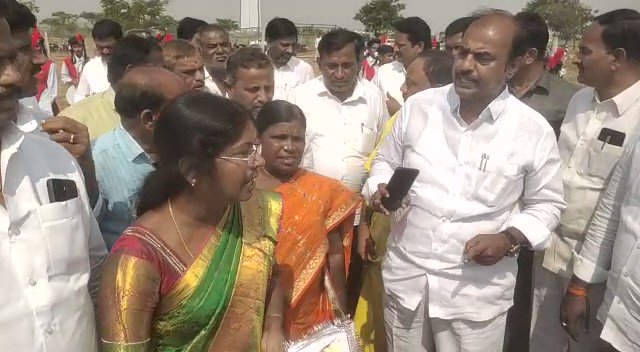 TRS (Telangana Rashtriya Samithi) MLA Krishna Mohan Reddy attacked and abused the Regional Coordinator of the Government Gurukula school. He was reportedly unhappy that the inauguration of the school was done in his absence. He was angry with the Zilla Parishad (ZP) Chairperson and officials as he was given the invite late and the inauguration was completed without him.

In the video that has gone viral on social media (SM), one can see that Reddy gets irritated upon learning that the function was completed before his arrival and pointed out that his invite was sent late. He snapped at the government official and held him by the collar before pushing him. Others present at the place calmed Reddy down.

The incident occurred on Tuesday (November 22) in the Jogulamba Gadwal district. It must be mentioned that the ZP Chairperson Sarita inaugurated the school. While he was angry at Sarita for conducting the ceremony, an official standing behind passed some remark (which is not very clear) and after that Reddy rushed towards him suddenly.

“The MLA later clarified that he did not deliberately attack anybody. He said he got angry when the official remarked that it does not matter who inaugurates the school”, Times Now quoted Reddy as saying.

“We haven’t received any complaint yet, we saw the video that went viral on social media, and if anyone lodges a complaint then necessary action will be initiated”, said Ranjan Rathan Kumar, Jogulamba Gadwal SP.

Such behaviour stems from the belief of elected politicians that they are privileged and above the rest due to which others must bow to their demands. They forget that they are elected to serve the people and not boss over common people and officials.