On December 24, the twitter handle of the Tamil Nadu unit of the Bharatiya Janata Party @BJP4TamilNadu tweeted a cheeky death anniversary message. It was on the Hindu baiter and Dravidian Movement founder E.V. Ramasamy Naicker, known by the moniker Periyar.

The tweet said, “On the death anniversary of Maniammai’s father E.V. Ramasamy, let us resolve to support death penalty for the sexual abusers of children and create a society without such criminals.” Though the BJP removed the tweet in less than an hour, the tweet had by then gained traction, drew media attention and helped reveal lesser-known facts about not only Ramasamy Naicker but also the organisation, Dravidar Kazhagam, he founded.

A Tamil journalist, Madan Ravichandran – twitter handle @MadanRavichand4 – posted images containing extracts of what Ramasamy Naicker’s protégé C.N. Annadurai, who later went onto become a chief minister, had to say on the issue.

“Old persons like me should not think of marrying. However, if a such a thought were to come, why not marry a widow of 40 to 50 years. Why marry a young woman who is yet to taste the pleasures of life. Though thousands of reasons may be proffered, which chivalrous man will accept those.”

In another image, Annadurai is shown asking, “What is our mistake? By committing this undesirable act, why destroy our self esteem. Why cast upon us this indelible blemish? And who are we to bear this destruction.”

In a subsequent paragraph, the protégé asks the master (Ramasamy Naicker) why by entering this unacceptable wedlock he had cast upon his followers such a shame and that too when he is identified as a reformer.

The BJP’s tweet saw tweeple like, retweet and comment using the hashtag that meant ‘be it Periyar (Ramasamy Naicker) or a nobody’. This gained traction in such a short time that it was trending in the country with as much as 30,000 tweets sending it to the number one trending hashtag. 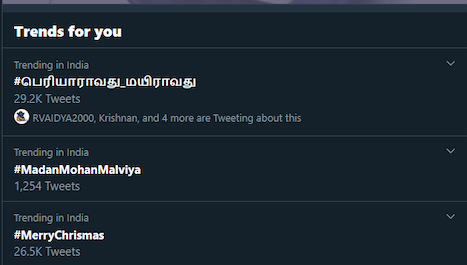 The BJP’s tweet, quite naturally, had repercussions as parties that subscribe to Ramasamy Naicker’s so-called rationalist and Dravidian ideology questioned its necessity. But the Dravidian parties’ criticism and comments only added fuel to the fire as tweeple exposed their hypocrisy, the idiosyncrasies in Ramasamy Naicker’s life, his pseudo secular and perverted approach to issues.

The tweet also showed Hindus asserting their strength and hitting back – something they could not do for long as they were at the receiving end of verbal and physical assaults from Ramasamy Naicker’s lackeys.

They also could not muster up the courage to expose Ramasamy Naciker, a deeply divisive figure in Tamil politics who observed Bharat’s Independence as a dark day, wrote to Muhammad Ali Jinnah seeking help in creating a separate Dravidian country, abused only Hindu gods though he claimed he was a rationalist, called Tamil a barbaric language and was anti-Dalit when it suited him.

This assertion is seen as the latest chapter in the exercise to rid Tamil Nadu from the debilitating influence of Ramasamy Naicker.