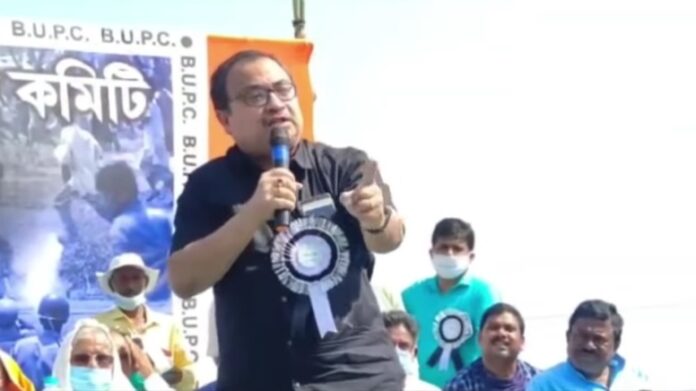 Courting controversies is nothing new for the Trinamool Congress spokesperson Kunal Ghosh. Infamous for making derogatory comments on Hindu Dharma and Hindu deities, using expletives for a political opponent is certainly not off-limits for this TMC cadre.

Staying true to his uncouth ways, Ghosh on Wednesday, November 10, attacked the Leader of Opposition (LoP), BJP’s Suvendu Adhikari with shocking expletives while addressing an audience in Nandigram on the occasion of Nandigram Dibas.

Crossing all limits of decency, the TMC spokesperson called the BJP leader a ‘traitor, ungrateful, beast’ and questioned his paternity. He accused Adhikari of dividing Nandigram on the basis of Hindus and Muslims, claiming that his political rival had called the Muslims ‘Jihadi’ and questioned how would he arrive at the Shaheed Bedi to pay respects to the martyrs of the Nandigram violence as there were also Muslims among these martyrs.

What a bitter-sweet irony that those liberals who claim terror has no religion for the past 70 years, have confirmed the religion of martyrs.

Ghosh further asserted that Mamata Banerjee is the mother of the Adhikari family as it was because of Banerjee that the father and son duo have established themselves in the Bengal polity. He also insinuated that Suvendu is a traitor because he left TMC and joined the BJP calling him a Bejanma, a Bengali slang that translates to base-born or bastard. Ghosh has forgotten that TMC has absorbed several BJP ministers, Babul Supriyo being a major one, just a few months ago?

Further, Ghosh also has strong objections to Suvendu asserting himself as a Hindu, and surfacing as the next much-needed face of Hindutva from West Bengal. Ghosh asserted, somewhat desperately, that he too is born in a Hindu family and so is a Hindu. “We have not given the agency of Hinduism to the BJP,” cries Ghosh in the public speech accusing Adhikari of polishing Amit Shah’s shoes.

When he was later asked if he will stop Suvendu Adhikari from reaching the Shaheed Bedi, the TMC leader answered that this is a democracy and they do not believe in stopping anyone from going anywhere. A brazen lie seeing how many times Mamata Banerjee’s government had opposed BJP members from coming to West Bengal and campaigning there, and also the frequent attacks TMC goons have launched on BJP programs and central ministers.

He also said that not only humans but many dogs and cats roam around in his area, another ugly jibe directed at Adhikari by comparing him to a stray.

It is evident that the representative of West Bengal’s ruling party has no consideration for general decorum or civility and the people of the state are not surprised at the way he has hurled vitriol at the LoP. The people of West Bengal know what Kunal Ghosh is.

Despite making loud and tall claims of being a Hindu from a Hindu family, Ghosh in October made a controversial statement saying “women were insecure in Ram’s kingdom,  Sita  committed suicide in humiliation” while addressing a Trinamool gathering in Tripura. Several FIRs have been lodged against Ghosh for disrupting law and order in the BJP-ruled state. Political analysts say that TMC is trying to create unrest in BJP-ruled Tripura to shift the focus from the horrific post-poll pogrom launched in WB against BJP workers/supporters and their families by the TMC; those serious crimes are currently being probed by CBI on High Court orders.

Coming back to the TMC spokesperson’s derogatory outburst against the state LoP, we would like to highlight that the TMC party along with its supporters in media had created a huge debate around the Prime Minister addressing a woman as “didi… o … didi”. It will be interesting to see what the self-appointed moralists who were acting all riled up against the PM will do to curb the never-ending stream of foul-mouthed invective gushing from TMC leaders.