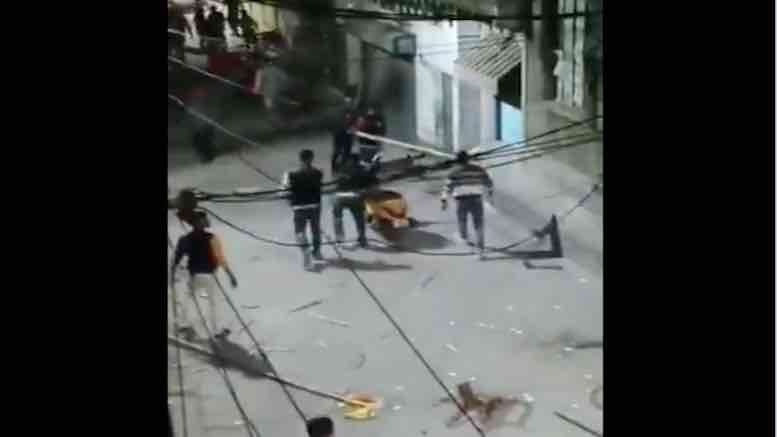 Trinamool Congress’s Englishbazar MLA Nihar Ranjan Ghosh’s house and party office were vandalised by some miscreants on Monday night. Ghosh has alleged that former State Minister and Trinamool leader Krishnendu Narayan Chowdhury and his follower District Youth Trinamool Congress President Prosenjit Das, along with about 150 armed miscreants carried out the planned attack on his house.

He mentioned that the attackers were armed with iron rods and destroyed furniture at random. Five motorcycles parked in front of his house were smashed. The women of his family also were not spared and were beaten up.

“I was at the Party Office with workers when around 150 people suddenly came and started vandalising everything” the MLA alleged. CCTV footage clearly showed the enmity within the ruling party in the area. Stones were thrown at Ghosh but he somehow survived.

“Chowdhury and Das led the attack. Their followers tried to kill me. The duo is trying to stop my political activities. The goons threw stones at me, ransacked my office and vandalized some two-wheelers parked outside the house. I am going to inform the state leadership,” Ghosh said.

Prosenjit Das totally denied the incident and said, “On Monday morning, there was a quarrel between Chottu Saha, a local businessman and Ghosh’s wife. Some followers of Ghosh allegedly thrashed Saha for quarrelling with her.”

“The businessman’s wife lodged a complaint at Englishbazar Police Station. In the evening, Ghosh was spotted with the youths who allegedly thrashed the businessman. This led to another quarrel. The allegation against me and Krishnendu Narayan Chowdhury is completely baseless,” said Das.

“We have received a complaint and a probe is on,” an officer from the Englishbazar Police Station confirmed.The incident caused widespread tension in the area. Rapid Action Force and a huge Police Force went to the spot to tackle the situation.

In 2016, Ghosh won the assembly seat as an Independent candidate supported by the Congress and the Left Front alliance. Krishnendu Chowdhury resigned from the post of chairman of Englishbazar municipality. Nihar Ranjan Ghosh joined the TMC and became the new chairman.

According to a Hindustan Times report, TMC’s Malda district Unit President Mausam Noor said, “I am in Delhi but I have heard everything. Top leaders of our party have been informed. They will take action.” Krishnendu Chowdhury was incommunicado.

Cases of political violence by TMC in West Bengal is a regular affair. In Kolkata, last month at a BJP rally, BJP activists were pelted with stones allegedly by TMC workers. The rally was attended by Union minister Debasree Chaudhuri, state BJP chief Dilip Ghosh and ex-TMC leader Suvendu Adhikari.

In December last year, BJP chief JP Nadda’s convoy was attacked allegedly by TMC workers near Kolkata when he was on his way to Diamond Harbour in South 24 Parganas district to address a meeting of party workers. Hundreds of BJP workers have been lynched to death during Mamata Banerjee’s rule, such as the brutal hanging of 20-year-old Trilochan Mahato who had a note pinned to his body that said “This is what you deserve for working for BJP”.