Time to redeem promise made to Kashmir’s minorities 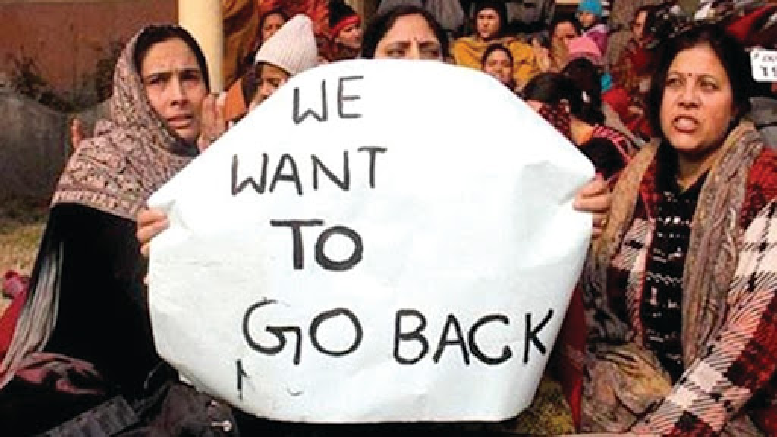 On 20th of August 2021, a delegation of Kashmiri Pandits and Kashmiri Sikhs led by this author met Dr. Jitendra Singh, MoS in PMO at New Delhi and presented to him a joint letter addressed to the Prime Minister, Narendra Modi.

The delegation requested the Minister that the letter may be presented to the Hon’ble Prime Minister, Shri Narendra Modi Ji for his favourable consideration and approval in context of the Delimitation exercise going on in the Union Territory of Jammu and Kashmir.

It may be recalled that the KP delegation already met the Delimitation Commission in March and July this year at Delhi and Jammu respectively and made its presentations before them and also forwarded to them the documents they desired.

The joint letter is signed by around one thousand prominent members of the minorities of Kashmir including Kashmiri Pandits, Kashmiri Sikhs & non-Kashmiri speaking Hindus of Kashmir living throughout the globe.

This is in connection with the plea for adequate representation of Ethnic minority, the Kashmiri Pandit (KP) Community and other minorities of Kashmir in the J&K Legislative Assembly and the Indian Parliament.

Some excerpts of the joint letter to the PM follow:

The Kashmiri Pandit (KP) community like those  who live  in the mainland  are fortunate to have  a Government, in  Delhi, led by your good self  which  apart from being conscious of the nationalistic imperatives,  is alive to the aspirations and sensitivities  of 1.3  billion Indians, without any distinction of caste, creed or colour. Under the guiding principle  of  “SAB KAA SATH SAB KAA VIKAS SAB KA VISHWAS”, your  Government is striving hard to better the  lot   of  every  Indian.

With  your  firm  belief  in carrying all sections together, on the road for nation’s development, we the members of Kashmiri Pandit Community, who are the Indegenous  people of Kashmir, crave for your indulgence  for the following submissions, and  are sanguine that our Prime Minister will be kind enough to give considerate attention to these important long pending issues with the purpose of ensuring their timely and justifiable redressal.

More than 30 winters of Kashmir have now passed along with an equal number of very long mainland summers since the entire population of around 7 lakhs of highly literate and peace loving  nationalist Kashmiri  Pandits (KPs) were made to leave their ancestral homeland  and subsequently forced to live in exile as refugees in their own country.

The National Human Rights Commission (NHRC) in its pivotal decision in June 1999 said that ‘acts akin to genocide’ were committed against the Kashmiri Pandits in Kashmir and a ‘genocide type design’ may exist against them in the minds and utterances of terrorists and militants.

Now 30 years and more into their dislocation, the advent of Spring in the lives of hapless KPs continues to be a distant dream. Scattered as they are presently, across the length and breadth of the country and globe, they find themselves bereft of their sense of belonging and the well known identity. They are forgotten and relegated to the  footnotes of history, with  acute socio-political exclusion and marginalisation.

We trust that your good self shall  redeem the promise extended to the KP community. Alongside, arrangements have to be made for a genuine political, economic and psychological empowerment of the community by reserving proportionate number of seats in the new legislative body  that will  come up  on the   completion of  ongoing delimitation process.

Reservation  of seats in the legislature  for the minorities of Kashmir (including KPs, Kashmiri Sikhs & non-Kashmiri speaking Hindus of Kashmir) is  a national imperative because they are so miniscule a minority as to  make it impossible for them to  reach the principal law-making body just on their own, mainly because (despite their numbers) they are scattered all over after forcible exodus from the valley engineered by enemy agents and terrorists.

KPs have been and will continue to be torch bearers of Indian nationalism in hostile terrain of Kashmir valley.  Pradhan Mantri Ji, it is the national duty of everyone to see their dignified return to and retention in the Valley, with assured political, social and economic rights flowing to them, uninterrupted and creation of conditions in valley to ensure that at any time in future, the community does not face another exodus and is able to live peacefully in valley along with other sections of society with dignity.

The Delimitation process  has  generated     hope    among     the  displaced KPs  that  a way will be found to ensure their political representation & empowerment. Accordingly, they approached the Commission with their well presented case for having  a statuary share carved out for them in the upcoming State Assembly.

The Sikkim Legislative Assembly has one seat reserved for Buddhist Monks who live in Monasteries across Sikkim. This constituency is not bound by geographical boundaries but spreads across  whole state like a floating constituency. The Supreme Court has in RC Poudial and another  versus  UOI & others (1994  SCC  Sup 1 324) upheld its constitutionality on the argument that though these Monasteries  no doubt are religious in nature yet they form a separate section of society.

The  Court   appreciated Sikkim’s Sangha Assembly seat and  characterized it as a perfect example of state’s unique political process to protect minority rights.

Puducherry Assembly has 30 elected members and in addition the Government of India is empowered to nominate 3 members  (with voting powers ) to the Assembly from  among   the sections of society who don’t have chances to reach  thereto  by  way of election. This model could be replicated in case of J&K UT also, to facilitate the KP representation.

In the  erstwhile J&K Assembly there was provision for nomination of two women   members   to the House, in order to correct the gender balance. On a similar principle, in the upcoming  Assembly, has to be maintained by ensuring representation of all sections –particularly the Ethnic minority of Kashmir viz. Kashmiri Pandits.

Art 331 of the Constitution of India, reserved   seats  in the Lok Sabha and made provision for State Assemblies to reserve seats for the  Anglo-India Community. Rationale behind the reservation was  that Anglo Indian community constituted a religious, social as well  as  a linguistic minority, and being numerically small community interspersed all over India, it wasn’t possible for them to  get  represented in a general  election.

The Delimitation Commission  is hemmed in by  the constraints of law. It may not be able to address this  demand of the KPs in the desired manner. It requires  amendments to the Constitution and any other relevant law. If clause A could be added  to  Section 36 of now repealed JK Representation of Peoples Act to have polling booths away from the jurisdiction of an Assembly Constituency to facilitate a displaced person to cast vote, similarly constituencies could be carved out for them to  ensure their representation in the  Assembly.

The head count of people  and geography are inalienably  integral to the whole electoral regime  of which the Delimitation of Assembly constituencies is an important component. Precisely, to mark the point, the Delimitation Act 2002  lays   emphasis on Census (Section 8) and compactness of Geography (Section 9)   for delineation of Assembly  or Parliamentary Constituencies.

For the  reasons mentioned, herein, above both Census and the Geography elude them. There has been no head count of them, nor do they  have  the Geographic compactness   to live in  present, with the result KPs stand thrown out of the electoral regime. This amounts to their disenfranchisement and denial of citizenry rights which are available to their compatriots in the country.

In addition, this constitutes a grave  violation of  Human Rights. There can be no worse  example of a whole ethnic community being for all practical purposes excluded from the electoral process. The situation goes against the letter and spirit of the Delimitation process.

Hon’ble Sir, the displaced KPs and other minorities of Kashmir look up to you as a Messiah who  would deliver them their due and ensure that the due rights -socio-political and economic– as envisaged by the Constitution of India, flow to them, smoothly.