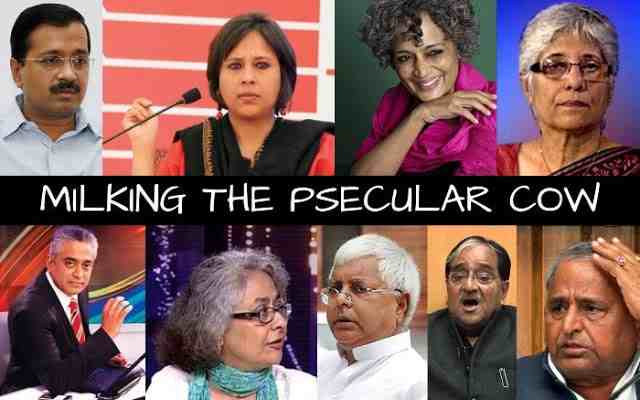 The award wapsi gang, the pseudo seculars and the so-called liberals were cantankerous and cacophonous on the killing of terrorist Burhan Wani, staging protests and raising anti Bharat slogans, inflammatory and provactive speeches, eulogising an international terrorist within the premises of an eminent institute named after our first Prime Minister.

Despicable and disgraceful as it may appear for a seat of learning to be used for empathizing with a terrorist, and by the same token vehement opposition by the same self-styled liberals to the installation of an army tank at JNU which symbolises Bharat’s unity, integrity and patriotic fervour and is a tribute to our armed forces who guard our borders.

The deafening silence of the liberals on Hurriyat’s anti-Bharat activities exposed by the NIA and the killing of the Amarnath yatris as also the killings  in Kerela expose their double standards and hypocrisy. Bharat’s brave stance on Doklam and it’s standing up to China has drawn the ire of the peaceniks and the liberals who would have been
more content to see Bharat cave in to Chinese posturing and war mongering.

What is most baffling and alarming is the fact that Jawahar Lal Nehru University situated in the capital of our country and in the name of our first Prime Minister has been over the years allowed to be converted into an epicentre of anti-Bharat and anti-national  rhetoric, slander and anti-Bharat sloganeering with disdainful arrogance much to the delight of the pseudo seculars and the so called liberals who are well entrenched in Lutyens’ Delhi. The question is, how could a seat of learning be allowed to be abused in such a manner right under the nose of the powers that be? Just imagine how such anti-national activities – where a nations flag is disrespected  and an enemy country’s flag is raised within a seat of learning –  would have been dealt with by a country like Russia, China or for that matter the leader of the ‘free’ world America.

The pseudo seculars and the pseudo liberals did not raise an eyebrow against the stone pelters who had the backing of the Hurriyat but were quick to criticise Major Gogoi who saved the lives of a few dozen against a rampaging mob by using one of those pelters as a human shield. Perhaps they would have been happier if mob frenzy had resulted in a few deaths which would have kept their anti-Bharat tirade on the boil.

It would be no surprise that the pro-Pakistan sentiment echoed in JNU from time to time could be the handiwork of pseudo seculars who are hand in glove with the Hurriyat and receive their instructions from the latter to rake and fuel anti-Bharat sentiment apart from material and moral support. Now that the Hurriyat coffers are dry and most of them are feeling the heat of the law of the land it would be interesting to see the mood at the campus amongst the pro-Pakistan camp.

37 schools were burnt down in the valley by the Hurriyat and the pro-Pakistani lobby throwing the life of thousands of school children in total disarray but the award Wapsi gang was conspicuous by its absence with not a word of protest. But rest assured, they have gone no where and are lurking everywhere waiting to extract their pound of flesh if there is a tragedy in Uttar Pradesh or a move to abrogate article 35 (A) in the valley.