Thus, history was made at the United Nations 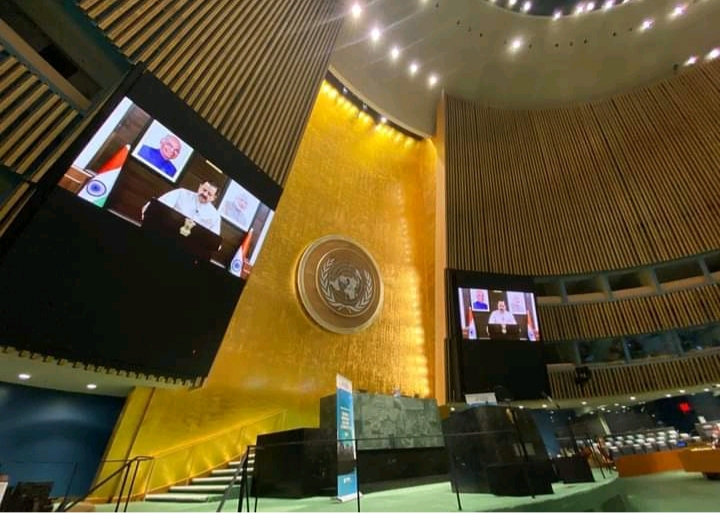 The United Nations General Assembly made history by listening to the son of the soil of Jammu and Kashmir when it observed a special session on June 5, 2021. The Minister of State in Prime Minister’s Office Dr. Jitendra Singh called for a strong and aligned international cooperation to combat the challenge of Fugitive Economic Offenders and Assets.

Addressing the United Nations General Assembly Special Session on Challenges and Measures to fight Corruption on representing government of Bharat from New Delhi in virtual mode, Dr. Singh said, Bharat has made it clear that the world is presently combatting another serious emerging challenge of Fugitive Economic Offenders and Assets which flee across national jurisdictions.

He called for a strong international cooperation on the return of persons and assets sought for such offences, consistent with international obligations and domestic legal systems. The Minister said, the accused take shelter in foreign countries conceal the proceeds of crime in complex legal structures spread over different countries and jurisdictions. The gaps and weaknesses of international cooperation in this area are fully exploited by such fugitives to their advantage.

When Dr. Singh was addressing the UNGA, almost the same time, Pakistan made misadventure of ‘airdropping’ illegal weapons via their drone systems in the parts of Jammu and Kashmir. Immediately after the episode, the Jammu Kashmir Police in a joint operation with other security agencies on Saturday (June 5) recovered a huge cache of arms and ammunition from a vehicle on the national highway near the Qazigund area in Kulgam district and arrested two persons.

The mischief of Pakistan continued unabated and it continued while Dr Singh was preparing for his historical presentation. He conveyed Bharat’s appreciation to all the countries who are taking this fight ahead in the right direction by intensifying efforts, sustaining political commitment and decisive action, at all levels, against preventing and combating corruption by way of endorsing the United Nations Political declaration.

He added that Bharat provided Mutual Legal Assistance to the widest possible extent and it had strengthened its domestic law and widened the scope for international co-operation. The Doctor of Medicines, professionally, said that Bharat had a zero-tolerance policy towards corruption and the motto of the Government is minimum government, maximum governance with emphasis on transparency and citizen centricity.

It is for the second time in history that the UN was addressed by any personality of Jammu and Kashmir. Sheikh Abdullah’s February 5, 1948, speech in the UN Security Council is also historical. There is a coincidental mischief of Pakistan relating to both the developments.

Following Bharat’s complaint to the United Nations, the issue of Jammu and Kashmir was discussed extensively by the UN’s General Assembly and Security Council. Participating in these discussions, the then Prime Minister of the State’s emergency government, Sheikh Abdullah made a speech in the Security Council on February 5, 1948, criticizing the Pakistan-sponsored tribal invasion of the State.

He said, “I have heard with patience, attention and respect the statements made by the representatives of Pakistan and members of the Security Council, as well as the statements made on various occasions by the members of my own delegation… I have heard patiently to the debate in the Security Council, but I feel that I am rather confused. After all, what is the point in dispute? The point in dispute is not that the sovereignty of the Prince is in question, as the representative of Pakistan stated yesterday…..

The subject of the dispute before the Security Council is not the maladministration of the Princely State of Kashmir… the dispute revolves around the fact that Kashmir acceded legally and constitutionally to the Dominion of India…the tribesmen across the border have poured into my country. They have been helped and are being helped by the Pakistan Government, with the result that there is the possibility of a greater conflagration between India and Pakistan….

I and my organization never believed in the formula that Muslims and Hindus form separate nations. We do not believe in the two-nation theory, nor in communal hatred or communalism itself. We believed that religion had no place in politics. The situation was worsening day by day and the minority in our State was feeling very nervous….

While the raiders came to our land, massacred thousands of people — mostly Hindus and Sikhs, but Muslims too — abducted thousands of girls, Hindu, Sikhs and Muslims alike, looted our property and almost reached the gates of our summer capital, Srinagar, the result was that the civil, military and police administration failed. The Maharaja, in the dead of the night, left the capital along with his courtiers, and the result was absolute panic. There was no one to take over control.  This is the manner in which the administration changed hands. We were de facto in charge of the administration. The Maharaja, later on, gave it a legal form….

I was explaining how the dispute arose — how Pakistan wanted to force this position of slavery upon us. Pakistan had no interest in our liberation….. Pakistan would have supported us when thousands of my countrymen were behind bars and hundreds were shot to death. The Pakistani leaders and Pakistani papers were heaping abuse upon the people of Kashmir who were suffering these tortures.

Then, suddenly, Pakistan comes before the bar of the world as the champion of liberty of the people of Jammu and Kashmir….I had thought all along that the world had got rid of Hitlers and Goebbels, but, from what has happened and what is happening in my poor country, I am convinced that they have only transmigrated their souls into Pakistan….

If Pakistan comes forward and says, “We question the legality of the accession,” I am prepared to discuss whether or not the accession of Jammu and Kashmir to India was legal. Under those circumstances, both the Maharaja and the people of Kashmir requested the Government of India to accept our accession.

History got created after 73 years on June 5, 2021 when Dr. Jitendra Singh, MoS in PMO outreached the same platform and made it known to the world that India has travelled a long distance and Jammu and Kashmir has prospered like any other state or UT of India for the last seventy three years while Pakistan continues to be busy in its old tricks and treachery.

He after his historic address told the waiting group of officers of the government and the media representatives,  “At a time when the world is faced with the problem of fugitive economic offenders trying to escape by running across the countries, thus  posing economic and security challenges, this is indeed the most appropriate time for all the countries to come together and strengthen the  international cooperation to prevent and combat this menace. India and the Government headed by our Prime Minister, Narendra Modi is ready to work with all other nations in this context”.