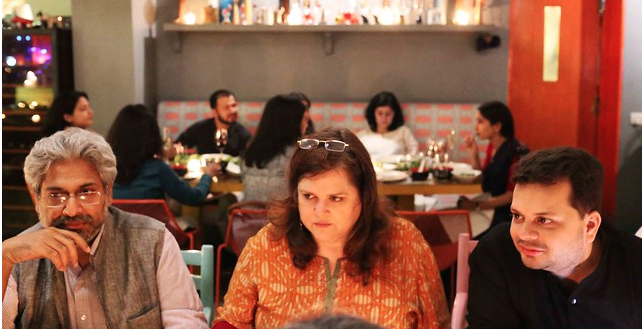 This note is not a response to Sadanand Dhume, but to the Khan Market Gang (KMG), of which Dhume is a member of the American branch. The views expressed in his article in the Wall Street Journal reflect the Khan Market Consensus.  It is this Consensus that drives the writings in journals within Bharat and outside, including the views of the editorial boards.

Thus we have a cover story in Time magazine calling Bharat’s prime minister, Narendra Modi, as a great divider, written by a British author born of a union of a prominent Bharatiya journalist and a prominent Pakistani politician who was recently assassinated for standing against the blasphemy laws in his country. Being a cover story, I think it is fair to say that the essential theme reflects the views of the editorial board of Time.

The article by Dhume in the Wall Street Journal is titled “Does Modi Threaten Indian Democracy?” with a subtitle: “His party now has virtually untrammelled power, though state governments are an important check” and is published in the May 30, 2019, edition. In promoting the article through the tweet above, Dhume says that ‘some’ Indians are worried about the consequence of success of the BJP which won 303 sears (an increase of 21 seats), while the alliance that it headed (National Democratic Alliance) won another 49 seats (down 5), in the just concluded elections to the Lok Sabha.  An absolute majority in the Lok Sabha is 272 seats.

Who exactly are these ‘some’ Indians?  Dhume says in his article: “On May 23, the night the results were announced, a few dozen prominent journalists, think tankers, lawyers and portfolio investors—members of an English-speaking elite that sees itself under siege—gathered at a rooftop party in a tree-lined neighborhood in South Delhi.”  The profile of those who gathered fits exactly the description of the KMG.  (I wonder if the original purpose of the gathering was to celebrate what the Consensus had confidently projected – namely that Modi would most probably not return as the prime minister, and if he did it would be as a weak prime minister, and the KMG would then be once again seen to rule the nation.  If so, then the gathering turned out to be a mourning and not a celebration!)

At this gathering, the KMG arrived at a Consensus that Modi is a threat to democracy. The article does not enlighten the reader the basis on which the Gang arrived at the Consensus. While it may not have been obvious at the time of the gathering, by the time the article was written Dhume would have realised that the elections of 2019 have clearly shown that the people of Bharat are no longer willing to accept anything and everything that the KMG dishes out, just because they say so. The people would want to be told why Modi is a threat to democracy.

In January 2019, Raghav Bahl (a member of the KMG) had said in a video: “Members of Lutyens’ Delhi are some of the sharpest minds in India. Their argument and criticism is nuanced, intelligent, and pregnant with actionable insights.” So, I would like to suggest to the Gang that they use their alleged sharp minds and list out specific instances, in his nearly eighteen years of public life in electoral politics, of thoughts and/or deeds by Modi that they consider to be a threat to democracy. They should also explain why these thoughts/actions are a threat, and whether there is a pattern which would make people afraid.  And then a sane conversation can start.

The Gang is demanding that Modi prove them wrong, without even saying what it is that Modi has done wrong. What the Gang also does not understand is that they are very few in numbers. Dhume said that the attendance of the gathering was ‘a few dozen’, which normally means about fifty. And that too from a really miniscule section of society, where a feeling of entitlement rules the roost, without feeling it necessary that they should earn by contributing to the well-being of society.

In contrast, in the 2019 elections, the BJP got an additional 54 million votes over 2014, which is an increase of 31% over the previous election.  And, in 2014, the BJP got more than double the votes than in 2009, an increase of nearly 90 million in absolute terms. Let the KMG talk about democracy considering such data which is available in public domain.

Of course, a tactic often used by the members of KMG is to put out a statement often enough and make it look like it is based on data and proper interpretation – a tactic perfected by the Nazi propagandist Goebbels.  And because it is repeated in multiple publications by multiple persons, a false narrative is created that what is dished out is conventional wisdom.

The people of Bharat have never tolerated such lazy analysis. Internet, a truly democratic tool as Dhume had once observed, has allowed their views to come to mainstream discussions. The KMG, including Dhume, is resisting this phenomenon because they will now have to put in really hard work to justify their existence.

Dhume contends that much of Bharatiya media is a lapdog and not a watchdog. He also lets it slip out that this is a legacy issue and that the Congress party had benefitted in the past. The KMG had no problem when that was happening, because the sustenance for KMG was provided by the Congress party. Now that this sustenance is under threat, the members of the KMG are feeling under siege (Dhume’s words). So, the real problem is not that democracy is under threat, but that the sustenance of KMG is under threat. This has been the case since 2014, and 2019 has intensified the threat.

In any case, let Dhume establish by data that the media is a lapdog of the NDA government.  Many members of the English media – like Shekhar Gupta, Rajdeep Sardesai, Barkha Dutt, Karan Thapar etc. – are indeed senior members of the KMG, and they would consider it a serious blasphemy that they are being considered to be lapdogs of the present government. For example, Gupta has clearly stated in a recorded programme, post the announcement of the results, that he does not support Modi.

In 1970, the late Arnold Toynbee, a British philosopher and historian had said: “Today we are still living in this transitional chapter of world’s history, but it is already becoming clear that the chapter which had a western begin­ning, will have an Indian ending, if it is not to end in self destruction of the human race. At this supremely dangerous moment in human history, the only way of salvation for mankind is the Indian way – Emperor Asoka’s and Ma­hatma Gandhi’s principle of non-violence and Sri Ramkrishna’s testimony of religions.”

Today, an aspirational Bharat sees an opportunity to contribute to the world not just in terms of material aspects, but also in terms of spiritual aspects. To do this, there is a need that the dynamism of Hindu Dharma, including a robust democracy, has to be maintained. The KMG has an opportunity to do something positive by letting the people know why Modi threatens Bharatiya democracy.  And, if there is merit in what the Gang is saying, the people will work out a solution that will ensure that Bharat will fulfil what Toynbee had envisioned.