The farmers protest toolkit accidentally revealed by Greta Thunberg has done more to unmask anti-Hindu forces spread across the world, than anything else in recent times. A twitter thread by @disinfolab (website: thedisinfolab.org) does a deep dive on some of the key players in the global plot to malign Bharat’s image under guise of these protests:

The toolkit dropped by Greta Thunberg had many key players but the name of the foreign expert Pieter Friedrich was dramatic as he was the part of a true story we were working (about a group which tried every possible way to unsettle Bharat).

These series of events have been around everyone for a long but yet major stakeholders failed to notice this shift from proxy war to info-war/psy-war. Our attempt was to try & map this network, we did expect an elaborate design but the reach & depth of the planning was shocking.

The story starts from the 1980s, where Bhajan Singh Bhinder aka Iqbal Choudhary was funding a terror network for carrying out large-scale violence with the help of another terrorist Lal Singh & Pakistan’s ISI. Bharat escaped this attack, Lal Singh got arrested.

These attacks were part of a large conspiracy called K-2 (#Kashmir-#Khalistan), which was hatched in Lahore under the patronage of Amir-ul-Azeem, the secretary of Jamaat-e-Islami, and was supported by several others like the Uncle of the present S&T minister of Pakistan Fawad Chaudhry.

At the same time in the US Bhinder & his gang were involved in a major transnational drug trafficking & a DVD privacy network. In order to fund this network they managed to take control of the most prominent Gurdwara(Fremont Gurdwara in California) after a bloody fight within that Gurdwara.

Carrying the load of failed efforts to send weapons to Bharat and with the change of millennium, Bhinder decided to change his methods and shifted his focus to info-war against Bharat and make use of the online platform but for that he needed a fresh face.

This is when Bhinder finds a young Christian Missionary Pieter Freidrich, who had decent oratory & writing skills but was economically struggling – he was even ready to work as a security guard – and hence the offer to become an ‘expert activist was quite lucrative to refuse.

Pieter came on board & found a new role as an anti-Gandhi crusader. But it was important to provide credibility to Pieter, so a number of institutions & organizations were formed in the US – prominent being Organization for Indian Minorities (OFMI)

OFMI was purportedly set up for the cause of minorities in Bharat but had no Indian or Indian-origin minority in it. To further boost Pieter’s credibility a no. of books were published in his name through the company, Sovereign Star publishing registered by Bhinder in 2007.

The design seemed almost the replica of what was happening in proxy war except the weapons were replaced by #disinformation. However, the early attempts were not smooth, Pieter changed his name 3-4 times, writing books in various aliases, and also appeared in different names.

But the modus operandi was standard: get some books published in his name, few articles in compliant news portals, create some social media avatar and start connecting with social media amplifiers.

The Bhinder-Pieter duo first started their tirade against Mahatma Gandhi. The objective was to malign the image of non-violence associated with Bharat. But in order to dent Bharat’s image, it was necessary to provide an alternative narrative, so they portrayed Bharat as a ‘fascist state

Despite the elaborate planning, it was hard for them to get an audience & credibility in Indian media. But Pieter managed to hook up a significant following amongst Bharat’s major influencers. The beauty of the project is evident from the list of media & social media amplifiers. 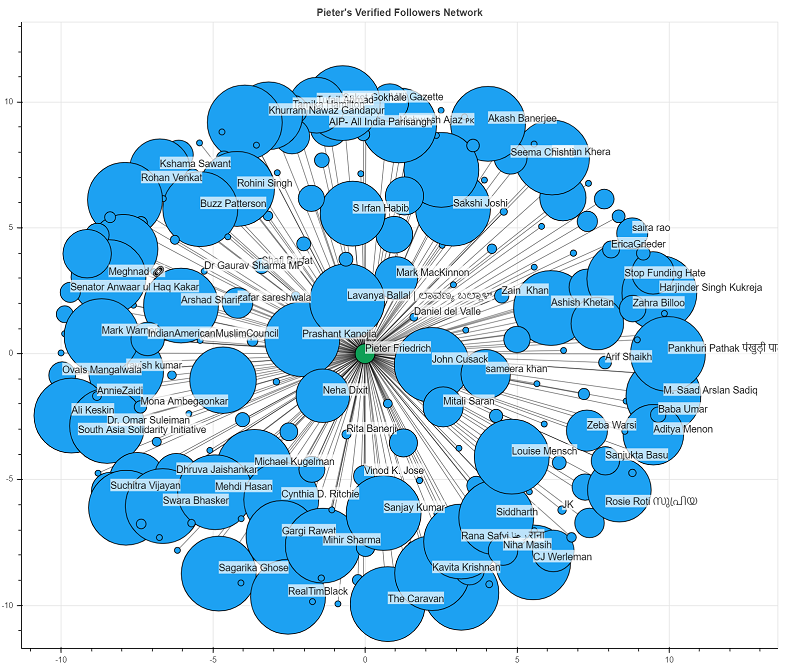 The brilliance of this operation was not merely the planning and execution- the makers also wanted to make it self-sustainable. Pieter had started fundraising for his ‘cause’, and claimed to have raised $30K. But all this fundraising was an added bonus to credibility.

Not surprisingly, a lion’s share in OFMI & Pieter’s promotion comes from Pakistan, from cabinet ministers to influencers & media. Fawad Chaudhry is one of the prominent promoters, whose uncle Choudhary Sr. had played a significant role in orchestrating the terror attacks in Bharat.

The OFMI & Pieter’s promoters might have been fooled by their projections –a White Expert & a US-based organization but they should have been aware of the nature & extent of info warfare ongoing against Bharat. Their fall for this charade is an irony of epic proportion.