The BJP seems not to value its friends and allies 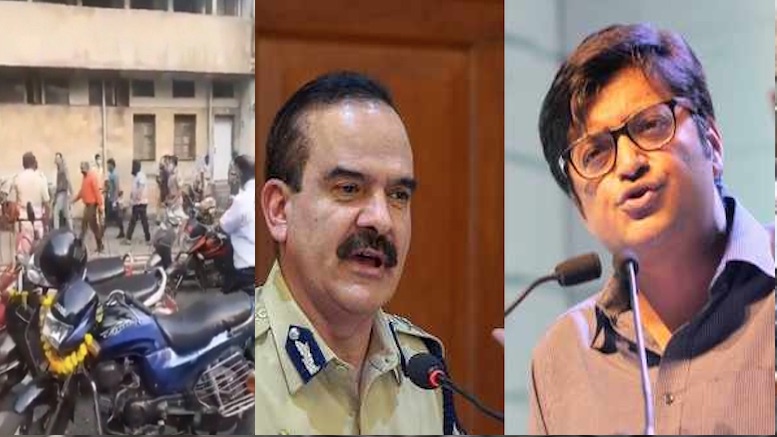 The video image of a young man being dragged to court by the police with a rope tied to his hands and the face under a shroud would ordinarily be associated with a terrorist or vicious criminal being brought before the law. Only that the person shown was an ordinary citizen named Sameet Thakkar whose chief claim to fame happens to be his sizeable following on Twitter. Among those who follow Thakkar’s tweets are Prime Minister Narendra Modi and some other bright sparks in the BJP. To be followed by Modi is a status symbol on the popular microblogging site. Rightist handles display it prominently in their profile, especially those with an identity crisis.

To be followed by the PM on twitter, however, is no guarantee against being hounded by minions of the law, especially in non-BJP ruled states. Thakkar discovered the bitter truth after his tweets on the shadowy workings of Maharashtra’s Maha Vikas Agadi (MVA) government got him the attention of the powers that be on both sides of the political divide. He was arrested by the Mumbai Police for addressing chief minister Uddhav Thackeray as a latter day “Aurangzeb”, and his mealy-mouthed minister son, Aditya, as “Baby Penguin”. Barring the usual protestations from Modi backers on social media, and statements from select ministers, none from the state’s biggest Opposition party, the BJP, bothered to take up the matter with the state government or question the police on the provisions under which bestowing anyone with colorful monikers like Aurangzeb or Penguin could be deemed illegal.

The BJP was never regarded media friendly in the best of times. Especially when compared to the Congress which goes out of its way to protect its cheerleaders. Atal Bihari Vajpayee was the sole BJP stalwart who got a good press from the Lutyens commentariat. He was considered the closest approximation of a liberal in the Sangh Parivar. The right man in the wrong party was how the poet-orator was viewed by his non-BJP admirers. Parivar hardliners, on their part, were not above calling him a conservative Nehru.  The Sangh’s brilliant ideologue and strategist, KN Govindacharya, paid a heavy price for labelling the late PM a mukhauta (mask). He was eased out of the party despite labored denials.

The Modi-Shah duo earned their spurs the hard way. The calumnious campaign run by the Leftist media against them after the 2002 Gujarat riots had the opposite effect: their political fortunes improved with every state poll. This convinced them, and rightly, that pampering the media beyond a point was just not necessary. Shah’s disinterest in initiating measures to stop the shocking persecution and victimization of a nationalist TV channel, Republic, by the venal Mumbai police may therefore have a context. The old grudge that since the national media did everything to smear Modi and his image, there is no reason to stick their neck out for them may well be at work. Political calculations on the longevity of the shaky coalition in the state may also be playing on their minds.

The travails of Republic, however, is not just an issue of saving a TV channel from the machinations of a rogue police commissioner. The unwillingness to act has willy-nilly sent the message that the Union Home ministry is impervious to the most blatant contravention of All-India Service Conduct Rules by officers of the Indian Police Service hounding the channel.

The argument that the Mumbai Police is only doing its job by serving their political masters, howsoever thuggish, does not hold water. No power on earth can compel the guardians of law  to slap patently false cases on the entire staff of a media house comprising nearly thousand journalists under an outdated 1922 law employed by the British to suppress disaffection against the Raj. The mendacious claim by Param Bir Singh that ARG Outlier Media Ltd. (the owner of Republic TV) had manipulated the Television Rating Points (TRPs) by bribing users to see their channel fell through after it was proved that the original FIR was against India Today. This was further confirmed when the channel’s editor and managing director, Arnab Goswami, against whom the conspiracy was hatched, released the official communication from the Broadcast Audience Research Council that Republic had nothing to do with the fake scam. It is BARC’s job to monitor television viewership patterns. The channel’s non-involvement and India Today’s complicity was also authenticated by the report from Hansa Research, the agency on whose findings BARC’s allegations were based.

Lie after lie stood exposed, compelling the police to keep shifting its goal post. The Supreme Court’s unwholesome observations on the excessive “intensity” of the probe sans evidence went unheeded. The police did not apply the slightest brake in its tendentious inquiry.. On the contrary the channel’s journalists and senior executives continue to be summoned at the Crime Branch every day and made to sit for 11-12 hours with the actual questioning barely lasting an hour or two. Details of the channel’s administration, accounting records, have been sought and submitted, but the hounding continues unabated. Efforts to cripple the channel’s finances by issuing summons to advertisers in the hope of frightening them away are also in progress. Three companies supposedly close to the Congress have opted out so far.

The police’s latest gambit of seeking access to the channel’s newsroom, the personal details of every journalist, their contact coordinates, login IDs, software details, news flow with broadcast rundown details, and weekly schedules of the news desk gives the game away. Any lingering doubts on the real purpose of the inquiry were instantly put to rest. That the case of alleged TRP manipulation was a mere ruse to begin a process of systematic intimidation to force Republic to close shop stood confirmed.

The question which the Union Home Ministry needs to ask itself is whether a police officer should be allowed to run amok despite violating every single norm in the rule book. Was any media house subjected to such relentless vilification even by the British when many indigenous publications openly advocated freedom from British rule. What motivates Param Bir? Is he acting solely on the orders of the Sena-NCP-Congress combine? That Republic earned the ire of the D-Company due to its relentless pursuit of the Sushant Singh Rajput murder case and the role of the drug mafia is not exactly a classified secret. A retired under-secretary of the home ministry, RVS Mani, has repeatedly alleged that the Dawood gang had pumped in 50 million bucks to ensure the closure of the channel, and that the whole conspiracy was hatched and piloted from across the border. Mani had exposed the complicity of Congress leaders in 26/11 and floating the fake “Hindu terror” theory a decade ago, and even authored a book on the subject. National Security Advisor Ajit Doval should ideally have summoned the retired officer to understand the basis of his charges.

Given the nature of our federal polity it is virtually impossible for the Union Home Ministry to directly act against an errant police official. Extraordinary situations, however, require extraordinary solutions. The Centre has enough powers to twist a state government’s tail if it really wishes. The test is how sparingly and deftly does it use its powers. That it has not thought it fit to invoke them shows it has priorities other than setting an exemplary administrative record. Pulling up the top cop of the Mumbai Police with a long record of venality would have cautioned others from over-stepping their professional boundaries.

The government obviously does not realize the long-term consequences of leaving its friends and allies in the lurch. The home ministry could have petitioned the SC to intercede in the matter. The Vishwa Hindu Parishad and the Bajrang Dal could have been pulled out of their dormancy, and directed to challenge the MVA regime’s anti-Hindu machinations. Moves on this score, in fact, ought to have been initiated immediately after the blood curdling public lynching of innocent sadhus at Palghar. Truth to tell, it is unlikely that their services will ever be used regardless of how pressing the need.