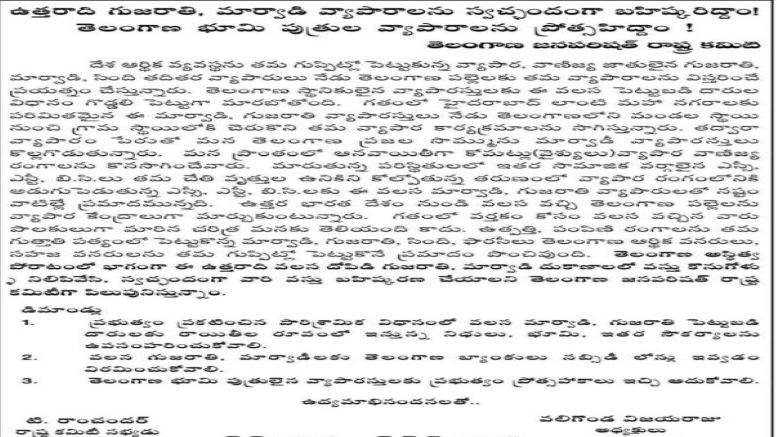 In a repeat of the TN boycott calls of Hindu Marwari businesses, a group calling itself Telangana Jana Parishad has asked for Gujarati and Marwari businesses to be boycotted. The appeals have been made in the name of bhumiputras (sons of the soil) who they insist want to subjugate the local populace and steal their businesses.

The business classes which have a stranglehold on the economy of India- Gujarathi, Marwadi Sindhi, and such other communities which are attempting to spread their tentacles to the villages of Telangana. This development will become the death knell for the local businessmen of Telangana. In the past, these communities were confined to big cities like Hyderabad but now they have spread up to the Mandal level and village level. Thus by doing business at such a large scale, the Marwadi businesses are looting the earnings and wealth of Telangana people. In our area, traditional business castes like Komati (Vaishya) used to carry on businesses. In view of changed circumstances, other communities from SC ST and BC classes have taken up business activities as their traditional occupations and crafts have declined. At this juncture, the nascent businesses of SC ST BC are likely to be adversely affected by competition from Marwari and Gujarathi businesses. Migrants from north India are making villages as their business centers. In the past, we have seen that migrants who came for trade and commerce became our rulers. This history is known to all. There is every dangerous possibility that the Marwari, Gujarathi, Sindhi, and Parsi which have a monopoly over production and distribution will extend their stranglehold on the natural and financial resources of Telangana. As part of the battle for the survival of Telangana, there is an urgent need for a voluntary boycott of migrant, looting businesses of Gujarathi and Marwari businesses. Telangana Janaparishad Rastra committee is giving out a call stopping purchase of goods from these communities.

While in TN it was the Islamists, in Telangana too similar break-Bharat forces appear to be trying to impose a boycott on ‘outsiders’. Such divisive language and rhetoric as seen in this note has the clear imprint of Naxals and far-left radicals. Both Telugu-speaking states are high on the radar of Christian missionaries as well who are especially targeting poor SC/ST communities, and hence their involvement needs to be probed as well.

The Telangana government needs to step in and ensure that anti-national vested interests are not at play here along with ensuring the safety and security of these business communities who are as much Bharatiyas as those from Telangana.