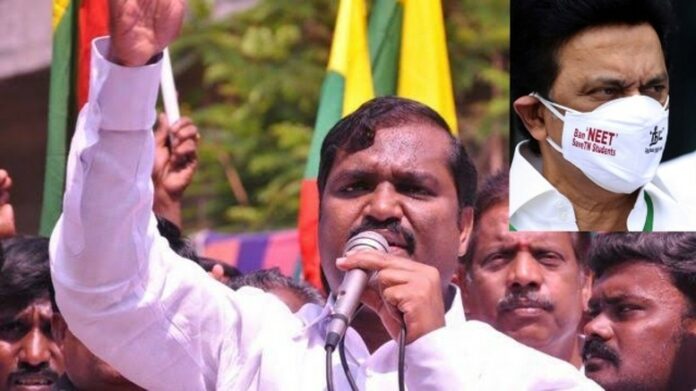 DMK has been opposing NEET since it came into effect, even though it supported it earlier when it was introduced by the UPA government. Many DMK leaders, particularly CM MK Stalin’s son Udayanidhi have been promising students that they’ll scrap NEET. In his election campaign speeches Udayanidhi said that as soon as DMK comes to power the first thing they’ll do will be scrapping NEET. Instead of encouraging students to prepare for the exam they have been making false promises to deceive the children.

In one of his assembly election campaigns DMK minister TR Balu even said that he would allow the students to cheat during the NEET exam when DMK comes to power. But now DMK ally Tamilaga Vazhvurimai Katchi’s(TVK) Velmurugan has said, “Copying is allowed in North states. Invigilators themselves give out the answers. So students from the North score high marks and grab most of the seats of speciality streams in PG courses in TN.”

He further demeaned NEET aspirants from the North by saying, “Similarly they’ll gobble up UG medical seats as well. We should never allow NEET which has been brought to give away the seats in colleges built on our land, using our (tax) money, for our people. I request our CM to talk to the civil society, student organisations and other political parties to organise a protest against NEET”.

While it was his own ally’s leader who said he will let aspirants copy in exams, Velmurugan has the audacity to accuse aspirants from Northern states of copying. He also appeals to a crowd that simply believes whatever lies told by the political class when he says all the seats are and “will be gobbled up by North Indians”. In reality 85% of seats goes to the state quota and only the remaining 15% can be given to students from other states.

One can see Dravidianists constantly boast of having developed the state on par with Scandinavian countries and of providing quality education even to the poor. They also often mock people from the North as paan wala, panipuri wala, etc. It is true that TN is better developed than other states in many aspects. But if that’s the case why would it be difficult for TN aspirants to crack NEET and other similar eligibility tests? It isn’t difficult. Even government school students have cracked NEET and DMK functionaries themselves have put up a hoarding congratulating them.

So students don’t seem to have any problem with taking one more test to prove their capability. Yet DMK continues to demonise NEET for political benefits and in fact paints the Tamil aspirants as mediocre. CM MK Stalin had written to the CMs of 12 other states seeking their support to repeal NEET. But there has been no information of even any acknowledgement from any of them. Despite opposing NEET in political forums, DMK honchos reportedly run NEET coaching centers. After ruining the lives of a generation in the name of anti-Hindi imposition, now DMK seems to be planning to ruin another generation’s lives by confusing them about NEET.

Feudalism aka casteism, the real face of Dravidian Model