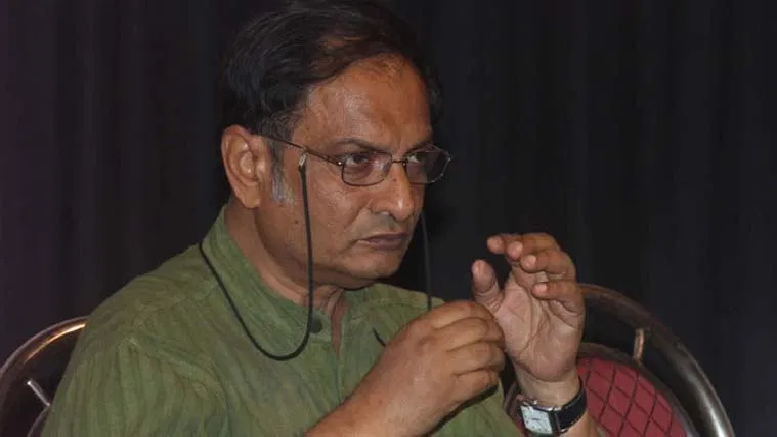 Before his arrest in May, 2007, Binayak Sen was hardly known to anybody outside Chhattisgarh. But after his arrest, there were protest demonstrations organized by civil society groups in different parts of the country and even in some cities outside the country.

Then the Indian Academy of Social Sciences declared Binayak Sen as the winner of R.R. Keithan Gold Medal for his outstanding contribution to the advancement of science of Nature-Man-Society and Sen was honoured with this award, in absentia, at the 31st.

Indian Social Science Congress held at SNDT University, Churchgate, Mumbai on 29th December, 2007. Again in April, 2008, while Sen was still in jail, the Global Health Council nominated him as the winner of the 2008 Jonathan Mann Award for Global Health and Human Rights and following this announcement 22 Nobel laureates had made an appeal to the government of Bharat to allow Dr. Sen to travel to Washington DC to receive the award.

On December 24, 2010, when Binayak Sen was sentenced to life imprisonment on sedition charges, there were wide-spread protests by civil society groups in many of the West-European countries against the injustice done to Binayak Sen and seeking his immediate release. 40 Nobel laureates had also made a joint appeal to the President of Bharat seeking the release of Binayak Sen.

It was the civil society groups, both within Bharat and outside, which played a prominent role in transforming a non-entity like Binayak Sen into an international celebrity within a short span of time.

By condemning and maligning the Bharat’s courts and mustering the support of so many Nobel laureates for the campaign to press for the early release of Binayak Sen, the civil society groups in the western countries showed blatant disregard for Bharat’s justice system, besides being guilty of gross interference in Bharat’s internal affairs.

The episode also demonstrates the eternal subservience of the Nobel laureates to the American and Norwegian political leadership. Bharat’s civil society groups also marveled in projecting how flawed is the system of dispensation of justice in Bharat. It also showed how international awards can be manipulated to bestow instant stardom on any person.

The Bharatiya government was also guilty of not only announcing a prestigious award for Binayak Sen, jailed for pro-Maoist links, but allowing a Planning Commission Member to honour him ‘in absentia’ at a public function. The whole episode was a vulgar display of manipulative politics designed to project Binayak Sen as a celebrity doctor who selflessly worked among the tribals and was unjustly branded as Maoist and jailed because of our flawed justice system.

It was rather funny to hear about an eight-member team of observers who came from the European Union to watch the proceedings at the Chhattisgarh High Court as to how the Bharatiya court was dealing with Binayak Sen’s bail application, as though he was such a big international celebrity.

The Supreme Court on April 15, 2011 granted bail to Dr. Binayak Sen and rejected the sedition case against the petitioner as baseless. The Bench pointed out that mere possession of Maoist literature does not amount to Sen’s involvement in Maoist activities.

Commenting on the development, civil society activist and Maoist supporter Swami Agnivesh said that the Supreme Court judgment will pave the way for the release of all social activists who are lodged in jail for having links with Maoists.

Within weeks of getting bail from the Supreme Court in connection with the charges of sedition, Binayak Sen was appointed by the UPA government as a member of Planning Commission’s Steering Committee on Health, which will advice the panel on the Twelfth Five Year Plan.

This government action had drawn considerable flak from the BJP leaders. Voicing his strong opposition to Sen’s appointment on Planning Commission’s health panel, Chhattisgarh chief minister Raman Singh pointed out that Sen has not been absolved of the sedition charges by the court, but just given bail.

A few days after the Planning Commission endorsed an advisory role for Dr. Binayak Sen, a study conducted at the UK’s Cambridge University termed his arrest as symptomatic of the problems faced by tribals in Bharat.

The study, funded by UK Economic and Social Research Council, criticized Bharat for continuing with the sedition laws introduced by the British in 1870. It said that the tribals who first suffered at the hands of the British, continue to be the victims of exploitation, now by Bharat and big business.

The paper titled “Understanding the conviction of Binayak Sen” is coauthored by Lawrence King and Jonathan Kennedy. Western scholars continue to drum up support for Binayak Sen through such studies, etc. at regular intervals.

The Supreme Court while granting bail to Binayak Sen had pointed out that merely by possession of Maoist literature one does not become a Maoist. But Sen had carried not only naxal literature but letters from Narayan Sanyal which were passed on to other Maoist leaders through Piyush Guha.

Maoist leader and politburo member Narayan Sanyal, who is undergoing imprisonment in Chhattisgarh jail, is not an ordinary leader. He had led the Naxalbari uprising in 1967 along with Charu Majumdar and Kanu Sanyal. He is thus a living legend. During his more than 40 years association with various naxal outfits, he has committed innumerable offences including murders. Binayak Sen had maintained very close relations with Narayan Sanyal and frequently visited him in the jail.

Between May 26, 2006 and June 30, 2007, Sen had met Sanyal 33 times and served as his courier for passing on seditious letters written by Sanyal to other comrades through Piyush Guha, a tendu leaf trader.

UPA government’s support for Maoist and other militant movement

The UPA government which had earlier shown its support to Binayak Sen by awarding him R.R. Keithan Gold Medal in absentia when he was in jail, again honoured him by appointing him as a member of Planning Commissions’ steering committee on health following his release on bail.

Sen was not acquitted, but was only released on bail. Couldn’t the government find a better person with clean records, rather than a life convict, for this assignment?

The UPA government’s sympathetic approach to naxal movement had resulted in the sabotage of a major anti-naxalite operation in Andhra Pradesh in 2005. About 30 top leaders of the CPI-(Maoist) including State Secretary Ramakrishna and some top leaders from Chhattisgarh and Bihar who were holding a secret meeting deep inside the Nallamala jungles in Prakasam district of Andhra Pradesh were encircled by special anti-naxalite Grey Hound Commandos on February 3rd, 2005.

However, the said operation had to be called off at the last minute because of an emergency directive from the Centre seeking an immediate halt to the operation so as to pave the way for a congenial atmosphere for peace talks with Maoists.

If there was no such intervention from the Centre, the police commandos could have gone ahead with their operation and captured or killed all those top Maoist leaders which would have broken the backbone of the Maoist movement in the country. The UPA government should be held accountable for all the subsequent Maoist violence and killings in the state.

It was only to get some sort of legitimacy to the UPA Government’s pro-Maoist stance that the Planning Commission under the UPA government had set up an expert committee in 2006 to make a detailed study about the Maoist problem and recommend necessary measures to tackle the same.

Bandopadhyay, a retired IAS officer, submitted its report in April, 2008. The report described the Maoist problem as a socio-economic one and said that it should be tackled with sympathy and understanding and not with force. On the other hand, the report was highly critical of the “Salva Judum” movement of Chattisgarh, and wanted a ban on it, despite the fact that Salva Judum was only an all-party people’s resistance movement formed in desperation by the villagers to defend themselves against the Maoist violence.

But the expert committee gave a clean chit to the Maoist movement, and sought a total ban on “Salva Judum”. Only two members in the committee, both former police officers, had expressed their dissenting voice.

The UPA government accepted the expert committee report on Maoism and now formally considers the Maoist movement as a socio-economic problem. The government also gave Rs.25 crore as special development assistance to sixty Maoist-affected districts for poverty alleviation programmes in 2010, which has now been raised to Rs. 30 crore for the current year.

As suggested by the expert committee, the government wants to adopt a conciliatory attitude towards the Maoists. Meanwhile there has been an unprecedented rise in Maoist violence in the country, especially in states like Chhattisgarh and Orissa since last two years.

In an ambush carried out by the Maoists in Rajnandagaon district of Chattisgarh, 30 policemen, including a superintendent of police, were massacred on June 12, 2009. In another brutal ambush staged at Dantewada of Chhattisgarh , 76 CRPF men i.e., almost one company of CRPF was wiped out on April 6, 2010.

In yet another ambush carried out by the Maoists in Narayanpur district of Chhattisgarh, 26 CRPF men were killed on June 30, 2010. While such killings continued at regular intervals in Maoist-infested areas, the government was still engaged in an academic debate over whether tough measures were really needed to curb the Maoist menace.

The government was clearly divided over the issue with the National Advisory Committee members still advocating caution and patience. The government thus maintains a cautious approach, while the Maoist violence continues unabated.

The first major decision of the UPA government after coming to power in 2004 was the abolition of Prevention of Terrorism Act (POTA), a move welcomed by all terrorist outfits in the country. Since then the UPA government had been showing extraordinary interest in holding peace talks with Maoists, ULFA militants, Kashmiri militants and also with Pakistan.

The fact that the National Advisory Council (NAC) is totally filled with civil society activists gives ample proof for this close links between Sonia Gandhi and the civil society. If our government itself supports all militant and secessionist movements in the country, how can our Bharat survive as a nation? (naxalwatch.blogspot.com)

The National Advisory Committee (NAC) chaired by Sonia Gandhi is functioning like a super cabinet, finalizing all draft legislations and commanding a say in all major decision making process, but without any accountability.

Narayan Sanyal joined the naxal movement in 1966 after leaving his employment with a bank. He was arrested in 1972 and was jailed for five years. He jumped the bail in 1977 and rejoined his colleagues to carry on with his party work in the party.

(The story was published on vpmthane.org and has been reproduced here in full with minor edits to conform to HinduPost style guide)