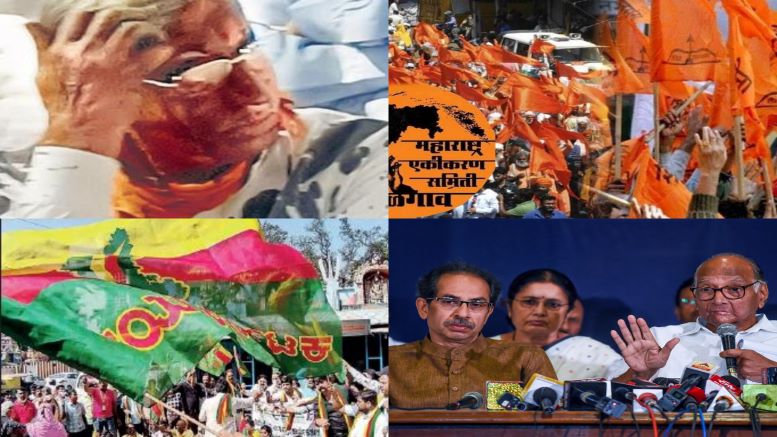 SS-NCP combine is now inciting Maharashtra-Karnataka tension using the Maharashtra Ekikaran Samiti (MES) as a front after Shiv Sena (SS) has failed in its attempt to constantly stir up the Belagavi issue.

MES attempted to foment in Belagavi on December 14 by holding Maha Melava despite not having obtained permission for the same. This led to verbal clashes between the MES leaders on the one hand and the police and Belagavi City Corporation officials on the other. Even as the Marathi activists continued to hold the convention, Kannada activists are reported to have appeared at the spot. Sampatkumar Desai of the Karnataka Navanirman Sena has been accused of blackening the face of MES leader Deepak Dalvi.

This provocation set forth a chain of vandalism across Karnataka beginning with Bengaluru’s ‘sensitive’ Sadashivnagar area where a statue of Chhatrapati Shivaji Maharaj was vandalized on the intervening night of 16 and 17 December. Miscreants had disfigured the statue by painting it black. Tension prevailed in Belagavi following the incident as protests were undertaken at the Dharmaveer Sambhaji Maharaj Circle by pro-Hindu organizations.

27 people were taken into custody while more than 100 persons were booked after protests in Belagavi took a violent turn. “Prohibitory orders are clamped in Belagavi and security has been beefed up across the city following flash protests condemning desecration of the statue of Shivaji Maharaj in Bengaluru, Shivajinagar area. The protest took place after the video went viral. The protest turned violent as mob indulged in stone pelting and damaged police vehicles. Later, the incident of vandalizing of the statue of the local freedom fighter Sangolli Rayanna has come to light complicating things further”, said an Economic Times report on the incident.

SS hooligans took this as an opportunity to target Kannadigas in several parts of Maharashtra on December 19. Shops and hotels owned by Kannadigas attacked in Kolhapur. Ink were thrown on vehicles bearing Karnataka registration plates on the Pune-Bengaluru highway. Similarly, Karnataka-registered vehicles were vandalized and Karnataka state buses were attacked with stones. Shiv Sainiks had targeted vehicles with Kannada boards in March this year as well.

If there was any doubt about the close links between MES and SS-NCP then one needn’t look beyond the Belgaum bypoll earlier this year when the MES candidate received the backing of both the NCP and Sena. Similarly, the rout of MES in the Belgaum civic polls where the ruling BJP scored a clear majority caused heartburn to the Shiv Sena as well.

“The defeat of the Maharashtra Ekikaran Samiti’s (MES) — a regional outfit fighting for the merger of Marathi-speaking villages of Karnataka into the western state — in the Belgaum civic polls is “unfortunate”, Shiv Sena’s Sanjay Raut told reporters.

MES had turned to NCP’s Sharad Pawar to end factionalism within its ranks. A report by FirstPost in this regard notes:

Riven by internal rivalries, Pawar’s visit to the region after a gap of 32 years, it was hoped, would help bring the warring factions together and help consolidate the Marathi linguistic vote in favour of MES. But Pawar, who was accompanied by former minister Jayant Patil and Kolhapur MP Munna Mahadik, restricted his visit to a call to MES leaders to sink their differences and work together. The only positive from the visit seems to be Pawar’s indication that NCP will not put up candidates against the MES and his promise of help to the MES candidates.

Relations between Pawar and the MES had soured over three decades back when the MES rejected Pawar’s proposal to establish a new Belgaum near Shinoli, a village in Chandgad taluk of Kolhapur district of Maharashtra. However, the NCP now seems keen to enter Karnataka politics as a mainstream party using MES as its gateway into the state. NCP leaders have visited Belagavi twice in the past six months and Pawar is scheduled to visit Nippani again next week.

Earlier, MES had protested when ED had served notice to Pawar and its president Deepak Dalavi said BJP was trying to threaten opposition leaders for political gains while adding “If it continues, MES will intensify the agitation”.

SS has always been a parochial regional party with a proclivity to violence against people from other parts of the country as one Twitterati rightly pointed out.

These incidents show the parochial outlook of most regional outfits like the Sena that the so-called intellectuals hold up as champions of federalism! Such divisiveness and regional faultlines is what the Nehruvian Idea of India lobby thrives on and hence it hates Hindutva or rise of civilizational Dharmic consciousness.