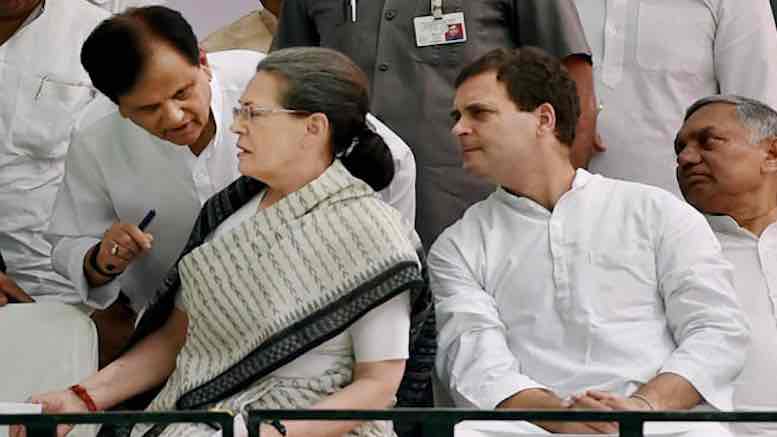 Congress president Sonia Gandhi condoled the senior party leader’s demise, saying she has lost an “irreplaceable comrade, a faithful colleague and a friend..whose entire life was dedicated to the Congress Party.”

An ace troubleshooter who architected many back-room deals to keep coalition partners happy during UPA 1&2, Ahmed Patel was widely known as the right-hand man of Congress President Sonia Gandhi, and was arguably a bigger power centre than nominal PM Manmohan Singh.

Sanjaya Baru’s book ‘The Accidental Prime Minister: Making and Unmaking of Manmohan Singh’ reveals how Patel often acted as a conduit to relay Sonia Gandhi’s instructions to the PMO. ‘All roads to Sonia Gandhi pass through Ahmed Patel,’ was the refrain in Lutyens’ Delhi .

There are several corruption scams implicating Ahmed Patel, a loyal servant of the Congress first family.

Foremost was the Rs 3,600 crore AgustaWestland chopper scam. An Italian court judgement from 2016 convicting AugustaWestland chief Giuseppe Orsi had named Sonia Gandhi, her secretary Ahmed Patel, and others including bureaucrats and Air Force officers as recipients of kickbacks. Rajiv Saxena, prime witness turned approver in the scam, had also recently named Ahmed Patel as one of the politicians who had received kickbacks in the chopper deal. However, the case is still winding its way through Indian courts.

Ahmed Patel’s name had also cropped up in the Rs 14,500 Sterling Biotech scam/Sandesara scam where he was questioned by the Enforcement Directorate in July this year for 26 hours over 3 days. Patel was also summoned in February this year by the IT department over Rs. 400 crores worth hawala transactions and cash inflows to the Congress party.

One of the most disturbing allegations against Ahmed Patel remains his role in portraying the police encounter of LeT (Lashkar-e-Taiba, a Pakistani state-sponsored terror organisation) terrorist Ishrat Jehan and 3 others as a ‘fake encounter’. IB Officer Rajinder Kumar, who had supervised the IB-Gujarat Police joint operation against the LeT module in Ahmedabad, was made the fall guy for the ‘fake encounter’ theory when a CBI probe was ordered by the UPA government.

After convicted terrorist David Headley confirmed that Ishrat Jehan was indeed an LeT operative, Rajinder Kumar had stated that Ahmed Patel was behind the witch hunt against officers in the CBI case lodged to defame and fix Narendra Modi during his stint as the Gujarat chief minister.

During the 2017 Gujarat assembly election, a Facebook post by former director general of the Pakistan army Sardar Arshad Rafiq, had pushed for Ahmed Patel as the next Gujarat chief minister.

Ahmed Patel was close to not just Sonia, but her husband Rajiv and mother-in-law Indira as well. He was a Youth Congressi who started his political career by contesting local body elections in 1976, during the Emergency period. Within an year, he was chosen by Indira to contest a Lok Sabha seat from Bharuch, Gujarat, which he retained till 1989. He was made Parliamentary Secretary by PM Rajiv Gandhi in 1985. There are allegations of Ahmed Patel’s links with notorious underworld dons who ravaged Gujarat during the decades of Congress rule that finally ended with the first BJP victory in 1995.

“He would decide editorials sitting in #Delhi. Ensured the Family was protected. No questions asked. The op-ed pages editors had a direct line with him. Everyone obliged Delhi journalism circles…No one uttered a word and joined the loop. Journalism was not in danger those days. Fascism? What’s that? Everyone was ‘taken’ care. That’s how one builds an ecosystem.”