Some in Bharat need to stop their obsession with Pakistan 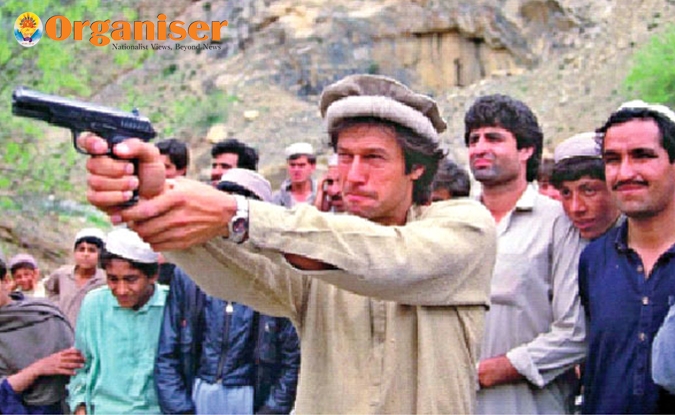 There was unnecessary coverage in Bharat recently on the visit of Imran Khan, the purported Prime Minister of Pakistan, to the United States of America. The snub given by Donald Trump, whereby no senior officials welcomed Mr. Khan and the casual low-level audience eventually granted by Mr. Trump was taken over the top by many of our media personnel, though the reaction was seen from varying perspectives.
While a nationalist bunch has clearly been crowing victory as a vindication of Bharat’s position, another set has again said that Mr. Khan should be given a chance by Bharat, given the fact that he is literally the proxy for the Generals of Pakistan Armed forces, and the power center lies in the GHQ Rawalpindi.

Frankly, either kind of coverage has been a big bore to watch, let alone the extremities about the coverage. It has been bordering on the ridiculous to see people engaging in shouting matches or mumbling away in pretentious sub-continental accent about why peace should be given a chance.

But more than the inability of the theatrics (or lack of it) to entertain the audience, I find it a real problem that so many people in Bharat are still obsessed with an irritant of a neighbour. Bharat is a three trillion dollar economy, while Pakistan just put its economic sovereignty on the auction block to secure a six billion dollar loan. Bharat’s soft power has gone far and wide, while Pakistan is the laughing butt of the world on many counts. While Bharat is sending space missions onto Moon and Mars, Pakistan is busier about Bharat’s tomato blockades and saying that they will use yoghurt as a substitute.

Point of the matter is that Bharat as a society and as a nation has moved far, far ahead of Pakistan. While maintaining relationships with neighbours are undoubtedly important, humoring those whose raison d’être is anti-Bharat-ism is plain ridiculous. Any kind of engagement beyond civility is frankly a waste of time, energy and resource.

Bharat is too big a country to be obsessed with Pakistan, and that fact should be recognized by the government and its foreign affairs machinery – a realization that has started to dawn and is seeing a realization on the ground as well. Whatever be its ‘geographical advantage’ as is being touted by some coup theory specialists, the stakes in Afghanistan should be mutually discussed with other countries, not with Pakistan which will again attempt to make it a launching pad for sending more terrorists into Bharat.
Moreover, we stand to lose nothing even if we do not engage in serious trade and diplomacy with Pakistan. A strong internal security apparatus and the ability to hit when necessary is how the problem should be dealt with.

In the past, many of our national leaders have developed what I can only call the Nobel Peace Prize mentality, wherein they think they can solve this problem. Frankly, the problem of Pakistan can never be solved, because it is not in the interests of Pakistan to have a peaceful, stable relationship with Bharat.

After all, what else binds a country that has to date only managed to split itself along linguistic, cultural and ethnic lines despite being a country founded on religious ideology that was supposed to bridge it all? Pakistan died in 1971, when Bangladesh became a separate country, and frankly this strange coagulation of people has nothing but a bleak outlook for itself, as it realizes its diminished, puny global position.
To even obsess in the media is frankly a waste of time, and it is better that so called aman ka tamasha activists also wake up and smell the coffee, and realize that a large majority cares two hoots about Pakistan unless it is about addressing terrorism. This repeated madness of hyphenating ourselves with Pakistan yields nothing more than churlish behaviour that induces giggles among the global diplomacy circles and rolling eyes.

Some of us in Bharat have to stop our obsession with Pakistan. It will make the world take us even more seriously, for it will free up our resources to focus on things that matter more to us on the global diplomatic stage. Battling terrorism is necessary, but that should not mean that we should be binding ourselves to irresponsible behavior of certain countries.