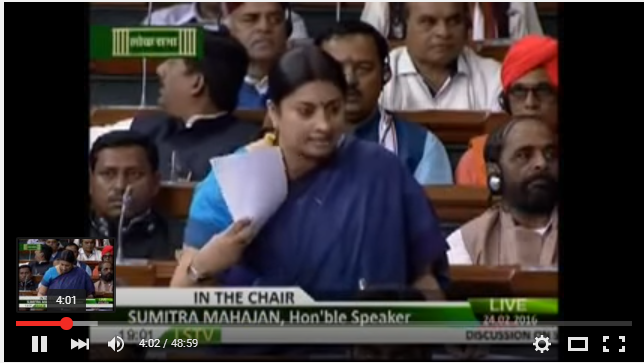 In an impassioned speech in Lok Sabha packed with facts, Union HRD Minister Smriti Irani gave a stunning reply to her political critics who have been trying to corner her over research scholar Rohith Vemula’s suicide and the recent events in JNU. Her speech laid bare the political charlatans who project themselves as the guardians of social justice and secularism in this country.

We will provide the breakdown of what the Union Minister said in a 3 part series. This first part will cover the politics around the suicide of Rohith Vemula; the second part will talk about the events in JNU; the third part will cover what Smriti Irani said about the insidious assault on Bharat’s education system by Sonia Gandhi led UPA and its deep impact on the Hindu psyche.

At this point there were loud interruptions by Opposition members, to which she said “You accuse us of intolerance, be tolerant and hear my answer. Or should I claim to be a victim of my circumstances and say that I am a woman married to a micro-minority (Smriti’s husband Zubin Irani is a Parsi), and hence you disallow me to speak in this House? Do not play your politics with me. Let me give you an answer today that I have patiently waited for days to give.”

At this point, there were loud interruptions and some opposition MPs walked out of the House. The HRD minister said,  “I am not going to apologize for doing my duty. If you want to leave, you may do so. You never wanted to listen to my response, you never had the intention to do so. You don’t have the courage to listen to what I have to say. You just want to do your politics. Listen to what I have to say, if you have the courage to do so.”

Smriti Irani on the Political Games Over Rohith Vemula’s death

At this point a TRS MP interjected, and said that after receiving Smriti Irani’s call, KCR (chief of TRS and the Telangana CM) had called Police Intelligence to enquire about the matter. He claimed that they had asked the Union Government and the PM to arrest MP Bandaru Dattatreya (Minister of Labour and Employment) in order to calm the mob which was preventing Rohith’s body from being taken away from the University.

Smriti Irani pointed out the absurdity in the TRS MP’s statement that Bandaru Dattareya should be arrested (without any due process of law) just to control a mob and to maintain law & order. [Some political parties and groups have alleged that it is a letter to HRD Ministry by Bandaru Dattatreya expressing concern over student politics in UoH that ultimately led to Rohith Vemula’s suicide. Read this piece to know more about the case.]