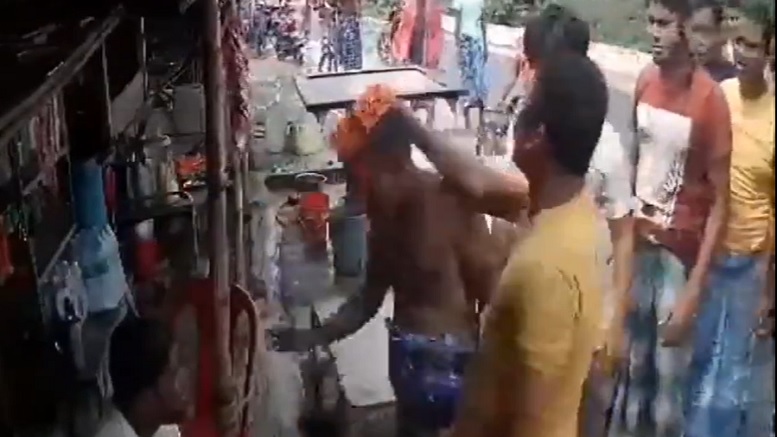 That political violence has taken deep roots in West Bengal since the bloody three-decade long (mis)rule of CPM, followed by the decade long  tyranny of Mamata Banerjee is known to all political observers. Add the growing Islamist menace and you have a volatile mix in which the ordinary citizen, especially Hindus, are victims of everyday lawlessness.

A shocking CCTV footage has now emerged which shows how anyone supporting the main Opposition party BJP during the ongoing assembly elections is a legitimate target for ruling TMC-backed goons.

This is just an example. There 1000s of such incident happening in West Bengal daily. pic.twitter.com/25asRDlizo

The incident occurred on 29 March, day of Holi, at 1.23 PM as per the CCTV timestamp, but location is unknown. It shows a man wearing a BJP cap standing outside a small grocery shop. A BJP flag is hanging from the thatched roof of the shop.

A group of 15-20 men come walking by and one of them appears to question the man with the BJP cap. He then proceeds to remove the BJP flag. By then another man slaps the BJP supporter, while another smacks away his cap. A group of 4-5 men then accost a man who appears to be the shopkeeper, continuously raining slaps and blows on him. Finally, some other bystander intervenes.

We often hear about political murders from Bengal and Kerala. In West Bengal alone, around 120 BJP leaders and workers have been murdered in the last 2 years alone  while hundreds more have died in Communist & Islamist dominated Kerala. But beneath the statistics, MSM and intelligentsia’s silence, and the handful of names that only the Hindu ecosystem remembers  – Trilochan Mahato, Nandu Krishna etc – lies a tale of everyday terror that ordinary Hindus endure. Hopefully, that story will be told one day.