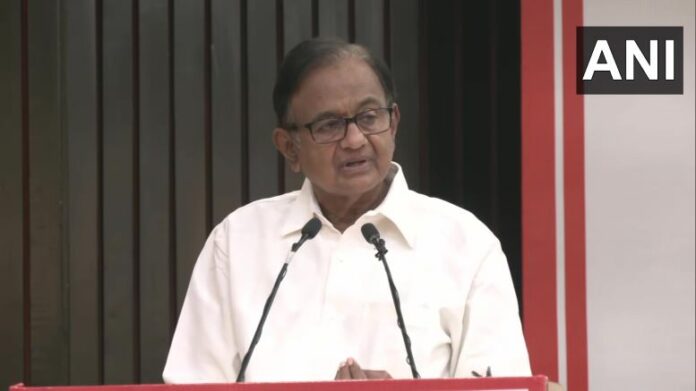 The RJB (Shri Ram Janmabhoomi) journey has been a long and arduous one for Hindus with the patience of the majority community ultimately paying off. However, expecting an anti-Hindu party like Congress to respect the sentiments of the majority is too much. Therefore, it is hardly surprising that Congress leader Chidambaram terms the judgement incorrect just because Hindus won.

Such statements are to be expected from a party that has always attempted to deprive Hindus of their legitimate rights. It is a good time to remind readers of another Congress leader, Shashi Tharoor’s tirade against Ram Mandir at RJB.

“After insulting the Hindu Community by his ‘Good Hindu-Bad Hindu‘ tirade, Congress leader Shashi Tharoor has now insinuated Hindus by saying that they should follow their own scriptures and stop violence to get their way to build Ram Mandir. Shashi Tharoor went on to say that Hindus should rather build Ram in their hearts”, OpIndia had said.

Congress even tried to delay justice in the RJB case and went to the extent of threatening then CJI Dipak Misra of impeachment following the judgement.

It is pertinent to note that senior Congress leader Kapil Sibal had appeared on behalf of the Sunni Wakf board along with other lawyers such as Rajeev Dhawan and Dushyant Dave who belong to the Congress Lutyens ecosystem. In 2017, Sibal had opposed the Supreme Court hearing into the civil appeals filed by various parties challenging the 2010 Allahabad High Court verdict on the Ram Janmabhoomi title dispute. Sibal wanted the SC hearing to be put off till July 2019 as the Lok Sabha elections were to be held latest by May 2019.

“What is the hurry? If your lordship is insisting it should be heard now and finished before the end of next year itself then your lordship must tell us why? It is perhaps the most important litigation in the history of the country. It’s going to be a judgment of such ramification, so a minimum of five-judge should hear it if not seven”, Sibal had told the court back then.

“Almost questioning the CJI’s integrity and casting aspersions on him, Sibal said the court should not be seen as helping the BJP with the Ram temple issue, one of the highlights in its 2014 election manifesto”, India Today had reported on the court proceedings.

Top lawyers especially those connected to the Congress ecosystem, enjoy the power and a sense of entitlement. Sibal, Dhawan, Dave, Nariman, Grover, Jaisingh, Subramanium etc feel it is their birth-right to decide which & when cases are heard, how the roster of judges is set, and how the Constitution should be interpreted.

Hence, the sense of outrage that CJI Deepak Mishra refused to bow to their tantrums to indefinitely delay an important case that had been hanging fire almost since Independence.

Sibal & Dhawan’s innuendo that the CJI is somehow a closet supporter of BJP or the Hindutva cause would normally have invited contempt of court proceedings against anyone else, but such is the clout that the Lutyens’ lawyers club enjoys that they went scot-free.

The left-liberal ecosystem was probably upset with CJI Dipak Misra because he had dared to deviate, if only slightly, from the liberal script – Justice Misra had refused to entertain the midnight petition filed by Lutyen’s high & mighty to stay the execution of terrorist Yakub Memon.

The meltdown of Rajeev Dhavan who tore the RJB map and issued a veiled threat to Hindus in the apex court is yet another proof of how Congress ecosystem lawyers get away with their brazen display of contempt for the country’s top court.

The RJB verdict has been a watershed moment in the country’s history and a major step towards correcting the historical wrongs done to the majority community of this country. The judgement isn’t right because both sides accepted it but because Hindus legitimately reclaimed what had been forcibly taken away from them by a barbarian named Babur.