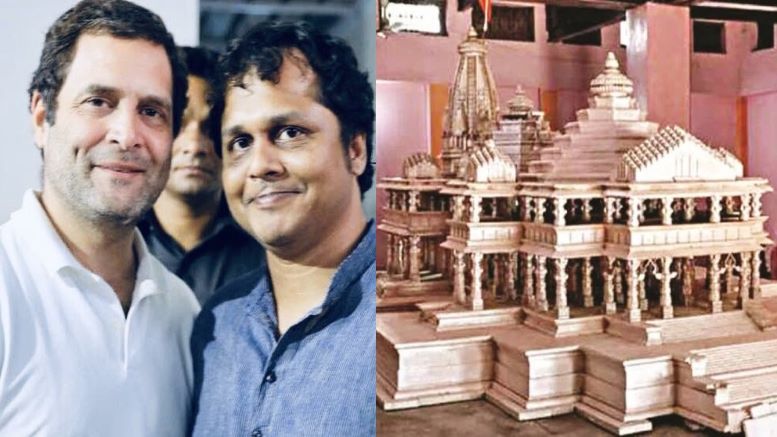 A noted ardent supporter of the Congress party, Saket Gokhale had filed a Public Interest Litigation (PIL) against the Ayodhya Ram Mandir Bhoomi Pujan with the Allahabad High Court on July 22nd, 2020. Gokhale sought a stay on the Bhoomi Pujan (ground-breaking prayer and ceremony), which will be performed on August 5th at the Ram Mandir site, claiming that the event is an infringement of the guidelines mandated by the MHA under Unlock 2.0.

I've filed a Letter PIL with the Allahabad High Court seeking a stay on the Ram Mandir event in Ayodhya in view of the Unlock 2.0 guidelines & in the interest of public health during a pandemic.

Dunno what comes out of it but we must not stop doing the right thing & speaking up. pic.twitter.com/LYBEwmJp2Q

The Congress supporter, speculating that the Pujan may prove ‘bad for public health’ in view of the Chinese Coronavirus pandemic, demanded that the High Court put a stay order on it. He then questioned if an exemption had been issued for the Bhoomi Pujan and the grounds on which it was issued. The same was brought to public notice by Gokhale who took to Twitter and announced the same.

His petition attracted massive responses from those who supported his stance as well as Ram Bhakts who were outraged by the implicit Hinduphobia of the act. Twitter user Irfan Ahmed called the Bhoomi Pujan ‘appalling’ and found it to be tactical appeasement of the majority.

More power to you @SaketGokhale

However, some users sarcastically dared him to file a similar PIL against Tablighi Jamaat chief, Mohammad Saad.

However, it came as a major setback to the anti-Ram Mandir lobby when the Allahabad High Court dismissed the petition filed by Gokhale. The High Court observed that the petition was filed on the basis of assumptions with no concrete reason against the Bhoomi Pujan. Chief Justice of the HC Justice Govind Mathura and Justice Saumitra Dayal Singh had heard Gokhale’s plea before quashing it for being unfounded. 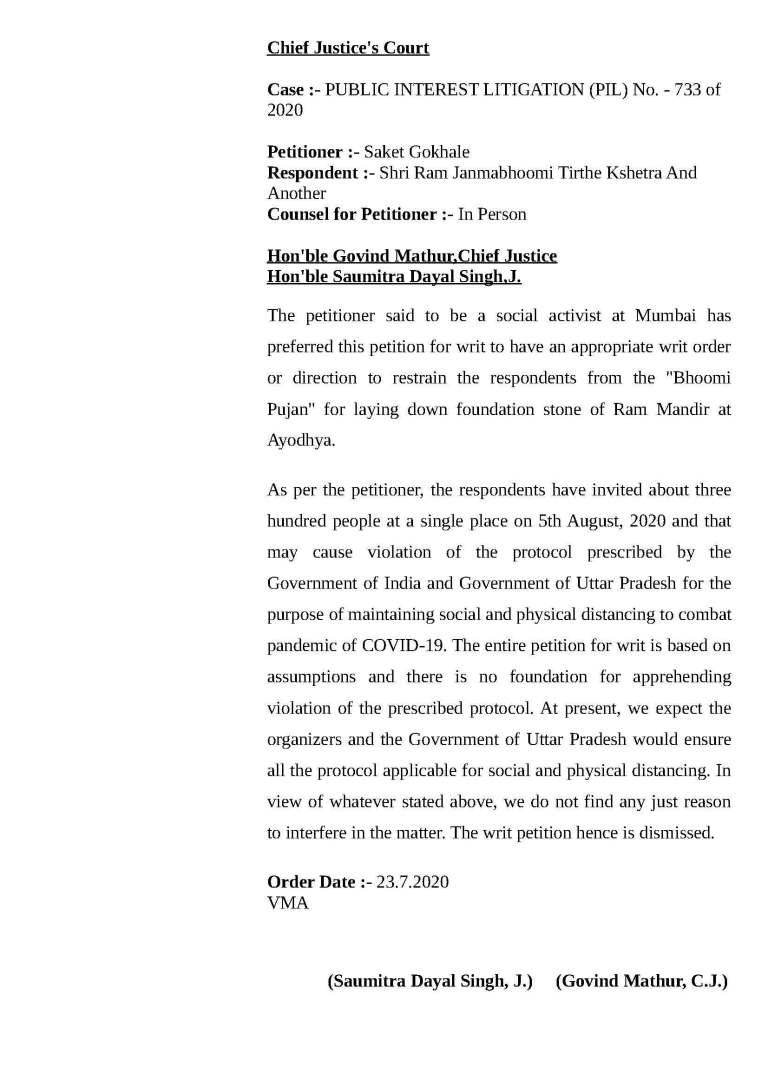 The HC also stated that the Uttar Pradesh government as well as the organizers are expected to follow all the protocols of Unlock 2.0 and ensure strict social distancing.

“In the view of whatever stated above, we do not find any just reason to interfere in the matter. The writ petition is dismissed.” pronounced the High Court bench.

Meanwhile, Maharashtra CM Uddhav Thackeray, again stirred the pot by suggesting an ‘e-bhoomi pujan’, a suggestion which promptly drew ire of sages who explained that the ceremony has religious significance and sentiments attached to it and is not some government meeting which can be held on the internet.

As per Sri Ram Janmabhumi Teerth Kshetra Trust, the entire ceremony will be telecast live on Doordarshan and other TV channels, and they have requested all devotees to join from their homes or nearby temples. Full arrangements have been made to ensure social distancing between ~ 200 guests.

After a prolonged struggle of 500 years, Shri Ram will finally get back His abode at his place of birth. The final judgment in the long-standing dispute was given by the Supreme Court on 9th November 2019 in favor of constructing the Ram Mandir on the 2.77 acres of disputed land. It is estimated that the construction of the magnificent temple would take around three years to complete.