10 Times Rahul Gandhi made headlines for all the wrong reasons The ever-youthful Rahul Gandhi, the young leader of the grand old party turns 50 this year. On this special occasion, we recall 10 times the Gandhi scion made headlines, albeit, for all the wrong reasons.

Rahul had still not entered the political scene of Bharat, but he was the central figure around whom Congress aspired to build itself in the years to come. Soon after the Mumbai terror attack of 2008, an eminent daily revealed that the Prime Minister hopeful had been partying shortly after the ghastly attack on the financial capital that sent shockwaves around the entire country. The senior journalist was never known to be a fan of the Congress, the Gandhi family, and the Gandhi scion. With his wide and profound political awareness and the equal absence of it on Rahul Gandhi’s part, it was a cakewalk for Arnab Goswami to rip a rather unprepared and ill-informed RaGa asunder. This interview will go down in history, but we doubt Times Now’s celebrated guest will like it.

His 60-days-long disappearance from February 16 to April 16, 2015, had attracted a lot of flak and handed his opponents a golden opportunity to label him a “part-time” politician who makes assorted appearances only during elections. The then INC Vice President had allegedly commenced his trip of four South Asian countries just days ahead of Parliament’s crucial Budget Session. This was shortly after his party had lost the 2014 election, and could garner just 44 seats in the Lok Sabha.

In November 2015, while addressing the students at Mount Carmel College in Bengaluru, Gandhi threw a question to the students sitting before him: “Do you think Swachh Bharat is working?” He was stumped when the majority of his young audience replied with a resounding ‘Yes’. Seeing his tactic failing, the Congress leader asserted, “I hear talk of ‘Clean our Country’. Are we serious? Do you see it’s working? I don’t.” The students booed him away.

Back in September 2016, Rahul Gandhi held a Kisan Yatra in the election-bound Uttar Pradesh. Chaos struck the gathering soon after he wrapped up as his many of his audience scampered to collect the khats (rope beds) arranged for seating the audience. The loot was carried on heads, bicycles, and two-wheelers by RaGa’s listeners; 2000 cots were stolen but we are sure the rich political party won’t lose its sleep over the string cots. The embarrassing headlines, however, may have left them red-faced. 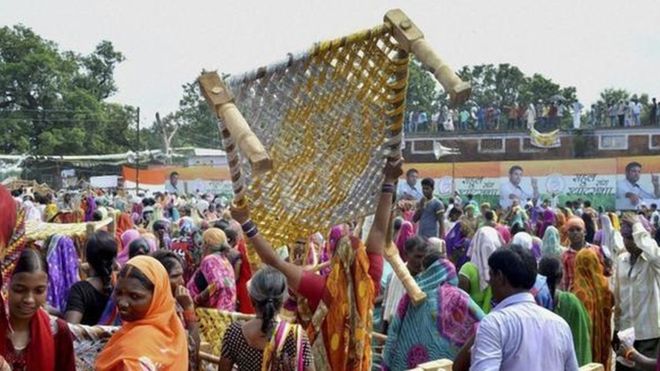 After calling a “No-confidence” motion on the ruling government in July 2018, Rahul Gandhi left the nation shocked by approaching the sitting PM’s seat in the parliament, commanding him to get up, and when refused, diving to give the PM a bear hug, right in the middle of heated debates in a tensed environment. Moments later, he was captured on camera, winking at a party member with an expression of mockery. The unprecedented gesture illustrated his immaturity and generated a barrage of memes online.

PM Narendra Modi had once called himself the “Chowkidar” of Bharat. Latching on to this claim, in a bid to humiliate the sitting PM, Rahul Gandhi weaved his entire 2019 election campaign on the disgraceful slogan of “Chowkidaar Chor Hai”. His election campaign was more like a smear campaign that backfired terribly. The jibe was deemed insulting towards the watchmen or security guards community, responding to which, the Prime Minister prefixed “Chowkidar” to his Twitter handle and millions of his followers followed.

Pulled up for lying in the name of Apex Court

“In the heat of campaigning,” Rahul Gandhi alleged foul play in the Rafale deal and attributed the “Chowkidar Chor Hai” narrative to the Supreme Court amidst the people of Bharat. In response, BJP MP Meenakshi Lekhi filed a criminal contempt plea against the Congress leader. On 8th May 2019, he was made to tender an unconditional apology in the apex court for misleadingly attributing to it the “chowkidar chor hai” remark in the Rafale verdict.

You may or may not approve of his politics, but can’t deny that his speeches, for whatever reasons, are always entertaining. His lies or his failures are amusing and an instant hit on the internet. For instance, this speech where he struggled to pronounce Sir M Vishweshwaraiah’s surname and ended up with a flawed pronunciation at last. His repeated futile attempts had Bharatiyas in splits for days.

Though Congress spokesperson Randeep Surjewala had tried to dismiss the meeting as figments of the imagination of “Bhakt channels”, the party had to come clean on this eventually. While Bharat and China were locked in the standoff arising from the Doklam border crisis, the INC Vice President met the Chinese ambassador. The ever-loyal Surjewala attempted to downplay the meeting as a “courtesy call”, but not many were inclined to buy this dubious narrative.

Belittling Dogs of the Forces

That he has little respect for the Bharatiya ethos is an established fact. But it came as a shocker when he managed to insult the army, yoga and even innocent but brave animals who have nothing to do with politics, on the International Yoga Day, 2019. Captioning the image of a photo of the Army dogs performing yoga with their handlers with a sarcastic, “New India”, he might have patted himself on the back, but outraged netizens immediately put him in his place.