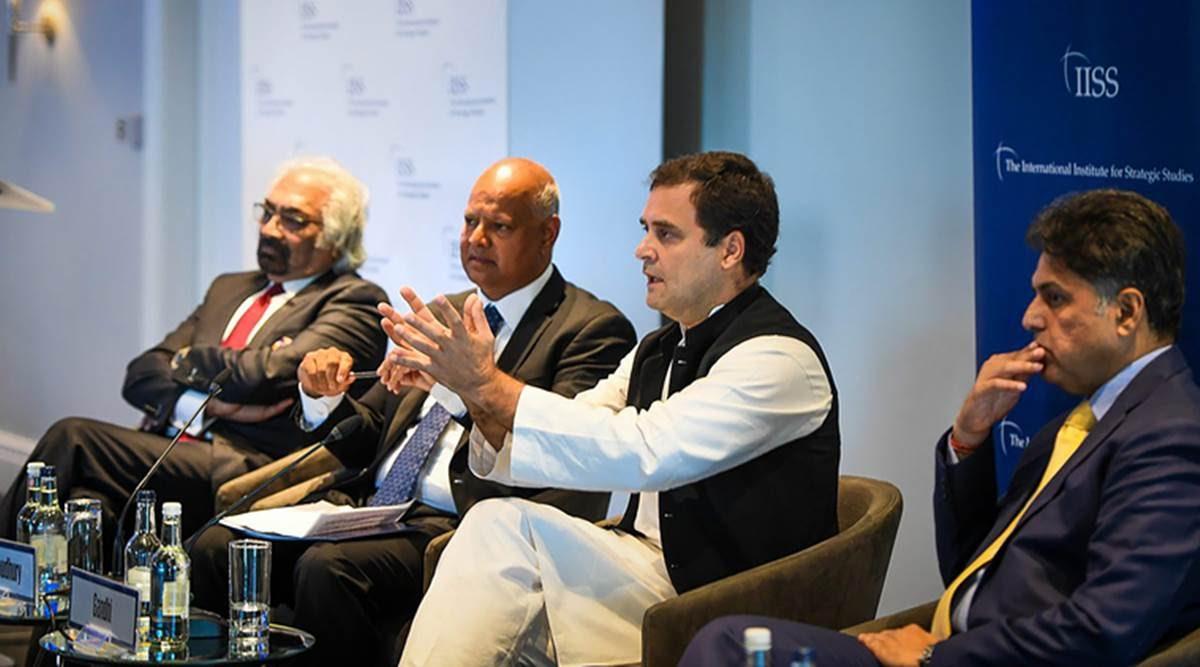 Congress president Rajiv Gandhi’s foreign jaunts have become a platform for anti Bharat rant defying logic & facts. After his thoughtless outbursts against the RSS, Sushma Swaraj & the Modi government, Rahul Gandhi came up with a startling & hurting announcement in London in front of UK parliamentarians.

Flanked by Sam Pitroda on his left & Manish Tiwari on the right, Rahul dropped a bombshell by saying that Congress was not responsible for the massacre of 3000 Sikhs in 1984. He was responding to a question from a correspondent, Mr. Suri of CNN-News18. This statement of Rahul Gandhi comes 13 years after the then Prime Minister Manmohan Singh publicly apologized to the Sikh community for the 1984 pogrom to assuage the feelings of the Sikh brethren.

Dr Manmohan Singh’s apology in 2005 inside the Parliament had acted as somewhat of a balm in healing the wounds of that ghastly massacre where thousands of innocent Sikhs were burnt alive by Congress henchmen, but Rahul Gandhi’s horrendous statement of absolving the Congress from the 1984 pogrom has sliced opened the wounds of that gory bloodbath after 35 years for the Sikh community.

Late Prime Minister Rajiv Gandhi’s ironic yet famous remarks in response to the dance of death by the Congress supporters in June 1984, that when a big tree falls the earth shakes still resonates in the memory of the nation & particularly the Sikh community which is still trying to come to terms with that slaughter on the streets of Delhi.

The Congress President could have sidestepped the question saying that he was too small to have any memory or influence over the gruesome tragedy, but to absolve the Congress party of any involvement in the 1984 open massacre of a particular community when your own Prime Minister had apologized for the dastardly crime is rubbing salt into the wounds of the victims, relatives & the survivors of that ghastly incident.

On such a sensitive matter, the Congress President could have been humane & honest but his outright rejection of the Congress party’s involvement in the ’84 pogrom is a complete somersault from the official stand of the party & its former PM who held office for ten years.

P Chidambaram was quick to come to Rahul’s defence, explaining that Rahul was just 13 or 14 years old when the pogrom happened & Dr. Manmohan Singh had already apologized for the pogrom. This line of defence could have been adopted by Rahul himself to steer clear of the controversy but he chose otherwise.

This statement comes amidst a long line of similarly irresponsible statements by the President of the country’s oldest party. The victims & survivors of the ’84 pogrom have been waiting for justice for the past more than 3 decades & questioning why key accused like Jagdish Tytler & Sajjan Kumar are still in the Congress party. Rahul’s diktat from a foreign land absolving the Congress & giving it a clean chit is a body blow to the pogrom victims.