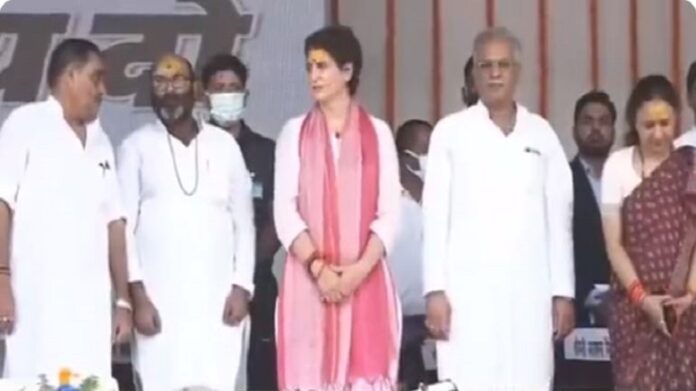 Priyanka Vadra is enjoying yet another build up in Lutyens’ media as the ‘promised one’ who will deliver the UP state elections scheduled next year for Congress – the party last won here in 1985.

The elder sister of Rahul Gandhi is being praised for getting ‘optics’ right this time around. The Lakhimpur Kheri incident is being exploited to the hilt by all Opposition parties, and Vadra too has made a beeline. He haranguing of police enroute to the incident spot, meeting with families of farmers killed and a rally organized for her in Varanasi are being praised by usual suspects for creating the ‘right buzz’.

The Varanasi rally was held on Sunday, and media reports excitedly describe how Vadra urged people to chant ‘Jai Mata Di’ and started her speech with a prayer to Maa Durga. One just has to listen to her stilted and desultory delivery to understand the PR machinery at work.

Incidentally, Chattisgarh CM Bhupesh Bhagel also tagged along despite a raging communal riot in his own state, where police did not even spare Hindu kids. Moreover, Baghel’s father regularly spews venom against Hindus, especially Brahmins, and is a supporter of the very same Kawardha MLA Mohammad Akbar who Hindus blame for the recent violence.

Obviously, Priyanka and her ‘janeu-dhari’ brother Rahul have maintained a stoic silence over the senior Baghel’s hate speech. But this was not the only mistake Priyanka’s handlers made in the otherwise carefully constructed Hindu facade of the rally in one of the holiest cities for Hindus.

The Congress think-tank decided that they should have someone recite Quranic verses in Arabic during the rally.

“The same Congress which is pretending to be a guardian of Hindu and Brahmin interests, that same Congress is having Muslim prayers read from its stage, what sort of protection will it give to Hindus? We heard that Priyanka ji’s speech was stopped for 10 minutes while the Muslim prayer was being read,” said one Hindu to a journalist.

“OK, as Muslim prayer was going on, the speech was stopped..,” says the journalist.

But another man interjects, shaking his head, “No, the speech wasn’t stopped as Azaan was going on. The prayers were read out from the stage. You (Priyanka) have come to Kashi, which is an important cultural city of the world. You got to the main temples: Kashi Vishwanath, Durga ji, Sankat Mochan, and then you have Muslim prayers recited from your stage? This is not acceptable. They invited someone specifically to read the Quranic verses – this is not acceptable.”

During Navratris, Hindus worship Maa Durga and her murtis are installed at different public spots so that Hindus can pray and do festivities. On the 10th day of the festival, the deity is taken for visarjan and immersed in a water body. All our temples have murti/vigraha of deities installed in them, which Hindus worship. Thus, murti puja is central to Hindu Dharma.

This same ‘murti puja’ is reviled as ‘idol worship’ in the Abrahamic religions – particularly Islam & Christianity. There are several verses in the Quran explicitly forbidding ‘idol worship’ and promising eternal hellfire for those who are mushrik (polytheist). Here are two samples:

Almost everyday, we see a temple being vandalized in Bharat, Pakistan, Bangladesh or even UK, US, Australia wherever a Muslim diaspora is to be found. Kashi itself has one of the biggest symbols of the iconoclastic nature of Islam in the form of the Gyanvapi mosque built by Aurangzeb after destroying the Vishweshwar temple in 1669.

And Congress comes to do a rally addressing Hindus of this holy town and decides to have Quranic verses read from the stage? What explains this urge to stuff secularism and intolerant religions down the throats of Hindus? Would Congress have Hindu prayers read while addressing Muslims in Wayanad, the constituency of Rahul Gandhi? Actually, in Kerala Rahul Gandhi rides roughshod over the same Hindu audience in North India that his sis is now trying to woo.

Can there be a bigger load of rubbish? How on earth can a religion be secular? A religion is meant to provide divine sustenance, a path for liberation, and a cultural framework which binds people – that’s what Hindu Dharma does. Hindus have walked hand in hand for millennia with adherents of other Dharmic panths like Jains, Sikhs, Buddhists, Sarna vanvasis etc. We believe in the concept of mutual respect, and respect the right of other indigenous people across the world, in Americas, Africa, Australia, Europe to practise their ancient ‘pagan’ religions.

But to lecture Hindus on moving hand in hand with exclusivist monotheist religions which demonize ‘idol worship’ as the greatest sin possible, takes an incredible ability for mental gymnastics. Hindus are not buying it anymore.