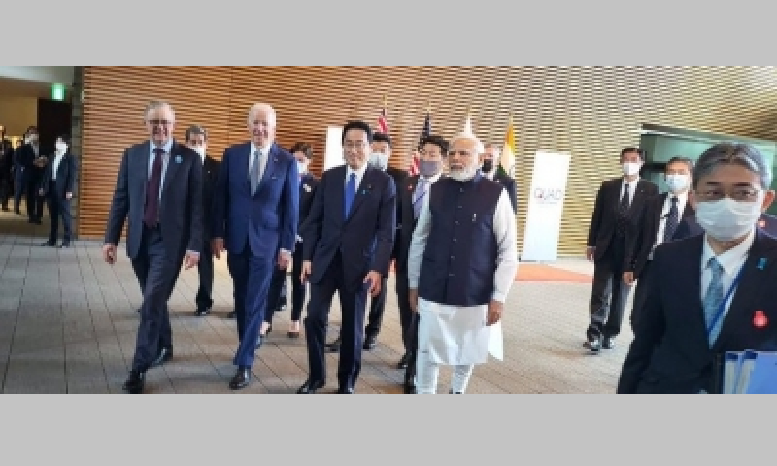 The Quadrilateral Security Alliance may have gone through phases of void and little activity since its inception in 2007, but it has come to acquire greater significance in recent times.

In the light of the latest developments on this front, the recently concluded Quad Summit reinforced the need for an alliance to secure maritime territories, particularly taking note of China’s growing dominance on the global stage.

China’s penchant for turning islands and atolls into military bases and declaring territorial ownership is the very reason Quad needs to be a revitalised entity.

As Quad offers “tangible benefits” to contain China, the US, Japan, Bharat, and Australia come together with an Indo-Pacific maritime surveillance plan, with 50 billion USD of investment in infrastructure over the next five years.

Despite the discussion not having explicitly mentioned China, the leaders strongly opposed “any coercive, provocative or unilateral actions that seek to change the status quo” in the Indo-Pacific region. This intent points out to acts of “militarisation of disputed features, the dangerous use of coast guard vessels and maritime militia, and efforts to disrupt other countries’ offshore resource exploitation activities”, all of which China is infamous for accomplishing.

Under the new maritime surveillance initiative, namely, Indo-Pacific Partnership for Maritime Domain Awareness (IPMDA), Quad will work with regional partners in response to humanitarian and natural disasters, and against illegal fishing.

IPMDA will be working “in consultation with Indo-Pacific nations and regional information fusion centres in the Indian Ocean, Southeast Asia, and the Pacific Islands by providing technology and training to support enhanced, shared maritime domain awareness to promote stability and prosperity” in seas and oceans. This is a significant upgrade from the previous level of engagement with joint military drills across maritime stretches in the region.

For an association rooted in international law and undeterred by coercive tactics, and as a step towards deepening cooperation on infrastructure, Quad’s resolve to extend additional help to island nations in the Pacific is a timely development, given that China has been increasingly marking its territory.

Certainly, to the Asian giant’s displeasure, China has previously called Quad an “Asian NATO”. All the member countries of Quad have had a face-off with China in recent times.

Bharat’s friction with China has a long-standing history with military encroachment in Ladakh’s Galwan valley in 2020 being the most recent concern of a very direct nature. Further, the compounded crisis in Sri Lanka is an invitation for China to mark its presence more prominently in the Indian Ocean Region.

The uninhabited Senkaku Islands in the East China Sea, located northeast of Taiwan, is administered by Japan. China calls this archipelago Diaoyu and claims it as its own. China imposed trade sanctions on Australia after it went expressive on probing the Wuhan lab leak theory as a possible origin of the coronavirus pandemic.

The announcement of this outcome of the Quad Summit has indeed sent China into a state of alarm, sensing that this is America’s plan to corner China with military and strategic allies. The Chinese Foreign Minister, Wang Yi has dubbed this association as “Indo-Pacific NATO”, and alleged it for “trumpeting the Cold War mentality” and “stoking geopolitical rivalry”.

Expectedly, China sees Quad as an instrument for “disrupting regional peace and stability”. Chinese Vice Foreign Minister Le Yucheng had earlier said that “closed and exclusive small circles or groups is as dangerous as the NATO strategy of eastward expansion in Europe. If allowed to go on unchecked, it would bring unimaginable consequences, and ultimately push the Asia-Pacific over the edge of an abyss”.

NATO (North Atlantic Treaty Organization), also called North Atlantic Alliance, is a military alliance of 30 member states that came into existence in the aftermath of the second World War as a counter to the Soviet Union.

NATO continues to exist as a system of collective security whereby its member states (28 of which are European) agree to defend each other against attacks by third parties. Even after the disintegration of the Soviet Union, NATO remained in operation in the Balkan states, the Middle East, South Asia, and Africa.

While the purpose of this trans-Atlantic agency stands justified to the extent that a member state will not be left in the lurch in the event of external aggression, the possibility of an entity of such nature, bound together and driven by mutual interest, is a necessary deterrent at a time like now when China’s predatory ways are making their mark along strategic territories.

It is pertinent to be mindful of the fact that the member countries of Quad are representatives of diverse cultures and interests and forging a common interest as solid, lasting ground is the prerequisite for elevating Quad to the status of NATO.

However, experts are of the view that Quad is no Asian NATO nor does it aspire to be one, as retaining its flexibility as an informal forum will augment its partnerships and expand its scope of cooperation, such as the launching of new Indo-Pacific Economic Framework (IPEF) by Biden in Tokyo.

IPEF has 13 founding members, including Australia, Brunei, Bharat, Indonesia, Japan, South Korea, Malaysia, New Zealand, the Philippines, Singapore, Thailand, and Vietnam. Its purpose is to “advance resilience, sustainability, inclusiveness, economic growth, fairness, and competitiveness for our economies. Through this initiative, we aim to contribute to cooperation, stability, prosperity, development, and peace within the region”, as said in a joint statement by the participating countries.

Whatever be the evolving features of this alliance, it is necessary for Quad to be founded on certain positive and constructive non-negotiable terms in order to sustain itself. Rising together as a force to counter China cannot be a very sustainable effort in the long run given diplomatic obligations and economic requirements of “enlightened self-interest”.