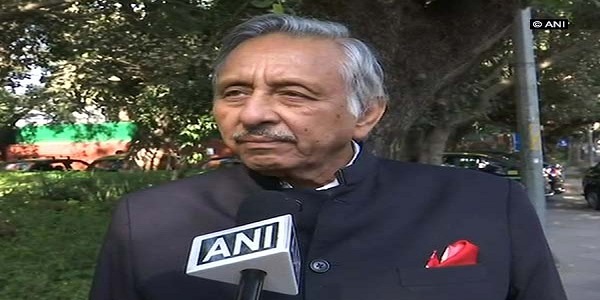 Ex-IFS officer, ex-RS MP and a leading ideologue of the Congress ecosystem Mani Shankar Aiyar is once again making headlines. In another controversial statement made at the Karachi Literature Festival on Sunday, Aiyar stated “I receive much more hatred in India than the love I receive in Pakistan”.

Thousands of people, whom I don’t know, hug me, wish me. I recieve much more hatred in India than the love I receive in Pakistan. So I am happy to be here. They are clapping for me because I speak of peace: Mani Shankar Aiyar in Pakistan (file pic) pic.twitter.com/VxjHzO7TV3

Aiyar said dialogue was the only way for India and Pakistan to resolve their tussle. He said he is “proud” that Islamabad has accepted this, but “half very sad” that New Delhi has not, Geo TV reported on Monday.

Aiyar’s latest statements regarding the need for “uninterrupted and uninterruptable” India-Pakistan dialogue have come at a time when Bharat’s security forces are reeling from fidayeen (suicide) attacks by Pakistani-sponsored terrorists in both Jammu and Srinagar in the last few days.

A twitter user also pointed out that Mani Shankar Aiyar was an “Indian” Foreign Service official from 1963 till 1989 with a Karachi posting from 1978 to 1982. Given his love for Pakistan, one may wonder whose side his loyalty was with during his service days.

In 2015, Mani Shanker Aiyer had requested for Pakistan’s help to ‘remove Modi‘ and bring Congress back to power, while speaking to a Pakistani TV channel.

Congress leaders in past too have been accused of harbouring pro-Pakistan sentiments. Aiyar’s “foot in mouth disease” just makes it difficult keeping it to himself. He has a history of exposing his party’s casteist and anti-national attitude (though unknowingly) through his outspoken language.

During the Gujarat Assembly Elections, he made the “neech aadmi” (low-born man) remark against Prime Minister Narendra Modi, exposing Congress to the charge of being elitist towards  OBC and Dalit (PM Modi belongs to the OBC Ghanchi caste). He also made a “chaiwallah” (tea-seller) jibe on the prime minister during the 2014 General Elections when he was the CM of Gujarat, again exposing the Congress’ elitism. Both the remarks cost Congress heavily during the elections.

Fearing similar lash back during upcoming elections, Congress was seen doing damage recovery on Tuesday. The party indicated that Aiyar might face “punishment” for his latest comments.

“Aiyar should stop giving such remarks. He has already been suspended. He should stay quiet. The Bharatiya Janata Party (BJP) can take advantage of this. I am writing to Rahul Gandhi ji asking him to expel Aiyar from the party,” senior Congress leader V Hanumantha Rao was quoted as saying by ANI.

Although Congress  did suspend Mani Shankar Aiyar from primary membership of the party on December 7 after his “neech admi” comment, it was seen more as a PR exercise as Aiyer continues to enjoy access to highest circles of Lutyens’ Delhi, Congress leadership and the Nehru-Gandhi dynasty.

Just a day before his ‘suspension’, Aiyer held a dinner meeting at his residence  – guests included Pakistan’s Ambassador, Pakistan’s ex-foreign minister Kasturi, ex-PM MMS, ex-VP Hamid Ansari and a host of others. The following day, Aiyar said the challenge involved in nation-building was related to integrating the Muslim community into the rest of the country. “Can we integrate them (Muslim)? Can we do it if there is a hostile relationship with Pakistan? We are damaging our own nationhood by enabling Pakistan to continue being considered as an enemy territory for no reason other than that it is inhabited and created by Muslims.”

The intellectual arrogance & visceral Hinduphobia of people like Mani Shankar Aiyer makes them blind to the simple fact that people in Bharat consider Pakistan as an enemy not because it is “inhabited and created by Muslims”, but because of the terror jihad that Pakistan has been continuously waging against Bharat for the last 30 years as part of its “death by 1000 cuts strategy.” Aiyer might choose to overlook the deep Islamist radicalization of Pakistani society since the Zia-ul-haq era, but the world is now waking up to Pakistan’s brutal persecution of its minuscule Hindu, Sikh, Christian, Shia and Ahmadi population. Bharat’s relations with other Muslim majority nations like Bangladesh, UAE, Malaysia etc expose the hollowness of Aiyer’s ‘logic’ that “Bharat hates Pakistan as it is inhabited by Muslims.”