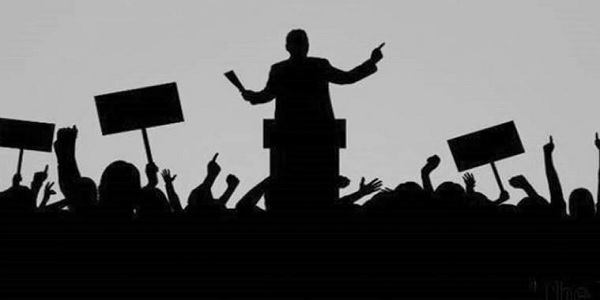 Populism is on the rise throughout the world. From Europe’s major countries to United States and from Latin America to Bharat, we can see an upsurge in populistic approach in politics. Populism is providing oxygen to major fires across Europe, changing dynamics in Asia and causing tectonic shifts in US and Latin America.

Emergence of five star movement and anti-immigration league parties in Italy; crowning of Donald Trump, Jair Bolsonaro, Turkey’s Erdogan and reign of Philippines’ Rodrigo Duterte are testimony of this change. Populism – unlike other major political ideologies – is not confined to either right or left wing groups, rather is embedded and practiced in both the political circles.

The Latin American nation Venezuela’s late President Chávez; the current Mexican president, Andrés Manuel López Obrador; and the Bolivian president, Evo Morales are all considered left-wing populist leaders. The Podemos party of Spain and Syrizan of Greece are some of the leading left wing populist parties of Europe. But despite the deluge of left wing populist parties and leaders, the most successful populists are on the right side of the political wings.

Marine Le Pen in France, Victor Orban in Hungary and Donald Trump in US are some of the ‘big dogs’ of right wing populism, who have gathered huge en mass following. Some analysts put PM Narendra Modi in the same league of right wing populists. Populism in Bharat, though, is a different ‘game of thrones’. The entire politics of Bharat, if framed in a vast canvas, can be termed as populist politics.

At the current juncture, populism is in its heydays across the globe. Which makes it immensely significant to grasp a proper understanding of what populism is.

Populism is a political programme or movement aimed at championing common people’s cause, representing hoi-polloi will, mediating or fighting with the two contrasts of the society and at dismantling elitism. In its most democratic form, populism functions to bolster common citizens cause and to defend underprivileged excluded anti-elitist class.

On the grounds of realism, populism is a political movement which separates the society into two distinct rival groups of ‘the pure people’ and ‘the corrupt elites’ or of ‘original people’ and the ‘immigrants’ and fuels the fire in between those separated groups. Populist across the globe pose themselves as leader of ‘the pure people’ or in some cases as the leader of ‘original people’ while grumbling against the others.

Political populism revolves around this charismatic leader who appeals to and claims to embody the will of the people. Observer minds throughout the world have identified the fundamental of populism to be “made of negatives”. The movement is framed and formed through the varying principles of anti-elitism, anti-establishmentarianism, nativism and anti-intellectualism. One of the strength of populism is its versatility and ability to adapt according to circumstances.

Populism can shape itself depending on the ‘enemy’ it chooses. And hence populist, as a political term, is often used pejoratively to criticise a politician for being opportunistic.

Bharatiya political populism can be aptly explained, in a sophisticated and simple manner, through the storyline words of Gulzar Natarajan:

Much as Mr Average-Voter would covet the cellphone or the television set, the prospect of a school building for his daughter or a road to transport his agriculture produce would appear more attractive. But unfortunately, our polity increasingly resembles Populismland and it remains a formidable challenge to formulate policies that emulate Prosperityland.”

Bharatiya populism is a mix dish of self-centred imprudent individualistic fancy promises, injudicious selfishness and unwary shortsightedness generously served by Santa clause politicians for allurement of votes. This tradition of taking the mix dish on occasion of every election is deep embedded in Bharatiya democratic culture.

From partition – which was caused as a result of Muslim nationalism and religious populism orchestrated by M.A. Jinnah – to Indira Gandhi’s ‘Gareebi Hatao’ slogan; from V.P. Singh dawned new populism under the veil of reservation, UPA formed ‘food security’ populism to Modi’s fear mongering nationalistic populism; Bharatiya populism has shown its many shades of adopting to situations.

History tells us about the established perception in Bharatiya political tradition – which is directed more at individual than interest groups – that providing individual benefits is the surest way to win over voters, especially the poor. This tradition has morphed a little into collective – whether religious or national – benefits being the new surest way to win over voters.

There are surfeit instances of those populistic measures in Bharatiya politics such as social welfare pensions, loan waivers, housing, Rs 2 rice, free power, farm loan waiver, promise of monetary distribution to farmers, extended reservations, pay rise etc. Looking at such populistic political measures, reminds me of the local practice of purchasing votes through allurement of liquor and cash, which I witnessed abundantly in my village. Political parties aim at formalising and institutionalising this same local practice.

This populism has been haunting the nation’s economy and growth story for decades now. Santa Claus gifting and other populistic practices has been clogging what could’ve been a smooth flow of development in the country. This populism of pandering to individual unwary demands ails from many fundamental problems.

Populistic practices are nothing different than a bunch of rats in a filled food godown. In an extremely diverse and heterogeneous society like ours, satisfying individual desires with scarce public resources is impossible. Government programmes which promise individual benefits generate substantial deadweight losses. Further, the scarce resources and huge demand ensure that we invariably spread the batter too thinly to benefit anybody.

Populism is deep rooted in Bharatiya politics and its extermination or elimination would be a byzantine task requiring membranes of comprehensive measures. To expect quashing of populism without such sophisticated approach would be facile.

Competitive populism, an open political market strategy established at alluring or approaching Bharatiya voters in a competing manner, can be the first step in the direction. Populism should be incentivised to benefit the common masses and eventually the nation as a whole in a prudent and pellucid manner.

The fulfilment of realistic and fundamental demands of poor must be the strategy of competitive populism. A deeper look into poor’s environment, unambiguously, tables the real requirements needed to be fulfilled. Improved critical infrastructure; developed human capital; enhanced education system; better living standards; agricultural facilities; proper fulfilment of fundamental requirements like water, housing etc. are the needs of the hour.

An optimistic populistic political ecosystem for addressing of these demands must be envisaged and crafted. Socialistic and communistic economic ideals, as essential parts of current populistic paradigm, should be replaced with capitalistic ones as for the collective betterment of Bharatiya society and political establishment.

As Gulzar Natarajan said “The aim should not be to blindly eliminate populism, but to channel it towards achieving socially and economically desirable objectives, while reconciling the interests of the political parties.” This, in his words, would be “the first step in journey to prosperity-land”.

All 68 seats in engineering college in Marathi medium taken up