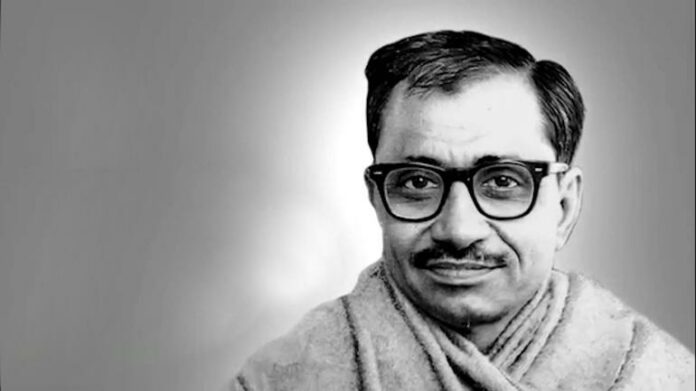 Pandit Deendayal Upadhyaya is one of the rare politicians and thinkers rooted in Bharatiya culture. He was one of the leading figures of Bharatiya Jan Sangh, the precursor of today’s Bharatiya Janata Party (BJP).

He was born on September 25, 1916, in Chandrabhan village located 26 kilometres away from the Mathura District headquarters. His father Shri Bhagwati Prasad was a famous astrologer who was an assistant station master at Jalesar and his mother Shrimati Rampyari was a pious and religious woman. He was brought up by his maternal uncle after Pandit Deendayal lost his parents at a young age.

Despite these personal tragedies, Deendayal excelled in academics. He stood first in his tenth Ajmer board and secured distinction in every subject for which he was awarded the gold medal. Maharaja Kalyan Singh of Sikar gave him a scholarship. He pursued his intermediate from Pilani where he again received the gold medal and Ghanshyam Das Birla gave him a scholarship.

He subsequently pursued his Bachelor’s Degree in English Literature from Kanpur’s Sanatan Dharm College and enrolled for post-graduation at Agra’s St. John’s College. Deendayal left his Master’s degree midway after his cousin Ramo Devi’s death left him despaired. He appeared for the civil services examination at his uncle’s insistence and was ridiculed for his attire (dhoti, kurta and cap) in the selection interview. He wasn’t interested in the administrative services and hence, enrolled in the BT course at Prayag.

He turned down both the administrative post and the offer of headmastership at a higher secondary school to serve society as an RSS pracharak. He joined the RSS (Rashtriya Swayamsevak Sangh) in 1937 influenced by his friend Balwant Mahashabde. He dedicated his entire life to the aim and mission of the organisation and to organise the society on the ideas and principles of RSS.

“I was at first thinking of taking up a job in some school and also attending to the Sangh work of the place simultaneously. But in Lucknow, I was able to study the current situation and form an idea of the vast field of work ahead, and I got the advice that instead of working in one particular town, I would have to work in a whole district. That is how the paucity of available workers in the dormant Hindu Samaj has to be made up”, wrote Pandit Deendayal.

At the time of the death of RSS founder Dr Hedgewar in 1940, the Muslim League had intensified its demand for a separate Muslim state. Deendayal opposed the partition demands and worked to combat Muslim fundamentalism and also to integrate Hindu society. From 1942 onward, he dedicated himself to full-time work in R.S.S., attended a forty-day summer vacation R.S.S. camp at Nagpur and hence, became a lifelong pracharak after successfully finishing two-year training in the R.S.S. education wing.

In 1945, he established Dharma Prakashan in Lucknow to spread the ideology of Hindutva nationalism. Rashtra Dharma was the first monthly magazine launched by him. The publication of the weekly Panchajanya began in 1948 and the daily Swadesh (now replaced by Tarun Bharat) was also published in 1949 from Lucknow. He wrote the books Samrat Chandragupta and Jagat Guru Sankaracharya in 1946 and 1947 respectively.

His tenets were drawn from the vast Bharatiya culture and enormous sources of ancient Bharatiya knowledge tradition. His deep understanding of both communism and capitalism led him to reject both philosophies based on his rational judgment. He proposed an alternative ideology of integral humanism based on the all-encompassing Bharatiya philosophy.

“The entire life of Pandit Deendayal Upadhyay Ji was based on the principle of ‘Sarvajan Hitay – Sarvajan Sukhay’. His philosophy of ‘Integral Humanism’ is capable of providing solutions to many problems of not only Bharat but the world”, PM Modi opined while paying tribute to him on his death anniversary in February this year.

Some quotes by Pandit Deendayal Upadhyaya

1) The nearest equivalent English term for Dharma can be ‘Innate Law’, though even that does not express the full meaning of Dharma. Since Dharma is supreme, our Ideal of the State has been Dharma Rajya.

2) We had taken pride in resisting things – British while they (Britishers) ruled us, but strangely enough, now that the Britishers have left, Westernisation has become synonymous with progress.

4) Independence can be meaningful only if it becomes the instrument for the expression of our culture.

5) The longings for Dharma, Artha, Kama and Moksha (the four kinds of human effort) are inborn in man and satisfaction of these in an integrated way is the essence of Bhartiya Culture.