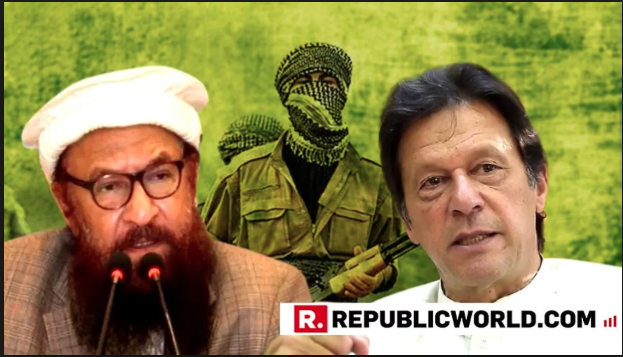 Makki, who also happens to be the brother-in-law of LeT chief Hafiz Saeed, is known for delivering anti-Bharat sermons and ‘virtues’ of jehad to radicalise youngsters. Open access of such a hate-mongering terrorist to universities will aid in radicalisation and recruitment of highly educated youths, thus enhancing the strike capabilities of state-sponsored Pakistani terror groups working against Bharat.

There are videos on social media which show Prof. Dr. Abdul Rahman Makki delivering speeches in University campuses, such as this one at Punjab University as part of a “Are You Ready To Serve Pakistan?” lecture series. Makki carries a reward of $2 million as part of the US ‘Reward for Justice’ program aimed at capture of terrorists, but this had no impact as can be seen from the ease with which he moves around in Pakistan, and has access to highest levels of the Pakistani state.

Makki is considered to be the conduit between Taliban and LeT and is also close to Al-Qaeda’s Ayman al-Zawahiri. Eight days before the 2010 German Bakery blast in Pune, Makki delivered a speech at Muzaffarabad (PoK) where he had said that three Indian cities, including Pune, were likely to be targeted.

In 2012, Imran Khan’s PTI party had openly backed both Hafiz Saeed and Abdul Rahman Makki after US had named them for their role in the 26/11 Mumbai attacks.

In 2017 when Pakistani government was forced to put Hafiz Saeed under house arrest to  fulfil its obligations under United Nations Security Council’s resolutions, Makki took charge of the JuD (Jamaat-ud-Dawa, a front group of LeT). In Sept last year, the Pakistan Supreme Court rejected the Government’s petition against Jamat-ud-Dawa (JuD) and its affiliated Falah-e-Insaniat Foundation (FIF), and allowed them to continue their ‘welfare activities’. JuD also contested last year’s general election in Pakistan under the banner of Allaha-u-Akbar Tehreek, a dormant political party co-opted by the group.

“The idea of allowing access to Makki to the technical institutes and other educational facilities is to catch them young. Pakistan Army’s terror proxies like the LeT and JeM will get a pool of educated students and engineers for inflicting more and more terror hits with an ever evolving sophistication,” the Daily Pioneer reported quoting a senior security official.

Counter-terrorism expert Dr Rituraj Mate said, “This is a dangerous trend emerging in Pakistan which has implications for not only India but also for countries like UAE where a lot of Pakistanis travel with work visas besides the US and the UK where they go for higher education. The radicalised professionals and students will continue with their mindset even while pursuing their vocations in the respective countries.”

However, promoting jihad through education has been a founding goal for Hafiz Saeed, right from the time he started LeT in 1987 along with his colleague in the Islamiyat faculty of University of Engineering & Technology (Lahore), Prof. Zafar Iqbal, and Palestinina Abdullah Yusuf Azzam (mentor & teacher of Osama Bin Laden). As this May 2008 research paper ‘Resurgent Radicalism in Pakistan: A Case Study of Jamaat-ud-Dawa’ by Wilson John, Senior Fellow, ORF says –

“What makes Saeed’s group more dangerous than other jihadi groups in Pakistan is not its strength or the ideology. It is the far-sighted and insidious methodology for capturing the minds of the young and the gullible through an elaborate network of schools and colleges: within the cocoon of modern subjects and outlook is ensconced the worm of its real intent – inculcating the spirit, the “virtues of jihad”.

The educational curriculum of these schools and colleges is guided by Hafiz Saeed’s philosophy, that to achieve jihad, his students must not only imbibe the great values of Islamic principles, but also be adept in science and technology. His colleague and co-founder, Prof Zafar Iqbal, said: “We will continue to work in the twin fields of education and jihad. Jihad is carried out to establish the system of Allah in the world. But this system cannot be established without education. Therefore, education is equally important.”

A sample reading from an issue (February 2007) of LeT’s children’s magazine, Nanhe Mujahid (child warrior) reveals that the group has given an entirely new dimension to children’s literature; it goes, “Jihad is unique tourism. In other types of tourism, one spends money. But in jihad, one earns a lot of money, female slaves and concubines in paradise, When a Muslim conquers the land of infidels, he becomes owner of their property. He becomes owner of their women…”

The terrorist training camps today are manufacturing a new 21st century brand of jihadis, for whom fighting the kafirs or infidels is just the battle, not the war. They see themselves as the warriors in a global war to establish the supremacy of Islam over the world.”

While this is how indoctrination is being carried out in premier Pakistani universities and schools, we in Bharat have allowed Marxists historians and secularists to distort education to make successive generations not just self-hating, with no clue of their own civilizational legacy, but completely blind to the existential threats facing us from the likes of the current Pakistani state.

This is why education is the CORE area that we have to reform and unshackle, as commentators like @realitycheckind have been saying for years now, and for which movements like HinduCharter.org are campaigning. This critical issue has been completely sidelined by our leading think thanks, policy makers, and ruling class – they are adept only at criticizing the political class, which is important, but they cannot absolve themselves of their failure to bring such important issues into the national discourse.