Our betrayal of Tibet will keep haunting us 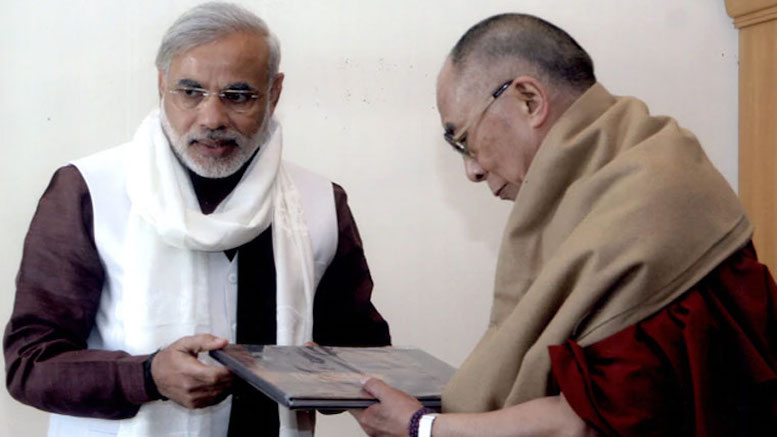 Belated realization that Bharat betrayed Tibet dawned on the eternal blunderer, J Nehru, in the last years of his life. Guilt of the 1962 humiliation roiled him. But like most egoistical leaders who never admit their mistakes, the story trotted out, and readily accepted, was that the Chinese had backstabbed him. Which, at best, is a true lie.

Tibet’s tragedy still arouses strong emotions. This was evident from a repeat viewing of Jean-Jacques Annaud’s moving 1997 film, Seven Years In Tibet. An Austrian mountaineer’s autobiographical account (based on the book of the same name) of how a chance association with the 14th Dalai Lama during his formative years between 1939-50 changed him completely has a deep resonance which only the universal dharmic values of Hindu Dharma, begetter of Buddhism, can induce.

Seventy years after the jackboots of the People’s Liberation Army (PLA) ravaged the Roof of the World, we still have our heads buried in sand. While Nehru surrendered Bharat’s strategic interests in Tibet to occupier China in 1954, it was the nationalist BJP which hammered the last nails in the coffin of our ties with Tibet, a spiritual connect spread over centuries. Lest it be forgotten it was the Atal Bihari Vajpayee regime which formally recognized Tibet as part of China in 2003.

The real body blow, however, was administered by Prime Minister Narendra Modi. All official contact with the Dalai Lama and Tibet’s government in exile at Dharamsala was discontinued in 2018. Reduced to a footnote from the past was the ravishment of Lhasa in 1950, and the Dalai Lama’s flight to Bharat nine years later. Even personal equations were brushed aside in the desire to cocker China. So much so that Modi ji did not even think it fit to wish the octogenarian seer on his birthday which falls on July 6.

Contrast this with the touching humility of the Dalai Lama who has never failed to reiterate his kinship with Bharat and how beholden he was to the benevolence and bigheartedness of its people. By opting to ignore a saint seen as the world’s foremost symbol of compassion and joy, the message sent out was that sincerity and sentiment no longer had a place in our dealings. Seen in retrospect it was an act of self-betrayal. Forfeited was the moral right of emerging the vishwa guru of an increasingly volatile universe.

Tibet continues to churn emotions largely due to the benign presence of the 14th Dalai Lama in our lives. But the pain of a people who have lost their past seems to be lost on our leaders. Most do not realize the backing the cause still enjoys the world over. Which is why the day the man born as Tenzing Gyatso breathes his last will be among the saddest. Because the Dalai Lama(s) of the future will never be the same.

In his moving book Tibet, Tibet, the author Patrick French vividly recalled the nearly two-month long hunger strike in early 1998 by Tibetan exiles at Delhi’s Jantar Mantar. Huge crowds turned up each day to back the demand for a UN mandated plebiscite just when a senior PLA commander was visiting the capital. Those who witnessed the spectacle shed tears of blood seeing the police beat up protestors blue and black even as they were dragged into ambulances. Many wept at the unusual demonstration devoid of anger, violence and fanaticism.

Among the protestors was Thubten Ngodup, a humble owner of a small food joint at McLeod Ganj. French instantly recognized him since he had met him 11 years ago. He said he was shocked to see Ngodup pour gasoline on his body and charge towards the protest site, body blazing and hands folded in namaste. He died in hospital the same day from third degree burns, but the image of the man who courted death with folded hands never left him. “There was something about its directness and logic,” wrote French, “that was hard to put from my mind. It was a very Buddhist death, a suicide bomber who turned his violence inward, killing only himself, protecting others.” Humility is the abiding legacy of the Dalai Lama. He had visited Ngodup in hospital and counselled him not to harbor any hatred for the Chinese.

When basic human decencies are squandered at the altar of business interests, providence has a way of getting back. And, sure enough, it happened this May when PLA soldiers parked themselves on our side of the Line of Actual Control (LAC) in eastern Ladakh. Weeks later there was a bloody scuffle in which we lost 20 soldiers. An apology of a retreat followed at Galwan after a series of powwows between army commanders, but the encroachers, as predicted, have refused to budge from Pangkong Tso and the plains of Depsang where the coup de main extended up to anything between 15-18 kms on our side of the perceived LAC. With the armies of both countries stacked along the entire border, a bloodier confrontation cannot be ruled out.

Six years of pampering the devious Xi Jinping on swing and seashore came unstuck because the relationship was anchored in self-interest rather than a mutual trust. To that extent Modi ji made the same mistake as J Nehru. He thought he could trust Xi but alas! the sentiment was not reciprocated. Business and BRI alone was on Xi’s mind. An experienced leader like Modi ji never realized that a transactional liaison between two countries with a troubled and inimical past can work so long the expectations of the stronger are met more than half-way. Our problem was never China’s communist makeover or its military cum economic muscle. Had either been the issue, there is no way Bharat could have struck up an affinity with the erstwhile Soviet Union since Independence. The bond never came under the slightest pressure despite the topsy-turvy of the Soviet break-up. Here too it is we who forgot our allegiance till kicked in the shin by the Chinese this June 15-16.

The elephant in the room has always been the unsettled border with Chinese occupied Tibet, and the absence of a policy. But this came to the fore only after the Chinese invasion graduated into a full-blown dispute after the Dalai Lama’s escape to Bharat in 1959. Political stability, however, has never been Tibet’s lot. Chinese and Nepali influence were contemporaneous ever since Songtsen Gampo coalesced the minor kingdoms and tribal entities to form the Tibetan empire in the 7th century CE. Conversion to Buddhism, which became the state religion, bought a modicum of Bharatiya sway.

Tibet’s status remained largely semi-autonomous till it became a Qing protectorate in 1720 which it largely remained till the British foray into Lhasa in 1903 by the celebrated British adventurer, Colonel Francis Younghusband. And he, much to the delight of Whitehall, discovered that Chinese influence in the Tibetan plateau was a piece of constitutional fiction. Which according to French born Tibetologist and historian, Claude Arpi, had been suspected all along. The discovery encouraged the British to convene the Shimla conference in 1914 with the government in Lhasa an equal partner in the trilateral talks which included Sir Henry McMohan and the Chinese representative. The British ensured that the agreement to grant Tibet full autonomy was initiated by China but signed by India and Tibet. The border between India and Tibet was fixed in the form of a thick red line called the McMohan Line on a double page map.

The Dalai Lama’s existence even in the last years of the Manchu dynasty was not wholly safe. In his book 1962, the McMohan Saga, Claude Arpi mentions how the Chinese troops of Zhao Erfeng, the warlord of Sichuan had entered Lhasa in 1910 and tried capturing the 13th Dalai Lama, compelling him to take temporary refuge in India. He returned two years later after the remaining Chinese soldiers were thrown out of Tibet. Independence of country was declared thereafter in 1913 with the full blessings of the British. The security of the border areas was always uppermost in the minds of the British administrators. Quite part from the possibility of an armed invasion by China or Russia, an anti-infiltration strategy was readied given the Chinese penchant for a slow takeover.

A detailed plan, writes Arpi, was accordingly put in place by the War Office with the help of seven squadrons of the Royal Air Force to militarily defend Tibetan autonomy, if necessary. Unfortunately, the thought of using the Air Force in the Himalyan region was clean forgotten by the J Nehru regime in 1962 when the actual need arose.

The Indian stance on Tibet till 1949 was to recognize Chinese suzerainty on the strict condition that its autonomy would never be tampered with. This changed almost overnight on 7 October 1950 when Tibet became an “occupied country” from a country “verging on Independence”. Behind the somersault was the pusillanimity of J Nehru who sacrificed the national interest to befriend China. The famous letter written by Sardar Patel to him exactly a month later was put on the backburner. Its words proved prophetic: “The Chinese Government has tried to delude us by professions of peaceful intention…They managed to instil into our Ambassador (K M Panikkar) a false sense of confidence in their so called desire to settle the Tibetan problem by peaceful means…The action of the Chinese, in my judgment, is little short of perfidy.” Five weeks later the sardar was dead, and the chances of stitching together a China policy lost.

The letter covered almost every aspect of relations with China. Reading it today gives an inkling of the great prime minister Patel would have made had Mohandas Gandhi not foisted J Nehru on the nation. Broached at length was the military and intelligence appraisal of the Chinese threat, both internal and external; examination of our military position and redeployment of forces wherever necessary; review of our military strength and long-term defence needs; the risks of canvassing for Chinese entry into the UN; political and administrative steps to strengthen our northern and north-eastern frontier; and improvement of communication links by road, rail, air, and wireless in border areas.

If only Modi ji had poured over Patel’s letter with a fine comb and pushed the envelope on a few points, the Chinese would not have dared to risk another adventure in Ladakh. Wooing Xi and building a statue of Patel could have waited. The least that could have been done is to revive the call for Tibetan autonomy given the geographical buffer the region was till the Chinese occupation. Looking the Chinese fair and square in the face would have served us well.

On the flyleaf of French’s book on Tibet is a wisely selected quote from Akira Kurosawa’s Something Like An Autobiography, the memoir of the iconic Japanese film director: “My brother said to me…if you shut your eyes to a frightening sight, you end up being frightened, if you look at everything straight on, there is nothing to be afraid of.”