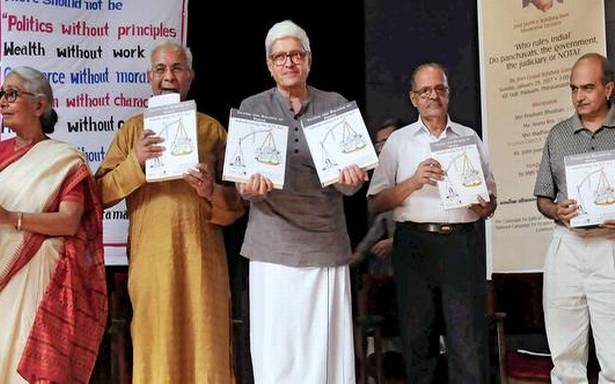 There are several inconsistencies in this article of Gopalkrishna Gandhi published in The Wire on 11.7.2017 titled- Modi was ill advised to visit Israel. Worse, to make it a love fest. .

He says Gandhiji wrote in Harijan on 26, November, 1938 “Palestine belongs to the Arabs in the same sense that England belongs to the English or France to the French. It is wrong and inhuman to impose the Jews on the Arabs.”

Going by the above logic and the yardstick Brits applied during partition of our country into India and Pakistan based on religious factor of Hindu and Muslim, India should have been a Hindu Rashtra then!!! He therefore contradicts his own words when he concludes his article by saying- “The history of principles is not our present government’s favourite subject of study. It is intent on re-writing history.“

He also says “The visit has announced a new ‘strategic partnership’. This is in a sense a formalising in name of what is a hard fact: India is the largest buyer of Israeli military equipment and Israel is, after Russia, the second largest defence supplier to India. But it is also more, much more. It is a second Balfour Declaration equivalent without the safeguards, to the effect that if Israel is a fact, so is its hegemony in the region, so is the Palestine occupation. “

Unfortunately in his above statement Gopalkrishna Gandhi misses the point that the modern day foreign policy or foreign relations do not go by the old concept- Your enemy is my enemy and therefore we both are friends. Modern thinking is in the lines of- your enemy is my friend but still we both can also be friends. In other words, in modern era there are no permanent friends or permanent enemies either, but only permanent interests.

“India had a clear stand on this (Palestine issue). Now that stand has been blown away. Apart from grave consequences endangering the safety of Indian residents in the Middle East and aggravating tensions in India, this amounts to a repudiation of the cardinal tenets of India’s foreign policy.

Any government may repudiate its predecessor’s policies. But Palestine has not been about policy as much as principle. The history of principles is not our present government’s favourite subject of study. It is intent on re-writing history. Fortunately, there are others who remember what happened and will not let it be forgotten.”

Let us not forget that Bharat’s soft approach so far has not yielded any tangible results. Rather it has only boomeranged and the terrorism perpetuated from cross borders has made serious inroads into our country jeopardizing the safety and security of the citizens living within Bharat. If one goes by the history of overseas sponsored terrorists’ attacks in Bharat one would realize that Bharat’s stand hitherto on Palestine has had no bearing on these terrorists attacks in Bharat, nor has it softened the terrorists’ approach towards Bharat.

The legacy of Gandhi-Nehru on Bharat’s foreign policy has out lived its purpose at a time when a country’s foreign relations are influenced by global factors that are dynamic, and therefore we can ill afford to have a static approach lest we would only remain as mute spectators wondering what is happening around the world. The global scenario has changed a lot and the foreign policy/ relations are influenced by geo political factors, trade and particularly by defence pacts.

To conclude, Gopalkrishna Gandhi is missing a vital point in his article which is that Bharat’s strengthening its ties with Israel need not necessarily mean diluting or compromising its stand on Palestine, because, to repeat, your enemy is my friend but we both can also be friends; or to paraphrase the same – we both are friends but your enemy can still be my friend.

Mr. Gopalkrishna Gandhi, Bharat may continue its love fest with Palestine, which you would probably like, but Bharat need not hate Israel to prove to the world that Bharat loves Palestine.