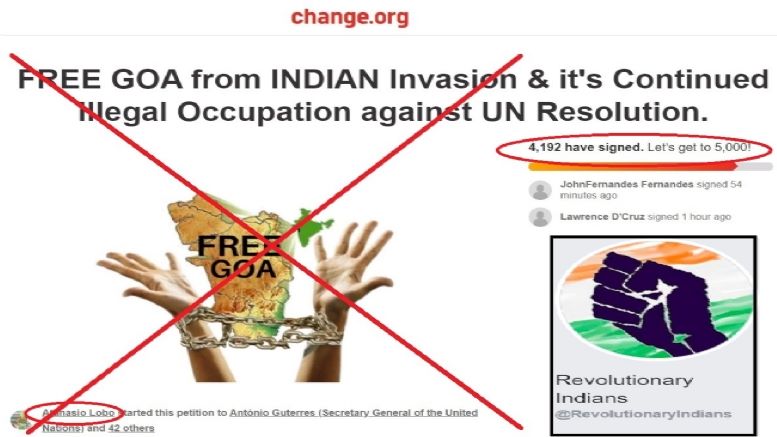 An online petition addressed to United Nations (UN) asking it to “free Goa from illegal occupation by India” has been deleted or taken down after vociferous protests. The petition titled ‘Free Goa from Indian invasion & its continued illegal occupation against UN resolution’ had been started by one Atanasia Lobo who calls himself ‘indigenous people of Goa living in exile in foreign countries’. The petition addressesd the UN Secretary General and 42 other world leaders and was signed by 4179 people.

The petition said that India ‘invaded’ Goa in 1961 and put an end to the Portuguese colonial rule ‘unilaterally and illegally’. Objecting to this seditious petition a group called ‘Revolutionary Indians’ has challenged the petition by filing a police complaint which has been taken cognisance of and a sedition case has been booked against Atanasia Lobo and the signatories of the petition.

‘Revolutionary Indians’ also debunked the lies propagated by the petition which stated that Bharat has illegally occupied Goa since 1961 and that unlike Bharat which came into existence only in 1947, Goa has been a separate nation since 1510. The complainant has objected to such baseless claims and pointed out that this is an attempt by Lobo and others to break the unity and integrity of Bharat and mar its image internationally.

In addition to the signatories, Revolutionary Indians have also demanded investigation again portals such as ‘Change.org’ for encouraging such seditious petitions. They have pointed out how often websites such as Change.org and others promote content which is anti-Bharat, causes religious disharmony, generates fear and insecurity among citizens and directly threatens both the unity as well as sovereignty of the nation. Indicating the irreparable damage such content is likely to cause to the nation’s integrity, the group has requested that such content be removed with immediate effect from the website and that appropriate steps be taken to prosecute and punish the petitioners and its signatories.

Although the current petition in question has now been deleted from Change.org, it seems the sentiment is not new – a 2017 petition titled ‘GOA FREE FROM INDIA..GOA AS A SEPERATE COUNTRY’ launched by one Joliton Dias can still be viewed on the site.

The history of Goan inquisition by Portugese colonials is so brutal that it beats the worst imagination. In his book titled ‘The Goa Inquisition’ Anant Priolkar has described the horrific tortures Hindus were subjected to by Portuguese Christian fanatics. It was through such bestiality that they were brought into the Christian fold and forced to stay in it. Village after village was converted from Hindu Dharma to Christianity using such methods. There was a court of inquisition which punished ‘heretics’ merely based on a complaint without any trial. If you thought this was the end of the brutality, then you are sadly mistaken because the court of inquisition had rights over both the living and dead. Therefore anyone could make an accusation against a dead person as well. The properties of the prosecuted were taken over by the court and a part of it was given to the witness.

Goa finds mention in the Hindu epic Mahabharata when it was referred as ‘Gomantak’ or ‘Gomanta’. It has been a Hindu land for time immemorial, being part of the Mauryan empire, and then ruled by several Hindu dynasties from 4th century CE to 1350 CE such as Abhiras, Bhojas, Chalukyas, Rashtrakutas, Kadambas, before control passed on to the Deccan Sultanates whom the Portuguese defeated in 1510. The torturous Portuguese rule was ended by the Indian Armed Forces on 19th December 1961 and a liberated Goa was fully integrated with Bharat.

The latest weapon picked up separatist elements and ‘break India’ forces is cutting off states from their Hindu roots and obscuring their history to show them as different from and independent of Bharat. The tussle between native Hindus and converted Christian fundamentalists which continues to this day in Goa is a manifestation of this separatist thinking which threatens the unity of the country.

Converted Christians are well aware of their Hindu roots, erstwhile Hindu surnames and to this day their family deity is the same as that of their Hindu ancestors. However, some of them harbour a sense of extraordinary loyalty and affinity towards their Portuguese colonisers and continue to peddle anti-Hindu and anti-Bharat statements as done by Goa’s ex-Congress MP Eduardo Faleiro and his daughter New York Times columnist Sonia Faleiro.