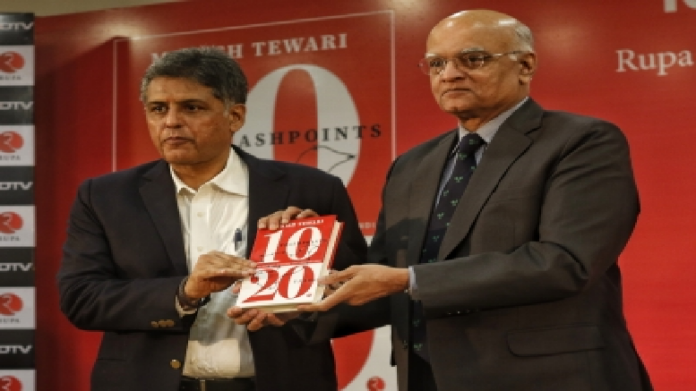 Congress MP Manish Tewari’s book “10 Flashpoints: 20 years – National Security Situations That Impacted India”, in which he stirred up a row by stating that the then UPA government should have acted in the wake of the 26/11 attacks, was released by former NSA Shiv Shankar Menon on Thursday.

During a panel discussion after the release, Tewari, seeking to play down his stand, said: “It is my personal opinion that kinetic action should have been taken, but I am not judging the action taken by the UPA government then.”

He also asserted that the UPA lost the perception battle as lack of action is considered as a weakness by Pakistan.

Tewari was also of the opinion that Operation Parakram at the time of the Atal Bihari Vajpayee-led NDA government was one such move where the government could not strike, despite all the logical efforts made and later, the Strike Corps commander was removed, which was also perceived as a weakness by Pakistan.

He said that though Balakot was first owned by the political leadership, it did not yield the desired result as Pakistan has gone back in its sinister plotting against India.

Tewari had questioned the UPA-1 government’s inaction after the Mumbai attacks.

“For a state that has no compunctions in brutally slaughtering hundreds of innocent people, restraint is not a sign of strength; it is perceived as a symbol of weakness. There comes a time when actions must speak louder than words. 26/11 was one such time when it just should have been done. It, therefore, is my considered opinion that India should have actioned a kinetic response in the days following India’s 9/11,” he said in the book.