Why is no one talking about Lalu’s anti-Jain hate speech directed at Amit Shah? 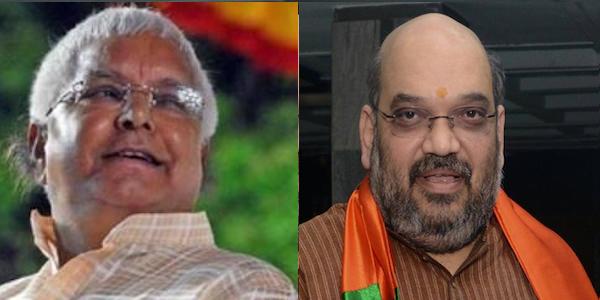 Jains are a minority in Bharat constituting just 0.4% of the entire population. So when a senior politician like Lalu Prasad Yadav spews hate speech targeting Jains while abusing a Jain politician, BJP President Amit Shah, you would expect media and intelligentsia to condemn it in no uncertain terms. But Lalu’s vitriolic comments have gone virtually unnoticed.

HinduPost had earlier reported how RJD President Lalu Yadav abused both PM Modi and BJP President Amit Shah at an election rally in the Congress stronghold of Rae Barelli. There were some other media reports too on this speech, but what has gone unnoticed is what Lalu says at 1 minute 35 second in the video below

Jains are the most peace-loving and industrious members of Bharatiya society. Hindu Dharma and Jain Dharma exist as two separate belief systems, but for the most part the two communities live in a spirit of mutual respect. If anyone truly represents the idea of ahimsa or non-violence in the world today, it is Jains whose saints even keep their mouth covered so that they do no swallow any tiny living creature by mistake while talking.

Lalu has not attacked any one person from Jain history for a specific case of intolerance or violence, but has painted the entire Jain community as violent and anti-Hindu. If this is the mindset of a senior ‘secular’ politician, then one really has to worry for the future of the country.

Can we imagine the outrage if a Hindu politician had made a similar comment painting all Muslims and Christians as evil?

Why is it that our left-liberals jump vigorously to defend the rights of Muslims & Christians, but are strangely muted when other minorities like Jains, Sikhs, Buddhists, tribal religions are attacked? What is this strange magic by which Jains, Sikhs, Buddhists & other Indic faiths get painted as ‘majority’ when their rights are violated by Abrahamics or ‘seculars’, but at other times they are encouraged to think of themselves as victims of Hindu majoritarianism?