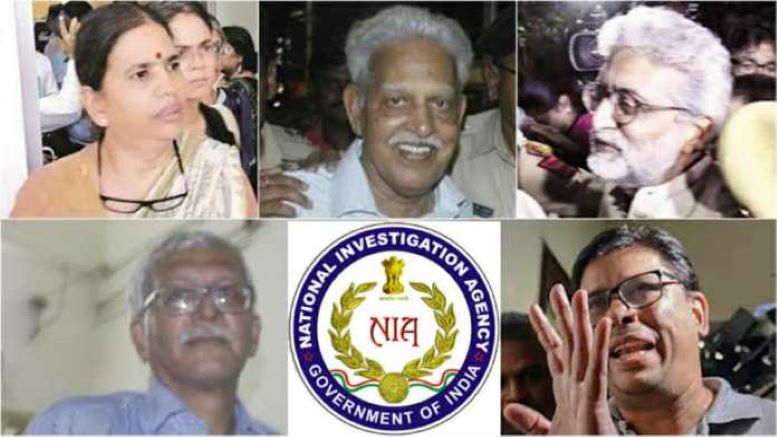 NIA (National Investigation Agency) has submitted a 15-page document comprising a list of 17 draft charges to a special court. In the said document, NIA claims that students from Jawaharlal Nehru University (JNU) and Tata Institute of Social Sciences (TISS) were recruited for terrorist activities by urban Naxals involved in the Bhima Koregaon Elgar Parishad and subsequent riots.

A report by the Economic Times quotes the NIA draft charge sheet as saying “all the arrested Urban Naxals are members of the banned terrorist organization CPI(Maoist) whose main objective is to establish ‘Janata Sarkar’ i.e.people’s government via revolution supported by a commitment to protracted armed struggle to undermine and to seize power from the state.”

The NIA draft also states that members of the banned terror group CPI (Maoist) and its frontal organizations have been enlisting students from different universities so as to further their conspiracy to wage a war against the nation. It further notes that the accused organized training camps in various regions to recruit cadres at all levels for the commission of terrorist activities of the CPI (Maoist).

So-called activists and supposed human rights lawyers Sudha Bharadwaj, Vernon Gonsalves, Varavara Rao, Hany Babu, Anand Teltumbde, Shoma Sen, Gautam Navlakha, late Stan Swamy, and others are among the 15 accused against whom charges have been levied by the NIA on 17 counts. The NIA charge sheet also seeks to charge the accused under relevant sections of the stringent Unlawful Activities (Prevention) Act (UAPA) and the Indian Penal Code (IPC).

NIA has also leveled allegations of soliciting and collecting funds for terror activities against the accused. OpIndia quotes the charge sheet in this regard and states:

They were involved in organizing, collecting, and participating in providing funds through the banned CPI (Maoist) in order to cover the expenses of rebellious activities, and coordinated the Bhima Koregaon program, held in Pune, with underground Naxalites.

They exploited the communal sentiments of Dalit and other minority forces and individuals across the state and provoked them in the name of castes in order to create instability and chaos in Maharashtra, the draft added.

Even though the draft charge sheet stated about a conspiracy to acquire weapons so as to cause the death of a public functionary, it didn’t explicitly mention the plot to assassinate PM Modi. The draft charges were submitted by the NIA earlier this month but made available on 23 August.

The Elgar Parishad was a Maoist event organized on 31 December 2017 in which several of the accused are said to have incited casteist mobs leading to large scale violence on 1 January 2018. The case was initially handled by the Pune police who recovered incriminating documents and letters from the devices of the accused and also discovered their links with the banned Maoist group. Subsequently, the case was transferred to the NIA in January 2020.