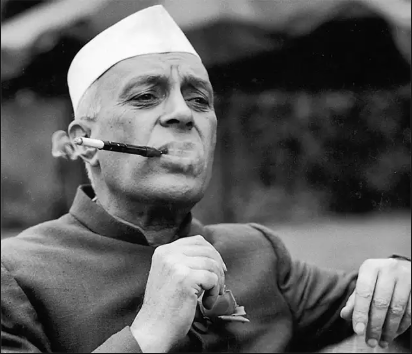 The fossilised Nehruvian ‘Idea of India’ which held sway in post-independence Bharat for over 70 years, is finally showing signs of changing to reflect our millenia-old civilizational ethos.

President Ram Nath Kovind became the first President after Rajendra Prasad to visit the Kumbh mela – the world’s biggest congregation of pilgrims and spiritual seekers. This world-renowned iconic gathering, inscribed on UNESCO’s Representative List of Intangible Cultural Heritage of Humanity, is held every 3 years in Prayagraj, Haridwar, Nashik and Ujjain on a rotating basis.

But acknowledgement of the mela, especially at the highest levels of the Central Government, has been missing – especially during the 50 years that the Nehru-Gandhi clan has ruled the country. President Rajendra Prasad, who became the first President of the country despite PM Nehru’s attempts to sabotage his candidature, was the first & only President to attend the Kumbh until this year when President Ram Nath Kovind attended the pilgrimage in Prayagaraj along with his wife.

“This is the first visit by a president to the Kumbh since the visit of then president Rajendra Prasad in 1953,” Rashtrapati Bhavan’s Twitter account posted later.

President Kovind visits Sangam in Prayagraj. This is the first visit by a President to the Kumbh Mela since the visit of President Rajendra Prasad in 1953. pic.twitter.com/JVQPpd2T0a

The Kumbh is an important part of India’s spiritual and cultural heritage, it quoted Mr Kovind as saying.

Jawaharlal Nehru was appointed as the Congress President in 1946, and thereby the first Prime Minister of Bharat, at the insistence of Gandhi, despite  12 out of 15 Pradesh Congress Committees, the only legal bodies having power to nominate and elect President of the Party, nominating Sardar Vallabhbhai Patel. Dr. Rajendra Prasad later lamented that Gandhiji “had once again sacrificed his trusted lieutenant for the sake of the ‘glamorous Nehru’ and further feared that “Nehru would follow the British ways.”

And Dr. Prasad’s fears indeed came true when Nehru himself told the economist J.K. Galbraith, “I am the last Englishman to rule in India.” Incidentally, Nehru was great friends with Galbraith, a man who believed ‘it was India’s good fortune to be a British colony.’

Nehru also vehemently opposed the restoration of the Somnath temple which was razed to the ground several times by Islamic invaders like Mahmud Ghazni. Sardar Vallabhbhai Patel, the then Union Home Minister, had pledged that Somnath will be reconstructed and restored to its original glory. Even Gandhi endorsed the plan, but after the demise of Patel, the task of the restoration of the temple was led by K M Munshi, a cabinet minister in Nehru’s government.

Nehru never liked the idea of restoring the ancient Hindu monument, and more than once criticised Munshi for working for its reconstruction. He labeled it as an act of ‘Hindu revivalism’. He also admonished Rajendra Prasad against inaugurating the temple, but Prasad ignored him and on 11 May 1951, while presiding over the opening ceremony of the temple, gave a stirring speech for civilizational renewal.

Nehru demonstrated his contempt for Hindu sadhus and Hindu sensibilities in 1948 when he, along with his sister Vijayalakshmi Pandit, slapped a sadhu (monk) peacefully sitting on indefinite fast outside his Delhi residence to protest against cow slaughter.

Jawaharlal Nehru ruled the country for 17 long years – his daughter Indira ruled for 15 years and completely handed over the education policy-making to Marxists. So it is no wonder that the self-alienating Nehruvian consensus has ruled the roost in the country ever since – but things are finally changing, although a lot still needs to be done.

Symbolism is important in any country, and is usually the precursor to a deeper change in the areas that matter – education, law & policy. The sight of Bharat’s President attending a world-famous Hindu gathering like Kumbh mela, hitherto ignored by Constitutional high-post holders, is a welcome change which heralds a civilization regaining its confidence after centuries of persecution & apathy.