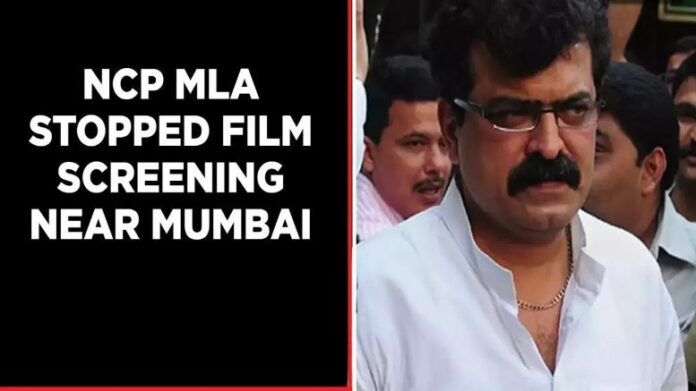 NCP MLA Jitendra Awhad led a group of hooligans to forcibly stop the screening of the Marathi movie Har Har Mahadev. They even manhandled moviegoers. The incident occurred at Thane’s Viviana Mall on Monday (November 7) night. The NCP accused the makers of the movie of distorting history.

The video doing the rounds on social media shows moviegoers being physically assaulted. Awhad and other NCP hooligans thrashed one of the viewers who opposed their hooliganism. The NCP hooligans ganged up against the man and brutally thrashed him. The security is also seen to be helpless and mute spectators.

According to available information, around 100 NCP goons gathered led by Awhad at the mall to oppose the movie. “The movie has claimed to show historic events that never happened in reality. Why should such a movie be shown?”, ANI quoted Awhad as saying.

As per reports, a case has been filed against the accused under IPC sections 141,143,146,149,323,504 and section 37/135 of the Mumbai Police Act for forcibly shutting the show of the movie and assaulting the audience.

BJP leaders have condemned the NCP hooliganism. “Maharashtra NCP leader and former minister enter a mall with his supporters, forcibly closes the shops there. His supports beat up those who went to watch the movie. Who gave you the permission to take the law in your hand?”, questioned Ram Kadam.

“There is no Uddhav government in the state now who stays silent. Whoever will take the law into their hands, strict actions will be taken on them… If they have objections over the movie, they are other ways for it in democracy… All of this to come into the limelight?”, the BJP leaders said.

“Because, in that ‘Har Har Mahadev’ movie, they have shown the assassination of Afzal Khan by Chhatrapati Shivaji Maharaj. This NCP and especially Jitendra Awhad never want the real history which is the nationalist history. That’s why, Jitendra Awhad being an ex-minister, went there, and took law into his own hands”, Republic World quotes BJP MLA Atul Bhatkhalkar.

The makers of the movie issued a statement condemning the attack on moviegoers while adding that the film doesn’t disrespect Chhatrapati Shivaji Maharaj in any manner.

“We have made our film Har Har Mahadev with utmost devotion & reverence to Chatrapati Shivaji Maharaj. It does not disrespect Maharaj or his brave warriors who fought for Swarajya. We have referred to historical facts while making the film & have submitted them to the appropriate authorities. There is no intention or attempt to distort anyone’s image or our glorious history. We are confident the people who would watch the film would resonate with the reverence we have shown to our Chhatrapati Shivaji Maharaj. We condemn the act of attacking filmgoers & trust the law & order system. – Zee Studios and Shree Ganesh Marketing and films (sic).”

While speaking to the media Awhad said, “Chhatrapati Shivaji Maharaj was 4 to 4.5 feet while Akshay Kumar is 6-6.15 feet. Is there any connection”? One wonders where Awhad gathers his information because he appears to be misinformed.

A Quora user pointed out that Maharaj’s height was around 5.7 feet, a fact that has been seconded by several sources. However, the achievements of Chhatrapati Shivaji Maharaj made him stand much taller than his physical height. It is probably too much to expect from the likes of NCP to know and interpret history correctly because they are known to distort history to suit their political agenda.

This is not the first time Awhad has done goondagiri. Earlier, he had civil engineer Anant Karmuse abducted and assaulted at his Thane bungalow. Thane resident Anant Karmuse was abducted on the night of April 5, 2020, by policemen who then took him to Awhad’s bungalow for supposedly putting up a post against the then-minister. Karmuse’s complaint states that on reaching the bungalow, he was badly beaten up by 15 to 20 goons in the presence of Awhad.