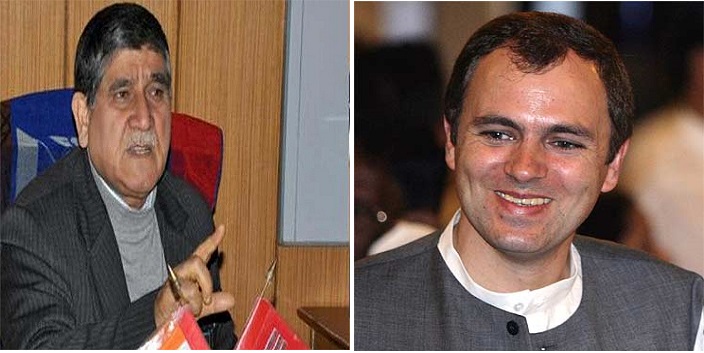 As per this report in New Indian Express –

“After the Assembly met in the morning, Speaker Kavinder Gupta, who is BJP MLA, alleged the presence of Rohingya Muslim refugees near army camp in Sunjwan area of Jammu, led to fidayeen attack on the army camp.

He said the Rohingya Muslims presence in the area poses security threat and there is possibility of their involvement in the attack.

Amidst his statement, BJP members chanted anti-Pakistan slogans to lodge their protest against the fidayeen attack on army camp.

Lone, who is NC MLA from Sonawari and former Speaker, stood from his chair and chanted pro-Pakistan slogans to counter BJP MLAs, who were shouting anti-Pakistan slogans.

“I am a Muslim first. My sentiments were hurt when they (BJP MLAs) were shouting anti-Pakistan slogans. I raised pro-Pakistan slogans to counter them and put my point of view on Speaker’s remarks. The Roghinya Muslims are refugees,” Lone told reporters outside the Assembly.

Speaker, however, defended his statement, saying he lives in the constituency where Rohingya Musims are  living. “The government also accepted that they are security threat after receiving complaints from the people. We have to take serious note of Rohingya presence in Jammu”.

Yes, I said it. It is my personal view, I said it in the house and I don't think anyone should have a problem with it: National Conference MLA Akbar Lone on shouting 'Pakistan Zindabad' in J&K Assembly pic.twitter.com/JbiwNui0kj

Pro-Pakistan sentiment within a National Conference leader is not new.  NC (National Conference) leader Dr. Sheikh Mustafa Kamal, younger brother of Farooq Abdullah, after the Uri terror attack in 2016, had endorsed the Pakistani position that Bharat staged a false-flag operation in Uri. He had said “There is a vast network of Indian security agencies in Kashmir and we can’t deny this fact that Uri attack may be a conspiracy to foil Pakistan’s attempts to raise Kashmir issue at United Nations.” He later said “India has violated Pakistan’s sovereignty with surgical strike.”

Predictably, NC has distanced itself from this latest statement by Akbar Lone, terming it his ‘personal view’ and stopping short of taking  any actual action against him.

This is the ugly reality of the present Kashmir-valley based Muslim political leadership, whether NC or PDP.  It is ironic that some consider PDP to be soft-separatist while NC is termed more unionist! Reality is that both of these parties (which actually represent two Sunni Muslim dynasties) are as anti-Bharat as one can be. CM Mehbooba Mufti has molly-coddled stone pelters, filed an FIR against an Army Major for opening fire against an unruly mob on the verge of lynching a soldier, denied minority rights to Hindus & Buddhists of J&K – while NC leaders have time & again toed the Pakistani line on Kashmir.

Shocking. Is this the official view of @OmarAbdullah’s party? Does he personally endorse this view? What about Sr Abdullah? We all know the answer, but asking in public interest.

Also if they don’t, then will Omar take any action against this fellow? https://t.co/39HI7gE0tj

The first order of business for nationalists should be to ensure that Jammu & Ladakh regions do not go down the same path as Kashmir valley – rampant demographic shift through settlement of Rohingya illegals and others, and the step-motherly treatment meted out to Indics in J&K must be dealt with a firm hand. Any MLA or leader who espouses a pro-Pakistan position should be dismissed and tried for treason.a