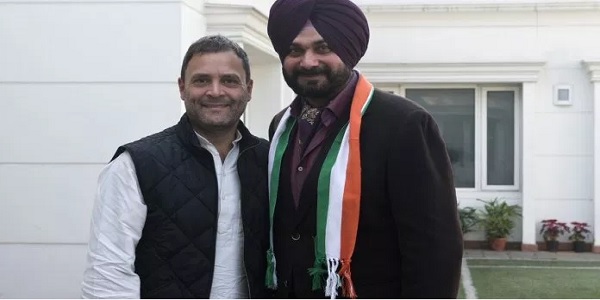 Adversity seems to have brought erstwhile foes of the Congress regime together.

In a queer turn of events former Congress minister Navjot Singh Sidhu, now undergoing imprisonment in Patiala jail, has come out in support of a beleaguered former minister Bharat Bhushan Ashu who was arrested a few days ago in a multi-crore rupee transportation scandal.

At one point in time, Sidhu as local bodies minister in the Captain Amarinder Singh government had taken cudgels against his colleague, the civil supplies minister Bharat Bhushan Ashu as he was allegedly involved in raising illegal residential colonies in Ludhiana. Captain under pressure from Ashu shifted Sidhu out of the local bodies department. Following this, Sidhu’s political life became dormant for over two years.

While the Vigilance Bureau readies a challan against Ashu in the Punjab civil supplies department’s transportation scandal, he is in the dock over his involvement in Ludhiana’s residential flats project, ‘Grand Manor Homes’ CLU (Change of Land Use) scam.

A report submitted by the then DSP Balwinder Singh Sekhon (since dismissed), posted with the municipal corporation, in this regard indicted Ashu and some officers for being hand-in-glove with the builder of flats. Ashu was accused by the DSP of issuing him threats (recorded on the mobile phone) in case he filed an adverse report in connection with the Grand Manor Homes project. However, in 2019, the DSP sent the case file having a detailed inquiry report to Navjot Singh Sidhu, who was the then minister for local bodies.

The inquiry had established that the municipal corporation granted CLU to Grand Manor Homes which was built on agricultural land, based on forged signatures of the people concerned. At that time Sidhu declared in Vidhan Sabha, “mantri ho ja santri, sab ko thokunga”.

In 2021, DSP Sekhon moved the court of Chief Judicial Magistrate, Sumit Makkar seeking directions for the police to register a criminal case against Ashu and to summon Sidhu as a witness against his former colleague. DSP Sekhon wanted to prove the reson behind Ashu’s threats to him and that was nothing else but the case file carrying the inquiry report which was sent to Sidhu.

Sidhu is now shirking to depose in court against Ashu. He took the plea that the said file had gone missing from the official records of the local bodies department and it had not been reconstructed. Hence, the summons issued by the court to him to appear in person did not hold well.

DSP Sekhon insisted that it is necessary to record Sidhu’s statement to reach the truth. Once the inquiry report had reached Sidhu, the former civil supplies minister Ashu started threatening him on the phone after which he was dismissed from service on flimsy grounds.

In an interesting turn of events, the ‘smart’ DSP produced a photocopy of the “missing” case file before the court laying bare the role of Ashu and his crony officers in the CLU scam. It is another matter that after the change of government, even the new incumbents in the local bodies department failed to get an FIR registered about the file going missing from official records.

Sidhu moved two applications earlier, refusing to appear in court but the judge dismissed them. It is for the third time that Sidhu on August 25th, moved another application objecting to his summoning. He is, besides other things citing security reasons which do not allow him to appear before the court. The court is yet to decide on his last application.

Surprisingly, Sidhu through his counsel went on to ask the court to take strict action against the whistleblower DSP as he has a photocopy of an official file violating the service conduct rules.

Going by the stance adopted by Sidhu in the court in a case that puts Ashu in the dock, it is clear that he is now siding with the accused. Otherwise, all this while Sidhu has been propagating probity in public life but his conduct in this particular case does not go down well with what he has been preaching.