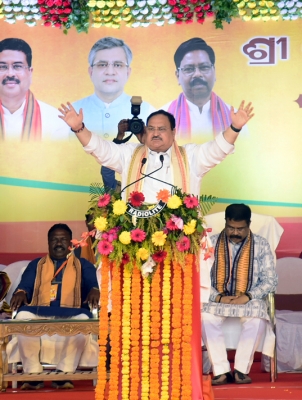 BJP National President J.P. Nadda has slammed the Naveen Patnaik-led government by raking up several issues, including non-implementation of the Ayushman Bharat scheme in Odisha.

While addressing public meetings at Tumudibandha in Kandhamal district and Banapur in Khurda district on Wednesday, Nadda said, “Naveen Ji, who always claimed that his government is working for the interest of the people of Odisha, has become an obstacle in providing the direct benefit of Ayushman Bharat Yojana to 60 lakh poor people of Odisha.”

A large number of people from Odisha were migrating to other states for livelihood. So only the Modi government’s Ayushman Bharat Yojana can protect them in case of health problems, not the Odisha government, he added.

“I want to ask Naveen Patnaik ji, what is the fault of the people of Odisha? Why are you not allowing benefits of the Ayushman Bharat Yojana?” he asked.

He alleged that the Biju Janata Dal government had failed to protect the valuable gems and assets of Mahaprabhu Jagannath ji. “Is Naveen Patnaik Babu running an original government or a duplicate government? What kind of government is it? Who is running the government in Odisha? We have failed to understand,” the BJP President said.

The BJP leader added: “Naveen Babu had promised to open Odia University in four years. The fifth year of his term has started but till today there is no movement in the opening of Odia University.”

Nadda also said the Modi government had established the Indian Institute of Science and Educational Research (IISER) in Berhampur, a skill development institute, several medical colleges and IIM in Sambalpur. On the other hand, the Naveen Patnaik government had failed to establish the Odia University, he added.

The BJP President said Naveen Patnaik ji had also promised to start the sugar mill. But till today not a single employee had got a salary nor farmers have been paid their pending dues, he added.

Citing the National Crime Records Bureau (NCRB) report, Nadda said the cases of crime and atrocities against women have doubled in the state. Odisha is also leading in the trafficking of women and youth. Women are not at all safe in Odisha, he alleged.

“Atrocities against Dalits and tribals are at their peak. Odisha Police is even more under attack by criminals. Such a government has no moral right to remain in power,” Nadda said.

Highlighting several developmental projects and schemes of the Modi government for Odisha, Nadda added that with an expenditure of more than Rs 220 crore, a seismic survey campaign had started on the Mahanadi basin in the state for oil and gas exploration. In Odisha, 87 Eklavya model residential schools had been set up, which are the highest in the country, he said.

For the Jal Jeevan Mission projects, the Centre had allocated Rs 3,323 crore to Odisha. The Narendra Modi government was spending more than Rs 8000 crore on the coastal highway connecting Puri, Nadda added.

Mentioning the appointment of President Droupadi Murmu, the BJP leader said, “For the first time in the country, a tribal woman who comes from a very humble background had been elevated to the highest constitutional position. And it is a matter of great honour and pride that she hails from the holy land of Odisha.”

He appealed to the people of Odisha to vote for the BJP and ensure that lotus blooms in the state in Lok Sabha as well as state Assembly elections. It is time that the people of Odisha also join the development Yatra under the leadership of Prime Minister Modi, he added.