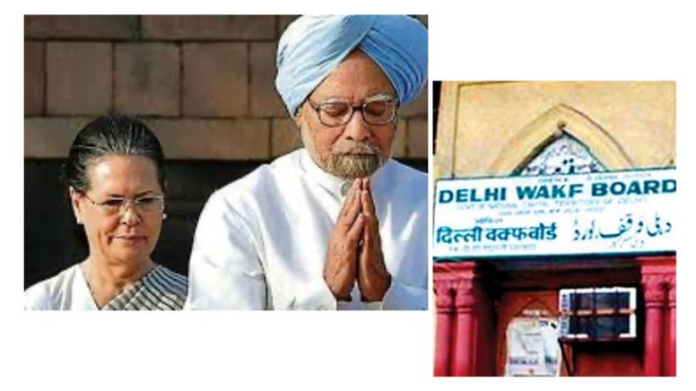 The Waqf Board is a topic that is being discussed widely right now in the nation. Amanatullah Khan, an Aam Aadmi Party MLA from Okhla, was recently detained by Anti-Corruption Branch in connection with the Waqf Board scam. On the other hand, a Hindu-dominated Tamil Nadu village with a 1500-year-old temple has roughly 90% of its land designated as Waqf property. Imagine that even before Islam came into existence, the Waqf claimed possession of the temple. In another instance, the Congress-led UPA government gifted 123 government properties in Lutyens’ Delhi to Waqf in 2014. As per a news report by aTV news channel, the decision was taken by the Cabinet and conveyed through a secret note, just days prior to the 2014 general elections. The properties are located in prime locations such as Connaught Place, Ashoka Road, Mathura Road and other VVIP enclaves.

For the unversed, in essence, a Waqf is a piece of land owned by a religion. If a property has been utilised for religious or charitable purposes for a long time, it may be considered Waqf. Once a property is recognised as Waqf, the Waqf Board is in charge of it. The Waqf Board has been charged with acquiring public lands and areas and turning them into Waqfs. When a mosque or mazar is built and used as a place of worship, the Waqf Board has the authority to designate that property as a Waqf property.

The Waqf Board owns a huge amount of real estate. A joint parliamentary committee report from 2009 under the direction of K Rehman Khan states that it has about 4 lakh registered properties and over 6 lakh acres of land. All of India’s Waqf Boards collectively own 8 lakh 54 thousand 509 properties distributed across more than 8 lakh acres of land, according to the Waqf Management System of India. It is obvious that the Waqf Board’s property portfolio has increased significantly over the past 13 years.

Now shouldn’t we ask ourselves the question how did a board for minority welfare come to own such a large amount of land? The answer lies, as always, with the Congress, the root cause of every ill in this country. First thing first, to safeguard the Muslim properties in Bharat, the “Hindu by mistake” PM Jawaharlal Nehru enacted the Waqf Act of 1954. And to appease Muslims in the aftermath of Babri demolition, the Waqf Act of 1954 was revised by the PV Narasimha Rao-led Congress government in 1995, granting the Waqf Board unrestricted authority. Any property, that is regarded by Muslim law as Halal (holy), religious (religious), or charitable (charitable) for any purpose, shall become the property of the Waqf, according to Section 3(r) of the Waqf Act 1995. According to Article 40 of the Waqf Act of 1995, the Waqf Board and Surveyor of Waqf will decide whom this land belongs to.

The Waqf Act also says that the disputes related to lands, declared Waqf by the board, cannot be challenged in the SC or HC. If the board declares that a piece of property is part of the Waqf, an appeal must be made to the Waqf Tribunal rather than to the court. Imagine the Extended Institution of the same Waqf Board will hear the complaint against the Waqf Board, who made the incorrect claim! Here the question again arises, if someone feels the tribunal cannot be doubted, then why is there no similar law, similar tribunal for non-Muslims?

The Congress, it seems, is hell bent on destroying this holy country by hook or by crook. There are many instances in the last 75 years of independent Bharat, where Congress was seen bowing down to its Muslim and Christian masters. The Waqf Act is another such instance, where Congress has forgotten the rich culture and history of our motherland and gave the nation in platter to the Muslims, as its last PM, Manmohan Singh had declared that Muslims have the first right on the resources of this country. The Waqf Act is a tool, through which Congress uses further to dissect the harmony of this country and bring discontent among masses and eventually be in power.

(This article was first published on Uday India on September 23, 2022 and has been republished here with permission with minor changes to conform to Hindu Post styleguide)