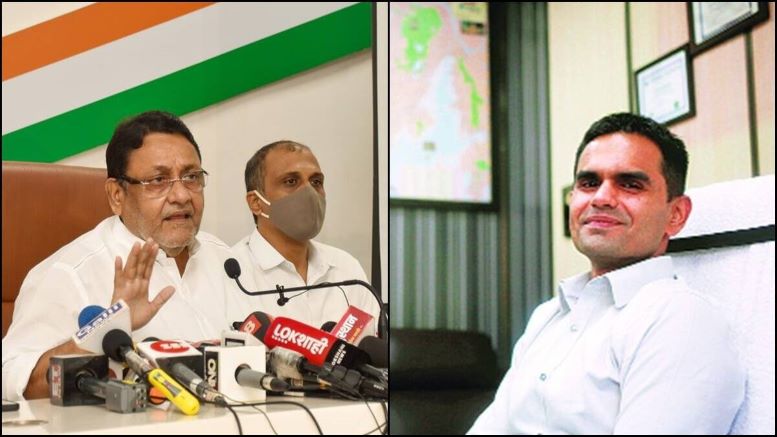 MVA minister Nawab Malik is on a mud-slinging and vendetta spree against NCB officer Sameer Wankhede. Earlier, the minister had threatened the NCB officer who had incidentally arrested Malik’s son-in-law in a drug case earlier this year.

Malik, who has been constantly attacking NCB zonal director Wankhede, has been mud-slinging Wankhede’s family. After having dragged the officer’s parents and sisters, the MVA minister has now alleged that Sameer’s father had ‘converted to Islam and questioned how the officer could be a Hindu when his parents were Muslims. Indirectly, the minister is leveling charges against Wankhede being crypto.

“As per the birth certificate released by Nawab Malik, Sameer Wankhede was a Muslim by birth but appeared for civil services examination in the reserved category and became the IRS. As per Malik, Wankhede forged his birth certificate to pass the exams and land a job through reservations”, reported OpIndia.

Further, the MVA minister has also shared a cropped photograph of Wankhede supposedly from his first marriage according to reports. Claims are also being made that Sameer Wankhede was married to Dr. Shabana Qureshi before he married Marathi actress Kranti Redkar in 2017. Whatever be the authenticity of this claim, the minister surely has no business in getting into the personal lives of an officer and making unsubstantiated claims regarding the same.

Replying to the charges, Sameer Wankhede said “My birth certificate has nothing to do with the case under investigation. Yet, such dirty tricks are being resorted to. Why is my deceased mother being dragged into this issue just because she was a Muslim? Those leveling charges against me can verify my family details from my great-grandfather’s village. I will fight these charges legally”.

it is quite unclear what Malik is attempting to insinuate or if he is opening the pandora box of crypto-converts availing reservation benefits. In the meanwhile, TV9 Marathi has shared the caste certificate of the NCB officer’s father confirming that he belongs to the Mahar caste that falls under the Scheduled Caste category.

Ever since Aryan Khan’s arrest, the MVA minister has launched a tirade against Wankhede. Earlier he even accused the NCB officer of being involved in running an ‘extortion racket’ and that the raid on the cruise was a ‘fake’ one. It is pertinent to mention that independent witness Prabhakhar Sail has leveled allegations that Rs 25 crore was demanded on behalf of the officer to let off Aryan Khan in the Mumbai cruise drugs case.

Sameer Wankhede’s father Dyandev Wankhede in his media statement alleged that Malik has tweeted duplicate documents. He also highlighted that a powerful man like Malik can make use of his power to get duplicate documents made. “I don’t know where he came up with the name Dawood. No one in my 35 years of police service has made such an accusation. I’ve neither changed my religion nor my caste. As far as my deceased wife is concerned, she has made an affidavit and all her details are clear. Unfortunately, she passed away six years ago and can’t defend herself against the accusations made”, Wankhede said.

Attack on Wankhede and his family

Ever since the arrest of Aryan Khan, the personal life of Wankhede and his family have come under the radar of politicians and media. The NCB officer had recently lodged a complaint of being stalked. According to his complaint to the union government and state police, he is being followed even during his visit to his mother’s grave (kabristan). He has been praying at the Kabristan since his mother’s death in 2015.

Wankhede’s wife, Marathi actress Kranti Redkar was also targeted by the media who took to social media to call out a misleading headline published by a Bollywood website on October 6, 2021. She accused the website of casting aspersions and attempting to spoil her as well as her husband’s reputation.

“Sharing the screenshot of the headline of the report published by Koimoi.com, Kranti Redkar Wankhede Tweeted: Dear @Koimoi what r u doing here? just for a few views, you have given a misleading title, for what? I have already fought this case in court n won. I read the full report, it says a case of mistaken identity, but then why this title, why? To spoil my reputation or Sameer’s. Just for money?”, reported OpIndia.

It must be mentioned that the article was published three days after Aryan Khan’s arrest. Therefore, there appears to be a concerted effort to target and harass the NCB officer who has investigated several high-profile cases.

One of the witnesses KP Gosavi, who has been missing, has leveled allegations of being threatened by the Maharashtra police. He said that he has no connection with either Shahrukh Khan’s manager Pooja Dadlani or the NCB. He added that they only provided information to NCB.

Sameer Wankhede is an experienced IRS officer who has dealt with several high-profile cases. He was the investigating officer in the Sushant Singh Rajput case where several people including Rhea Chakraborty were questioned.

Sameer Wankhede has held the posts of Customs Officer at Mumbai Airport, Joint Director of Revenue Intelligence in Mumbai, Additional SP in NIA, and Deputy Commissioner in AIU in the past. The Union Home Ministry presented him with the Outstanding Investigation award this year.

“Sameer Wankhede’s team has seized drugs worth Rs 17,000 crore in the last two years of investigation. According to reports, Wankhede also filed cases against more than 2000 celebrities for not paying tax in customs. Sameer Wankhede also caught Mika Singh with foreign currency at Mumbai airport in 2013 and raided the houses of many Bollywood celebs including Anurag Kashyap, Vivek Oberoi, Ram Gopal Varma”, says OpIndia.

Agencies like the NCB have been working hard and have been doing great service to the nation. In April this year, 340 kgs of heroin had been seized from a Sri Lankan boat. Prior to that, the body had also busted a drug trafficking syndicate based out of Pakistan and Sri Lanka.

However, for the MVA government personal vendetta appears to reign supreme as it is well-known that Bollywood has often stood by MVA despite its poor track record. Maybe MVA and Malik are simply returning the favor by targeting an agency and its officers who are doing their duties with diligence.