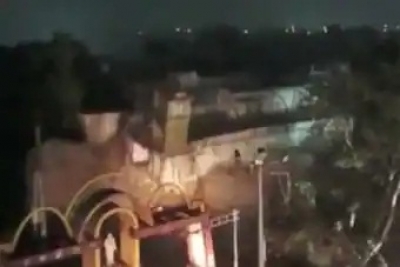 The Madhya Pradesh authorities have demolished a four-storey hotel using at least 60 dynamite sticks in Sagar district. This is perhaps the first instance when dynamite was used to demolish a building ever since the Shivraj Singh Chouhan-led BJP government initiated punitive action against those accused of murder or rape.

The hotel, which was brought down on Tuesday night, was owned by BJP leader Mishri Chand Gupta, who is accused of killing a youth of the Yadav community in the district in December last year.

The district administration said permission was taken for a two-storey shopping complex, but a multi-storey hotel was built and was being operated there. “In view of the safety aspect, traffic was stopped by placing barricades around the intersection. People living in the buildings around the hotel were also alerted. There has been no loss of any kind. Only the building was demolished,” said District Collector Deepak Arya.

As per the police, Gupta’s wife had contested the urban local body elections on a BJP ticket and lost to a Congress-supported candidate from the Yadav community. On December 22, Gupta had allegedly crushed Jagdish Yadav under his SUV, who later died in hospital. The incident was recorded on a CCTV camera. Since that incident, the politics of the Sagar district have heated up.

The Sagar district police had registered a case of murder against eight accused in this case. Out of these, five were arrested. Mishri Chand Gupta and two others are still absconding. Along with the main accused, Lavi Gupta, Honey, Lucky, advocate Chand Gupta and Ashish Malviya were arrested and sent to jail.

The deceased, Jagdish Yadav, was the nephew of independent councillor Kiran Yadav, who defeated Gupta’s wife Meena by 83 votes in the civic body polls.

The Madhya Pradesh Chief Minister has initiated a bulldozer drive as part of the punitive action against wrongdoers in the state. This has been the main reason people started comparing him with Uttar Pradesh Chief Minister Yogi Adityanath. Chouhan’s bulldozer action had begun in the first quarter of 2021, and since then thousands of illegal buildings have been demolished across the state.

The killing of Jagdish Yadav has sparked outrage, and with the Assembly elections approaching, the state BJP unit tried to retrieve the situation by suspending Gupta from the party. Both the BJP and the Congress left no stone unturned to win over the Yadav community in the Sagar district.