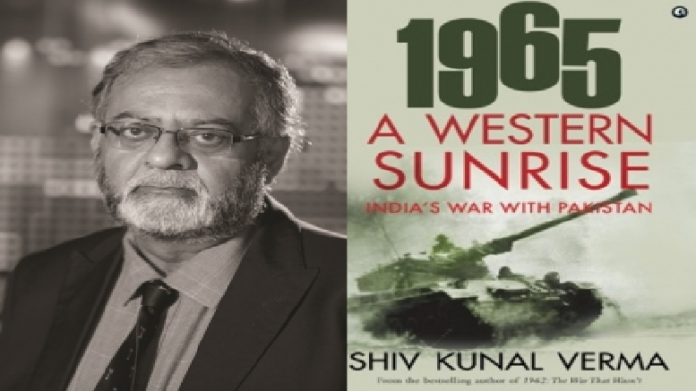 At a time when Bharat is celebrating the 50th anniversary of the victory over Pakistan in 1971 that led to the creation of Bangladesh comes a definitive account of a war six years prior to that which also ended in a military victory but which came to naught with the hard-fought territory being returned without any political or diplomatic gains.

Noted military historian Shiv Kunal Verma’s “1965 – A Western Sunrise” (Aleph) is focused on the 1965 war, but if one is to consider the larger picture, it would seem that China has drawn a lot of lessons from Bharat’s setbacks right from 1948.

In 1948, the Indian Army valiantly prevented the fall of Srinagar and thus the fall of the entire J&K but this gave a permanency to the Kashmir ‘problem’. Bharat also lost what is now called POK. The 1965 war eventually ended in a stalemate and Bharat gave back some hard-earned territory — Haji Pir and Titwal, among others — without any resolution on Kashmir. After the 1971 war, Bharat returned 93,000 Pakistani PoWs without the Simla Agreement resolving Kashmir. The 1999 Kargil operations were decisive but the Bharatiya establishment does not seem to want to take notice of this.

What is the lesson that China seems to have drawn? That Bharat can be pushed without the possibility of retaliation? Is the incursion in Eastern Ladakh and the continued PLA presence — with repeated consolidation without any intention of withdrawal — a sign of this? The Indian Army chief, General M.M. Naravane has declared that “if the Chinese are determined to stay, so are we” — leading to a sharp riposte from Beijing. Where is this long haul going to lead us?

Does China take this as a sign that when push comes to shove, the Bharatiya leadership will not walk the last mile?

“China was nowhere on the scene when India got its Independence. Then first Sinkiang (Xinjiang) in 1949 and then Tibet in 1950 came under the direct control of the PRC which was Mao’s Communists. This meant the dynamics of our Northern border changed completely. What was worse, neither did our leadership nor we as a people, really seem to understand what was really happening.

“This lack of understanding of geo-politics has hounded us as a nation. How else can we explain what happened in 1949…going to the UN over Kashmir was Mountbatten’s agenda, not Nehru’s, even though the Indian Prime Minister copped the blame for it later. In 1963/64 the former Viceroy of India was back again, pushing Nehru towards a settlement with Pakistan over Kashmir and they almost pulled it off,” Verma said.

After the 1962 Sino-Indian War, “it was almost as if India had to now negotiate from the loser’s position with the Pakistanis. Let’s face it… we were always two steps behind the rest of the world when it came to these matters. There were powers at play and the people of India and Pakistan — especially the people of Jammu and Kashmir on both sides of the Cease-Fire Line were taken for a massive ride. Pity is, the original issues were soon buried and over a period of time, every event developed its own tail… and ever since the tail continues to wag the dog”, Verma explained.

“You’ve got to face up to the Chinese and the sooner we do that the better,” he asserted.

“Economically the PRC has run away (ahead) not only from India but also most of the countries in the world. The way I see it both their ‘highway in the sky’ — the almost 4000 km long G-219 and the sea lanes that run past the Malacca Straits — are vulnerable to Indian missiles that need to be deployed purely as a deterrent.

“Then, if the PLA comes calling in Arunachal or Sikkim or Barahoti or Ladakh – or even in Nepal and Bhutan – you have put your cards on the table already. If nuclear weapons can act as deterrents, why not conventional ones? Surely we haven’t spent all these years developing a variety of missiles only to parade them on Rajpath during Republic Day,” Verma asked.

Still, this is not to detract from the seminal value of Verma’s book on the 1965 war, during which the junior officers and men of the Indian armed forces acquitted themselves admirably despite the on-the-fly reorganisation of the forces, lack of intelligence, obsolete equipment, and lacklustre military leadership at a cost of 12,714 casualties, out of which 2,763 were killed, 8,444 wounded and 1,507 missing.

“In 1965, most army units were either being reorganized or had just been raised. They were hurriedly pushed into combat, sometimes with unfamiliar equipment. Quite a few decisions taken by the then Chief, General J.N. Chaudhury, the Western Army Commander, Lt Gen Harbakhsh Singh, and the 11 Corps Commander, Lt Gen Joginder Dhillon, defy conventional wisdom. Deploying 4 Mountain Division in Khemkaran where the main Pakistani armoured thrust was expected…1 Corps was also raised and pushed into combat. 14 Infantry Division was still being raised… quite a long list,” he explained.

In 1965, while Bharat was still licking its wounds from the disastrous 1962 war, the belligerent Pakistanis attempted to wrest Kashmir from Bharat. To test the waters, they launched their first military probes into the Rann of Kutch between February and May; Bharat responded. By the end of July, Bharat gave in to the dictates of the UN and stood down the troops it had mobilized in the Punjab and Kargil sectors in response to the Rann of Kutch skirmishes. Pakistan then launched its masterstroke — Operation Gibraltar — in Kashmir in August. Nearly 12,000 trained mujahids were covertly deployed in multiple groups, each named after historical plunderers of the subcontinent. Confident that they had superior armour (M-47 and M-48 Patton tanks), better fighter planes (F-86 Sabres and F-104 Starfighters), and better submarines (Daphnes) than Bharat, the Pakistanis expected that in the event of an expanded war, the Bharatiya’s would collapse just as they had against China in NEFA three years previously. However, Bharat repulsed the attack and cut off the entry and exit points into the Kashmir Valley by capturing the Haji Pir Bulge.

Operation Gibraltar fizzled out. Pakistan then launched Operation Grand Slam in September 1965 in Chhamb and Jaurian. The resultant Indian counter-attack saw the focus shift to various other sectors — Lahore, Barki, Kasur (Khem Karan), Fazilka, Sialkot, and Barmer — on the international border. With the two air forces getting involved almost immediately, the armed skirmishes turned into a full-scale war.

Much territory was gained — but returned after the Tashkent Agreement and hence the stalemate.

To return to the present: has Bharat boxed itself into a corner with the QUAD agreement that effectively limits its negotiating space with China on the boundary dispute?

“World War III, for all we know, may have already begun at the end of 2019 (when the pandemic first emerged),” Verma said.

“The struggle for a new World Order has been going on for quite some time and while all eyes at the time were on Taiwan and the South China Sea, the fight is across various genres and is being fought on various continents — East Africa, South Asia, frankly even on North American soil.

“QUAD is fine up to a point but India, despite its actual land proximity and dominating position in the Indian Ocean, is a junior partner to the US. Historically, no one, absolutely no one, has ever got into bed with the Yanks without getting sold down the river. In any case, India has to eventually walk alone–fall back on Tagore’s famous poem — Ekta Chalo Re! Just make sure you carry a big stick… that’s all,” Verma concluded.