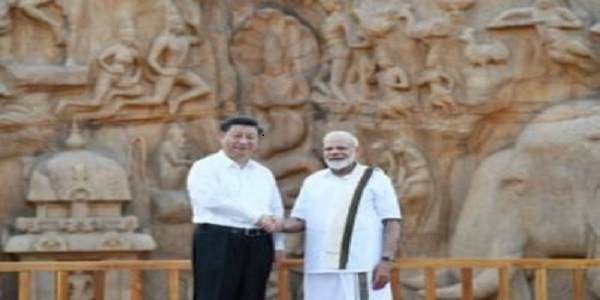 During this supposed friendship between the two leaders, both nations have been involved in sporadic skirmishes which have threatened to snowball into bigger battles many a times. The Doklam stand-off and scuffles & encroachments in Arunachal by the Chinese are just a few examples.

Since the Doklam face-off the Chinese have fortified their positions around the chicken’s neck with the construction of underground bunkers and better access as the satellite images have shown. In fact, since then the Chinese under Xi have cozied up to Bhutan, another of Bharat’s close friend, and are negotiating a deal of the plateau which falls in Bhutan’s territory. If the Chinese are able to strike a deal with the Bhutanese, which they are so good at, then it will be a big security threat for Bharat.

The story is no different in Nepal where the new government of PM KP Sharma Oli has opened up its territories for the dragon and the Chinese President has seized the moment by announcing more than 55 billion rupees of investment in Nepal, apart from the trans Himalayan railway line connecting Chinese controlled Tibet with Nepal.

The visit by the Chinese President after 23 years to the himalayan kingdom signals a major shift in Nepal’s foreign policy. These are serious developments for Bharat in its backyard as the expansionist policies of China coupled with its economic and military muscle threatens to alter the geopolitical scenario for Bharat.

China under Xi jinping has been pursuing a policy of buying out small nations and economies by drenching them with funds and then pulling the nooze when they are unable to pay. Sri Lanka another of Bharat’s neighbor is a case in point. The island nation has been ceding control of its major ports to China including Hambantota in order to pay back the huge Chinese debt.

In 2007 Beijing provided the then Sri lankan President Rajapaksa military support to crush the Tamil Tigers. This was followed by high interest loans and high profile construction projects in Sri Lanka resulting in mounting debt for the island nation. In fact, the ‘Chinese Debt Diplomacy’ has held many nations in the ‘Chinese Debt Trap’.

An article appearing in Quartz has named 8 countries in the dreaded Chinese debt trap including Djibouti, Kyrgyzstan, Maldives, Mongolia, Pakistan, Tajikistan apart from Ethiopia, Zambia and Sudan. Nepal and Bhutan could soon join that list which will be a big test for Bharat’s diplomacy and military.

China has been aiding and abetting Pakistan openly against Bharat for decades and its open support for Pakistan at the UN on Kashmir just before Xi jinping was to land in Chennai for the rendezvous with our PM defines its stance towards Bharat. Beijing vetoed Bharat’s move to categorise Masood Azhar and Hafiz Saeed as international terrorists time and again. It has opposed Bharat’s entry to the NSG. It is on the verge of upsetting the regions applecart by forging new deals in Bhutan and Nepal which is bound to test our foreign policy and military as it opens up new frontiers to guard against. The trade imbalance which is close to 60 billion dollars in favour of China needs immediate correction.

Mahabalipuram, where the two leaders met was selected for the summit as it has ancient trade links with Quanzhou a part of Fujion province in China in the 7th century. But as of now that trade is totally lopsided and Bharat will have to do some quick thinking to correct this huge imbalance. In fact, this could be the only weapon to arm twist China as we cannot match the military might of the Asian giant.