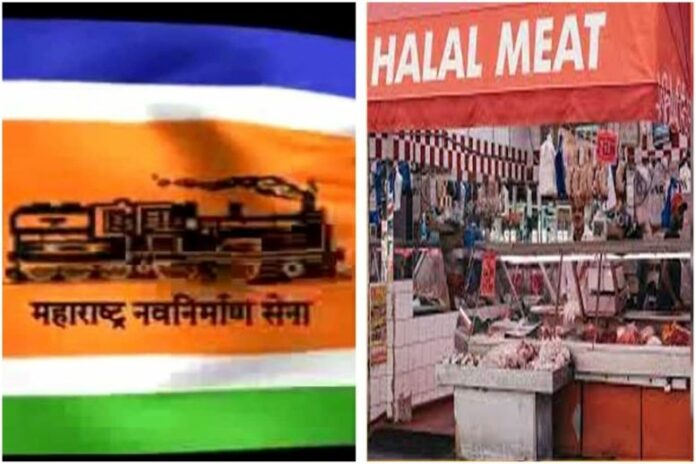 Raj Thackeray-led MNS (Maharashtra Navnirman Sena) has launched a “Say No to Halal” campaign. The party highlighted that the halal industry is the largest terror funding mechanism. It also says Hindus have lost their revenue and livelihood to the Islamic industry.

“The importance of halal meat has risen so much that the jhatka meat business has suffered heavily. This mechanism is also targeting vegetarian foods and non-meat-consuming people”, notes a party release. Maharashtra Navnirman Vyapari Sena President Yashwant Killedar has written an open letter asking people not to consume halal meat.

“In a way, we are funding terror at our own expense. We should stop this in Maharashtra by saying No to Halal. We require people to create a movement around this cause, and we request people to join this cause,” Killedar’s letter says. While urging people to join the campaign, he also stated that halal was a cruel Islamic method of slaughtering animals.

Killedar highlighted that non-Muslims consume jhatka meat. The fast-growing halal industry is affecting jhatka meat sellers who are largely drawn from Hindu Khatik and Valmiki communities. It is important to put an end to this business in Maharashtra and hence we want the masses to support us. We also need volunteers to make this campaign a success.

People are unaware they are supporting and sponsoring terrorism by spending their hard-earned money on such products. “Furthermore, it is not just meat but Jamat Ulema-e-hind’s hold and footprint is increasing even in products such as chips, biscuits, lipsticks, and chocolates among others”, stated Yashwant Killedar. In a video message, MNS leader Siddharth Mohite said the party was opposed to non-Muslims being forced to consume halal products.

The party had earlier protested against the use of loudspeakers in mosques. “I don’t oppose one’s right to pray, but the loudspeakers on the mosques must be removed. I request the government to get them removed. Otherwise, I tell this right now, we will put double loudspeakers to chant Hanuman Chalisa right in front of those mosques. Which religion mentions loudspeakers? Was there any loudspeaker when your religion was invented?”, the MNS chief said in his speech.

A similar campaign has been launched in neighbouring Karnataka by Hindu organizations. It has come to light that several hotels in Bengaluru have replaced the word halal with jhatka on their name boards. Protesting organizations have appealed to the public to say no to meat served using the Islamic slaughtering method.

HinduPost had earlier highlighted how minority domination/tyranny is being unleashed in Bharat through halal certification. This is nothing but an attempt to impose upon non-Muslims a deeply troubling and rooted in Islam rule. This is violative of both the SC/ST Act and Articles 14 & 25 of the Constitution.

In his article titled “The Most Intolerant Wins: The Dictatorship of the Small Minority,” Nassim Nicholas Taleb explains how a small minority dominates over the food choices of a majority of the population with whom they cohabit a place. Essentially, economics would dictate a company to choose Halal because a consumer of non-Halal food may eat Halal; the opposite is not true. Therefore, companies would prefer getting a Halal certification to avoid loss of business.

And Bharat has not escaped this dictatorship of the minority as well. An article in Swarajya points out that although Muslims are just 15% of the country’s population, a significantly higher proportion of Halal meat is being sold in Bharat and the number is only rising every year.

It is essential to point out that Islamic certification isn’t limited to meat alone and is now being extended to other products as well. Hindu society at large must understand the implication of such certification and the need to raise our voices against such religious discrimination.

This Diwali, stay away from Halal-certified groceries and cosmetics; don’t sponsor Jihad with your festival

Campaign against halal products in Karnataka