Millionaire MLAs of a debt stricken state indulge in freebies for self, inviting public wrath The MLAs brought changes to The Salaries and Allowances of Ministers (HP) Act 2000, for the passage of hike in allowances that allow all legislators to travel abroad with their spouses and unmarried children with a Rs. 4 lakh reimbursement. This will mean an additional burden of Rs. 2.5 crore on the state exchequer which is already reeling under a debt of Rs. 50,000 crores.

The amendment was passed almost unanimously with just one legislature opposing it, showing the utter apathy and insensitivity of the public representatives to the plight of the common man and the state’s financial predicament.

These funds which the MLAs chose to spend on their own luxury could have been better spent on building a few shelters for the poor who have been rendered homeless due to the recent nature’s fury. 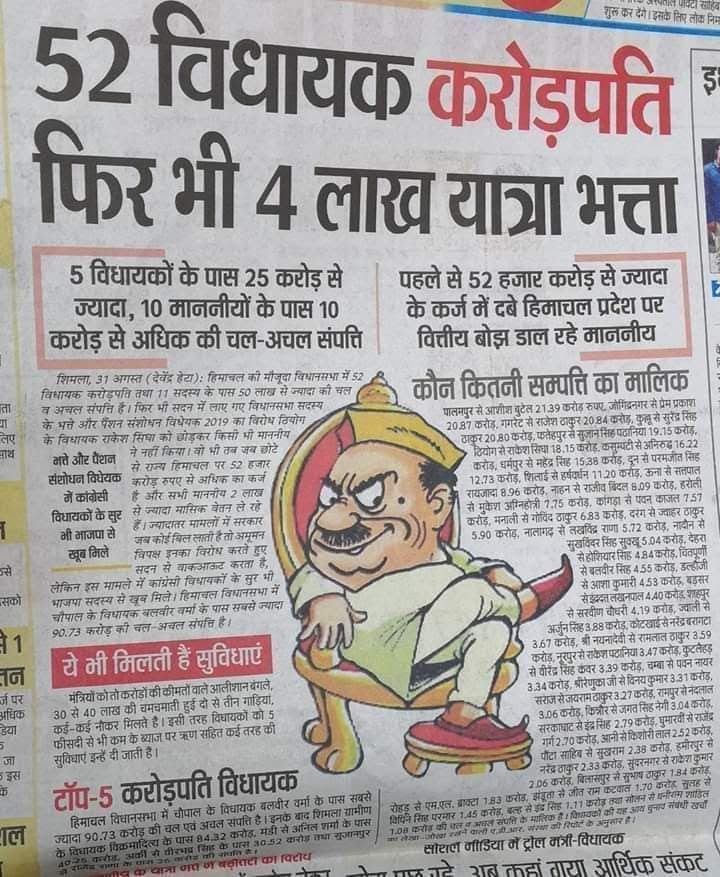 The state’s loss has been assessed at 400 crores in the recent monsoon and the government, instead of showing some sensitivity, acted in utter indifference by moving this amendment for the hike. The callousness of all 68 MLAs, barring one, is palpable as the state is fund starved and the government is surviving on borrowed money.

All Chief Ministers of Himachal, including the present incumbent, have had a history of going to Delhi with a begging bowl or resorting to borrowings to meet the state’s expenses and pay previous debts. Last year in September, when the Chairman of the 15th Finance Commission, Mr. N K Singh, visited the state, he remarked that the debt to GSDP (gross state domestic product) ratio of 38% was unacceptable and unsustainable and stressed the need to bring down the debt by Rs. 1200 crore.

However, far from adhering to his advice, the government has increased the debt to GSDP beyond 40% in the last one year by taking more loans to service its previous debts, which is a classic sign of being in a debt trap. With more than 45% of the revenue being spent on payment of salaries and pensions, and almost 35% being consumed to pay previous debts and interest, there is very little that remains for development, and out of this very little if the public representatives decide in their true wisdom to fritter a part of that depleted fund for their own good, only God can help this land of Gods (as Himachal is also called so) since  the elected representatives who were supposed to look after the interests of the state are busy looking after their own interests.

In fact, one Congress MLA, justifying the hike in travel allowance, went on record saying that he received so many visitors that even his tea expenses could not be met.

The unemployed youth of the state have drawn strong exception to this self-eulogising act by the MLAs and have started a campaign to collect one rupee (1/-) from people of the state to be donated to the poor MLAs of the state. This campaign has gathered pace, particularly in Mandi, which is the home district of the CM, and in Shimla.

However, such  extravagance at the expense of the public by MLAs and MPs is not unprecedented and such bills and amendments are brought at the fag end of every session and are passed without a whimper which is disdainful and reprehensible.