The Kodakara heist case happened three days prior to the Kerala assembly elections, in which money being transported by Shamjeer Shamsuddin was looted at Kodakara, Thrissur (Trichur). The attackers waylaid Shamjeer, assaulted him, and took off with the cash and his car. The incident came to light when the victim complained to the police.

The first arrest of an accused happened twenty days after the date of the robbery. By then the CPM entrusted, like-minded media had twisted the loot into a fantasy bribe-for-votes scheme purportedly done by the BJP at the behest of its state president, K Surendran.

K Surendran has now moved court against Mathrubhumi, a CPM-leaning Malayalam news channel. Though they could not produce a shred of evidence,  Mathrubhumi alleged that huge sums were received from the central BJP and that some local leaders, in connivance with central minister V. Muraleedharan, misused those funds for personal gain and invested that money in other states! 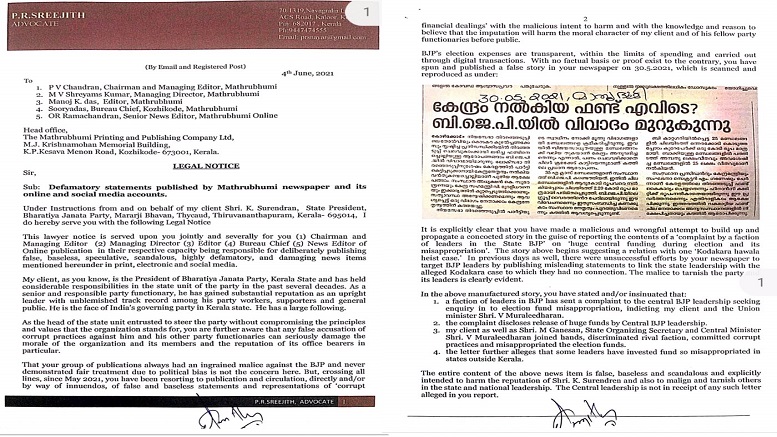 Instead of working on the full recovery of the stolen Rs. 3.5 crore, the local police seems to have taken the mobile call records of the victim and complainants, and is now calling up each and everyone on their incoming and outgoing lists! Questioning of the alleged BJP members on that call list is being given priority.

It is being reported that Rs. 1.05 crore of the stolen money has been ‘recovered’ by the police. But even that recovered amount seems to fluctuate depending on the media outlet, and some mention it as Rs. 1.30 crore. Some even mentioned around 350 grams of gold that was supposedly bought using the stolen money.

Veteran CPM leader Kodiyeri Balakrishna has tried seven times since October 2020 to get his son (jailed for not being able to show sources for funds received online through drug-running) released on bail and failed each and every time. He is now believed to be using his admirers and beneficiaries in the media to implicate K Surendran’s son in a false case.

Police have not been able to connect the alleged hawala money with the BJP in any fashion till now. The latest heard is that having stayed in Kannur and Kozhikode for three days and found nothing of the still missing money, police now say that someone from their midst is informing BJP leaders about raids! Oddly enough, BJP leaders are being questioned, but out of 21 arrests made till now, reportedly almost all belong to either the CPM, CPI, SDPI, or the Muslim League.

A CPM worker named Rajin from Kodungallur is being interrogated for his alleged role in helping the main accused Ranjith. Rajin is also accused of the murder of not one but two BJP workers, Sathyesh (in 2006) and Vallathu Pramod (in 2016). One accused still absconding is also a CPM worker from Kannur named Shikil who seems to have received 10 lakhs.

It is also not clear why authorities and many media outlets like The News Minute, The Hindu are terming the stolen amount as ‘hawala money’. No evidence has been provided as yet of any hawala transactions. The complainants have approached court demanding that the confiscated money be released as it is needed for their business purposes.

Hawala is an informal and illegal system of money transfer which is preferred by anti-nationals and criminal syndicates. Developed by the South Asian Islamic community, the hawala system provides anonymity in transactions and avoids regulatory oversight through an informal network of brokers and operators. Funds arranged abroad, usually in the Middle East, are transferred in local currency often as cash making it extremely difficult for authorities to trace.

So was the ‘hawala’ angle introduced just to sensationalize the case and divert attention from the highway robbery by ruling party goons?

Amidst the chaos, even some BJP ‘allies’ trained their guns at the party. Vellapally Nateshan, the SNDP chief and BJP ally BDJS President Tushar Vellapally’s father, said that ‘everyone deals in black money during elections but only fools like the BJP get caught’.

The manner in which CPM cadre are being arrested for the robbery and the discontent amongst ground-level workers appears to have forced the party leadership to distance itself from the controversy and investigation.  CM Pinarayi Vijayan now says that the state police has handed over all details to the Enforcement Directorate (ED)! The same agencies against whom he and his IPS cadre had foolishly moved the court in the gold smuggling scam, cases that the Kerala High Court immediately quashed. Maybe the CPM fears that the narrative being built up around ‘hawala’ and voter bribing may backfire on them in the long run.

However, the local media such as Mathrubhumi continue to sell the same lies to Keralites 24×7. However, even K Surendran’s legal notice lacked direction as to what the BJP expects from the Mathrubhumi group.