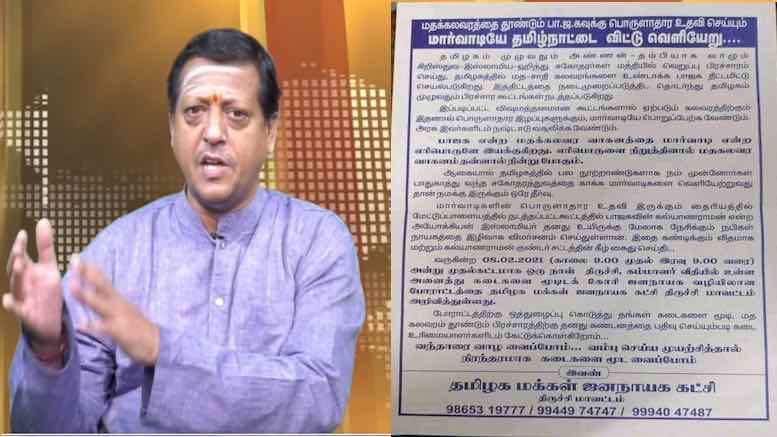 After Islamists threatened local Marwari community in Tamil Nadu recently, many political observers have spoken against the accelerating Islamic radicalisation problem in the state.

Shri Bala Gauthaman, director of Vedic Science Research Center, Chennai, has issued a video addressing the issue. An Aeronautical Engineer who went on to do his M.Phil in Sociology, Shri Gauthaman is also a documentary film maker who has made a documentary on the Jihadi threat to Tamil Nadu and other topics.

Transcript of the video:

“A Muslim outfit under the guise of a Tamil name Tamizhaga Makkal Jananayaka Katchi, literally meaning Tamil People’s Democratic Party, was registered in 2007 by one Mr. Sharif. This organization issued handbills in central Tamil Nadu in the city of Tiruchirapalli asking the Marwaris to vacate and go, and the reason they cited is that the Marwari community is funding the Bharatiya Janata Party. The handbill also says-

“The Bharatiya Janata Party members are abusing Islam; so the thing is to stop the abuse against the Muslims, you have to take the fire out of the party. The only thing we can do is to send these Marwaris out because they are funding them (BJP)”

So if that is going to be the case, our question is very simple: if you say that a group of people are funding and because of that funding, some abuse of a particular religion is happening, then from 1989 to till date, 136 Hindus and policemen were killed by Islamic Jihadis and during these 30-40 years, you can see a tremendous rise in business among the Muslim community. Muslim community has entered into almost all businesses.

Previously they were confined only to some tannery business or they were confined to second-hand sales of iron or other things. But when the Muslims started to flourish in business, more people are killed by Jihadis. If I go by this theory, this benchmark of abusing a particular religion, then this means that no Muslims should start a business, if I go by this particular benchmark about what is really fuelling religious bigotry.

This is where we need to understand why the Muslims are doing it, and why they are using this political party to do this. The first point is, over the last 30-40 years, the business community in Tamil Nadu which once dominated the business landscape like the Chettiyars, the Nadars, the Asaris and most of these guys are now losing their business and Muslims have now entered into all business segments.

Now, grocery shops are run by Muslims, the Muslims previously were not there. Supermarkets run by Muslims, Muslims were previously not there. Mobile recharge, mobile service once dominated by Marwaris are now taken over by the Muslims. Fancy stores entirely under Muslim domination. Eateries –  now Muslims are firmly having the hold in that particular business. Name any business, the Muslims have taken over almost most of the business in the past  30 years. So now, the only challenge for the Muslims in terms of business is coming from the Marwaris. So the Muslims wanted the Marwaris to be out of this space.

The reason is simple: if you have economic power with you, automatically you will be having a monopoly in that particular area; in terms of police or in terms of administration whatever, because if you are strong in business you dominate that area and this is what the Muslims want. They don’t want a challenge, their only challenge is the Marwaris. The other communities they are able to convert. But as far as Marwaris are concerned, they are not able to convert them. So, throw them out of the city and this is the latest strategy now adopted by the Muslims.

Then why this pseudo name – Tamizhaga Makkal Jananayaka Katchi? It is obvious..if you use this Tamil jargon, automatically, a state which is riddled with linguistic chauvinism, you can make use of it. That is why they are camouflaging their intent in a Tamil name and doing this activity. This is not a challenge against the minority Marwari community in Tamil Nadu, this is a challenge against the entire country, the entire Hindu religion.

In Krishnagiri district, the Muslims attacked a Biryani shop saying that the Hindu is selling the Biryani without doing Halal (ritual slaughter of animal as per Sharia) and that shop is being attacked. So here there is no Marwari. The person who is selling that particular meat is from Tamil Nadu, he is not a North Indian, he is attacked claiming that he has not provided Halal meat to his customers and this is the allegation made by them to attack.

No big police action has been taken on that. And now, in this case, when the Marwaris are asked to shut down their shops and go, the police have not filed a case against them (the Islamists) initially. They filed a case against Marwaris and the local Hindus who went to the police station to seek justice for the handbills which were circulated. Then finally, after the intervention of the BJP leader H Raja, a case was filed against the culprits.

What I’m recollecting now, we have learned about what happened in Sindh and elsewhere in undivided India before 1947. The Muslims asked Hindus to vacate within 24 hours or else they will come and take their property away, come and take their daughters away. Lakhs of Hindus fled their homeland. This happened during the partition. And now issuing notice like this, I’m seeing that the act before partition, what Mohammad Ali Jinnah did on those days is now getting enacted in Tamil Nadu. And you have to understand the population of Muslims in Tamil Nadu is mere 6%, not more than that. With 6% of the Muslim population, if this is happening in Tamil Nadu, just think what will happen to the poor Hindu community if their population is going to exceed 8% or 10%”