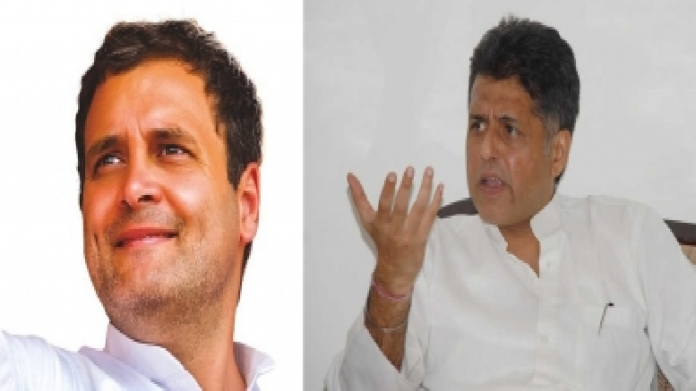 Congress MP Manish Tewari on Wednesday targeted Rahul Gandhi and said the party leaders should not indulge in Hindutva debate, ‘which is miles away from the core ideology of the Congress’.

Speaking to IANS on Phone, Tewari said, “Congress philosophically should not indulge in this debate which is miles away from its core ideology.”

Tewari emphasised that the party should stick to its core ideology and should not deviate from it as the party leaders in the past tried to toe a ‘soft-Hindutva’ line to counter the BJP.

He said, “Those people who believe in ‘Liberalism and Secularism’ should be in the party, otherwise if you want religion to be part of politics then you should be in the right wing parties not Congress, which believes in secularism.”

Later in a tweet, Tewari said, “In Hinduism VS Hindutva debate some people in Congress miss a fundamental point.If I were to believe that my religious identity should be basis of my politics then I should be in A Majoritarian or Minoritarian Political Party.I am in Congress because I believe in Nehruvian Ideal that Religion is a private space activity. Everyone has the right to practice, profess and propagate their religion in their private lives. In Public domain there should be a strict separation of the Church & State.I am a Hindu,I worship my God but that is not my politics.”

“In the global struggle between Right Wing Populism and Liberalism Proggressive parties can not ever win hearts and minds of people if they offer ‘ersatz’ ideologies predicated on religion & caste bereft of core convictions and pluralistic beliefs,” he added in the tweet.

The whole debate started with Salman Khurshid’s book where he compared Hindutva with ISIS.

Tewari also said that it has to be accepted that Congress’ ideology has been overshadowed.

“Today, whether we like it or not, the divisive and hateful ideology of the RSS and BJP has overshadowed the loving, affectionate and nationalistic ideology of the Congress, and this is what we have to accept,” he said.

“But our ideology is alive, it is vibrant. We have to propagate our ideology by training our own people and by involving them in a conversation about what it means to be a Congress person and how is that different from being a RSS person,” Rahul Gandhi said.