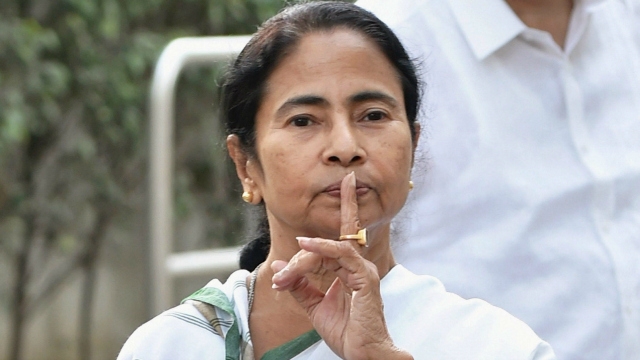 An unprecedented situation has been created in Bengal on 3rd Feb, 2019, unheard of in independent Bharat, by none other than Ms. Mamata Banerjee, the Chief Minister of West Bengal. The CBI, observing all official formalities, had gone to discharge their duty at the official residence of a Government servant who is holding the post of Kolkata Police Commissioner, but were heckled, obstructed, threatened and stopped from discharging their official duty by some police officials. Not only that, a few CBI officials were forcefully bundled in a vehicle and taken to the nearby police station and threatened to be arrested.

Now, this Police Commissioner is none other than one Shri Rajeev Kumar who had for long been evading CBI inspite of the agency serving notice on him time and again. He is purportedly an accused and reported to have destroyed evidence when he headed the SIT probing the Saradha chit fund scam. Interestingly, this team was formed ostensibly by the Govt. of West Bengal to unearth(!) the scam that had occurred. However, on instruction from higher ups, he reportedly destroyed evidence to save TMC bigwigs.

As Shri Rajeev Kumar was evading CBI notice, the agency thought it fit to question him at his residence. That’s when the Chief Minister found it convenient to make political capital out of it. She sat for ‘Political Dharna’ along with a few Govt. employees including Shri Rajeev Kumar, some ‘Babus’ and TMC netas and workers.

The ‘Babus’ (some of whom are IPS officers) who took part in the ‘Political Dharna’ have violated the relevant provisions of The Central Civil Services (Conduct) Rules, 1964. The ‘Babus’ or for that matter Mamata have directly or indirectly incited the rest of Bharat’s State and Central Government employees to defy the established law in force.

As for the Police Commissioner, he skipped the meeting of full bench of Election Commission when it met in Kolkata recently, inspite of the fact that due letter was sent to him well in advance to attend the same. Ms. Mamata Banerjee commented that “.. Kolkata Police Commissioner is a man of integrity…” This has evoked both suspicion and raised eyebrows from knowledgeable circles, privy to the ponzi scam.

Now, why has the WB Chief Minister started this dangerous game of one-upmanship? Political analysts and persons keeping tab on the rise of TMC in Bengal have come out with some startling revelations which are stated hereunder :

a) For long, Mamata had been raising the bogey of “attack on Federalism by Modi Govt”. Now, this did not cut much ice amongst the general public other than a few opposition parties aligned to her. Of late, Govt. of West Bengal shunned entry of CBI in the state following the example of Andhra Pradesh. However, the agency in the discharge of their solemn duty did not hesitate even to visit Police Commissioner’s residence, as law is applicable for all, which infuriated the Chief Minister and the cry of ‘infringing federal structure of Bharat’s Constitution’ went up. With this she embarked on the path of uniting the opposition and to prove to the country that she is the ‘saviour’ of India’s constitution.

Further, the opposition leaders, many of whom themselves are under the CBI scanner, were bolstered by her actions, despite knowing fully well that it is not the Union Govt. but Mamata who has hurt the roots of Bharat’s federal structure. Her move was well calculated and deliberate. She was upset with a few opposition leaders who after going back to their respective states from the Brigade rally in Kolkata did not endorse her as the ‘Consensus Prime Minister’ for the forth coming Lok Sabha election.

b) The ruthless suppression of opposition parties in Bengal demonstrates her scant respect for democracy. Burning down of party offices of CPI(M), Congress, BJP, destruction of vehicles of opposition parties, unleashing of police atrocities and framing of false cases on opposition workers, spreading of terror by TMC goons in rural Bengal in areas dominated by opposition are the hall mark of ruling party of Bengal.

c) A master plan is afoot by TMC to plunge Bengal in chaos with the sole objective to create law and order problem. TMC by creating a mass upsurge in the form of destruction of public vehicles and attack on opposition cadres may create a situation for imposition of President’s rule, so that a sympathy wave can be gathered by TMC. This would enable TMC to garner more Lok Sabha seats which they are set to lose this time. The Union Govt. should tread cautiously and not get trapped by TMC.

d) TMC hierarchy has been taken aback by the massive rally of Shri Amit Shah, Prime Minister Shri Narendra Modi and the video-conference rally of Shri Yogi Adityanath, Chief Minister of UP in different parts of West Bengal. Such upsurge of people happened even after threats, coercion, violence, burning of vehicles transporting the cadres of BJP and common people coming for the rally.

In no other state of Bharat other than West Bengal are such flimsy issues raised by ruling dispensation to stop the opposition from holding marches or rallies. Helicopters are not given permission to land, land is not given to hold rallies and so on and so forth. The civil and police officials have become utter stooges of the ruling party. The officials have to seek permission from Trinamool higher-ups. Such naked mocking of democracy is unheard of in rest of Bharat. Sadly, courts, including SC, have also failed to take a clear stance which further emboldens TMC & Mamta.

Opposition candidates are barred from filing nomination in Panchayat elections, and every election witnesses mass bloodshed and death. It is a situation where to cling to power, TMC can resort to any means. Hence, all the non-TMC parties need to unite and realize that democracy is in peril in Bengal. Election Commission of Bharat should be apprised that in the upcoming Lok Sabha election, all preventive measures be taken to hold a free and fair election or it would turn out to be a farce as was the case in the last Panchayat election of West Bengal.